The Listener star Craig Olejnik keeps his telepathy a secret

Craig Olejnik, who stars in NBC's upcoming summer series The Listener, told SCI FI Wire that he plays a paramedic with a particular talent.

"My character is telepathic," the 29-year-old Canadian actor said in an exclusive interview at NBC's Summer Press Day in Pasadena, Calif., last Friday. "You ... meet him at the beginning of the show at this point in his life where he's beginning to open up the closet in the sense that his telepathy was always something he tried to avoid and put in the corner. But ... in doing that, he kind of pigeonholed himself into a very solitary life."

The Listener stars Olejnik as Toby Logan, a paramedic who has revealed his telepathic abilities only to his mentor and confidant, Dr. Ray Mercer (Colm Feore). The show follows Logan as he makes his rounds with his energetic partner, "Oz" Bey (Ennis Esmer), helping people and trying to uncover the truth about his past. The Canadian production also stars Lisa Marcos as Detective Charlie Marks and Mylene Dinh-Robic as Logan's ER-doctor ex-girlfriend, Olivia Fawcett.

Following is an edited version of our exclusive interview with Olejnik. The Listener debuts on NBC on June 4 and will air Thursdays at 10 p.m. ET/PT.

Does Toby have friends?

Olejnik: He does have a friend or two, and he works as a paramedic, but in blocking it all out and not dealing with it he hasn't dealt with himself. ... I think around 25 you begin to look into yourself, because you're trying to figure [things] out. ... He's beginning to accept his telepathy and work with it and hit or miss by it. ... Just by virtue of being a telepath paramedic, he's in a lot of situations where it does come in handy and in a lot of situations that are obviously perilous. ... It's never usually a happy situation. So he's getting a lot more from the situation, and he doesn't go home and turn on the TV and forget about it. He becomes driven by it and looks to solve these things, and in doing that, ... ultimately helping people out. It's not his plan to help people out, it's more to help himself out and to figure out what this thing is. [But] he begins to help himself out.

The telepathy thing, is it something that he can't turn off, he just can hear people's thoughts?

Olejnik: Not exactly turn it off completely, if it's a strong emotion, if it's a strong hit, is what we call it on the show. But for the most part, in day-to-day action, he can choose what he's receiving or not receiving. And it comes in the form of audio, it comes in the form of video and audio or video, and it's loose. ... The reality is he ends up sometimes ... going on wild-goose chases because just because we have a thought or an image in our head, it doesn't mean we can act upon it. So that's one of the reasons he's never really openly embraced it and dealt with it and gone after it, because there is a lot of dead ends in this thing. But, also, he does end up helping a few people, and ... in so doing, ... he's kind of following this rabbit down the hole, seeing where it takes him. He has no idea where it's going to take him. ... 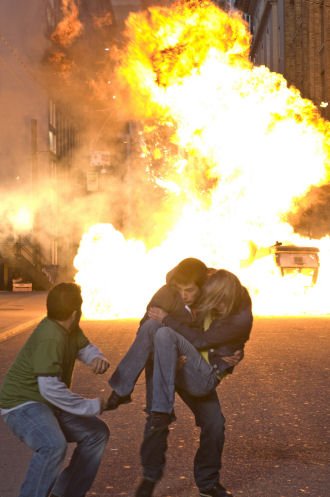 Talk about the other characters on the show that are regulars that you deal with.

Olejnik: I have a paramedic partner. ... We're essentially a duo, a sidekick, a Chris Farley-David Spade kind of ... comedy. ... I'm the straight guy, obviously; he's the funny guy, and he eventually teams up with, you could say, help from a cop. And also another character who's ... a mentor. [Colm Feore], who's his mentor, and ... he helps me deal with my day to day. ... He's essentially my shrink, I suppose. ...

And how many episodes have you shot?

It's interesting to have wrapped essentially the first season before the first episode has aired.