The Lizard does serious damage in new Amazing Spider-Man photos

Just yesterday, Sony released two posters of Peter Parker in costume as the Amazing Spider-Man. Now it's time to see his archenemy in action. They've unveiled two stills, which feature villain of the moment—the Lizard. And he is not a happy camper.

In the top photo, we get a good look at the Lizard's hand, which is holding a camera labeled "Property of Peter Parker." Do you see those nails? We wouldn't want those piercing through our skin.

Are you sick of extreme close-ups, and quick cuts of the Lizard? Do you want to a see a full body shot of the creature? In the following photo, you can see him sporting his infamous lab coat. He's just transformed, and some poor unfortunate soul is about to feel his wrath. 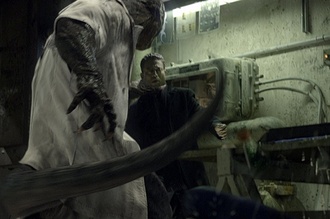 What do you think of the latest photos of the Lizard?