Lost Girl's cast on the 'wild, crazy' ride of sex, Fae and succubi

The temperature's about to rise on Syfy. Take a succubus, a bi-sexual love triangle and a complex mythology involving creatures called the Fae that feed off the human race, and you end up with Syfy's sexy new Canadian import Lost Girl, which premieres tonight.

"The first season really introduces the audience to Bo and her journey going into this whole Fae world that she's recently discovered that she's a part of," said Anna Silk, who plays Bo. "Not only is she Fae, she's actually a succubus. So it's a pretty rude awakening really early on in the season. ... And the different people she meets along the way in that first season really become her makeshift family in this world. Lauren, played by Zoie, and Dyson, played by Kris, are two of the very interesting characters that she meets."

Zoie Palmer plays Dr. Lauren Lewis, a human working for and studying the Light Fae. Kris Holden-Ried is Dyson, a member of the Light Fae race who gets a little wolfy when challenged and who is also a cop.

Bo is "a Fae who's been born into a human family and didn't know she was Fae. [She's drawn into] this entire other world that she didn't know existed," said Holden-Ried. "And my character, Dyson, is one of the ones that find her, just because in his job in the world ... that's kind of his thing. He finds not only criminals, but people who have done things that they shouldn't have done. In other words, Fae who are exposing themselves to humans. He finds Bo and a wild, crazy 13 episodes ensue."

The wild and crazy ride includes lots of kissing, sex and action, promise the actors, as we learn more about Bo and the Fae.

"There are two types of Fae. There's the Light and the Dark," said Palmer. "And I'm a doctor and a scientist to the Light side. And Bo comes to me for some help on how to control some of the things that are happening to her, as she realizes what she is. ... And she comes to me to see if I can perhaps help her" control her unfortunate habit as a succubus of killing her lovers. 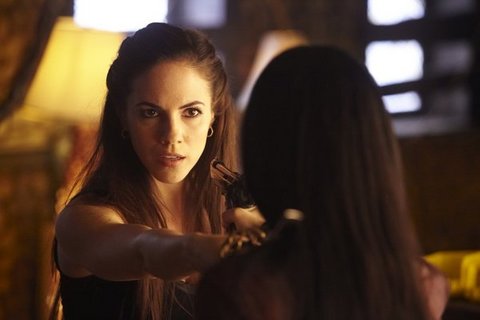 According to Silk, Bo is "coming from a world where she grew up thinking she was human, and she has urges beyond normal teenage sexual urges that resulted in a body count. So she's been on the run for a while," she said. Learning that she's a Fae succubus "answers a lot of questions for her, but it opens the door to many more questions. And that's what we explore in the first season, is how she fits into this world and the relationships she develops along the way."

The love triangle with human Lauren and Fae Dyson is a key relationship for Bo that draws her in two entirely different directions. "I think that everyone who meets Bo, including Dyson and Lauren, are sort of taken with her," said Palmer. "I think Lauren is taken with her for reasons that I don't know that she can explain entirely. And Bo's obviously beautiful. You're beautiful, Anna."

"But there's something about her that draws people to her, and I think that's what Lauren finds right away. And I think it's a surprise that she feels that way. That that happens. She works for the Light Fae, and she does her job, and she's a scientist, and then along comes this sort of creature, this person, this woman who does something to her, and I don't know that's she sure what that something is," said Palmer.

"I think with Dyson it's pretty simple," said Holden-Ried. "The mythology behind Dyson's character has a lot to do with ... he's a protector. The wolf, its entire job in existence was protecting its liege or its king, whoever it was assigned, and in Bo he sees an innocent but beautiful and vulnerable woman. ... I think it's really a deep-seated instinct in Dyson to want to protect Bo. And in doing so, he gets feelings for her."

Dyson has been "in the Fae world for a millennia, and the only thing that's really new for him is this young woman who's come from nowhere, and that's pretty much the center of his journey," he added.

"For Lauren, we discover that she's indebted to the Light Fae, and specifically the leader of the Light Fae, the Ash, for some reason that we don't know," said Palmer. "So it's a bit of a discovery about who Lauren is and where she's from and what her story is." 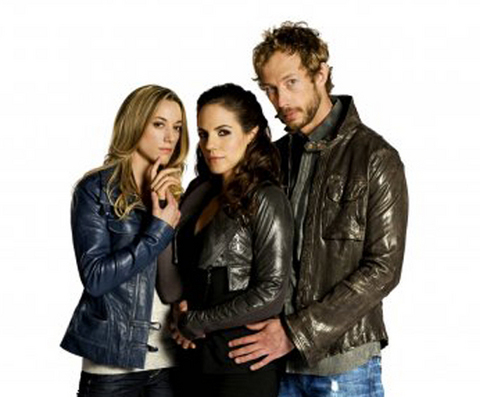 When it comes to the Light and Dark Fae, they have "a really intricate political system, and there's a lot of push and pull between the two sides," said Silk. "That's the world that Bo finds herself in. Not only is she in the world of the Fae, she's in a world that's divided. There's a peace that has be kept between those sides, and that balance is really precarious. Anything could tip that balance and lead to a lot of trouble. ... That's a really big part of the show that I think makes it very interesting. And it's certainly interesting for us as actors to play in."

"All of our characters interact with it in different ways," said Holden-Ried. "I guess the differences between the two systems is, Light Fae try to live in a symbiotic relationship with humanity, and the Dark Fae are more interested in dominating humanity. And that is pretty much the philosophical difference between the two."

While there may be fundamental differences between the Light and Dark Fae, "all Fae need to survive off of some energy system, whether it's flesh, whether it's spirit, whether it's anger," said Holden-Ried. Or whether it's emotional, or sexual. "Humans are the food source for all Fae."

While the mythology may be enormous, the episodes are stand-alone, promises Silk. "There's a new type of Fae, a new creature, a new challenge every episode."

Lost Girl has already filmed a 22-episode second season and has been renewed for a third, with a 13-episode order.