John Carpenter's first movie in a decade is insane

Danielle Panabaker is only 22, but she's already racking up an impressive resume of movie roles in remakes of classic horror movies (Friday the 13th, The Crazies) and working with one of the godfathers of horror, director John Carpenter, with whom she just wrapped the upcoming supernatural thriller The Ward.

After nearly a decade-long absence from features, Carpenter is finally back behind the lens: The horror icon recently wrapped The Ward, currently slated for release this September, which follows an institutionalized young woman (Amber Heard) who is being haunted by a ghost.

We spoke to co-star Panabaker, who plays Sarah, to dig a little deeper on what Carpenter's latest is all about.

"The Ward is about six young women living in an insane asylum," Panabaker told SCI FI Wire. "They are slowly disappearing, one by one. It's one character's journey, Kristen [Heard], to find out what's happening. My character is one of the young women who's more on the promiscuous side. She's the flirtatious sort of attention-grabber of the bunch, which was really fun. I really enjoyed doing something a little different."

The Ward is set in the '60s, which gave the actress her first taste of period work. "It was something I'd wanted to do for a long time," says Panabaker. "It has a very different color scheme to it. Researching the wardrobe and that sort of thing was also useful, just to understand how conservative everything was at that point in time." 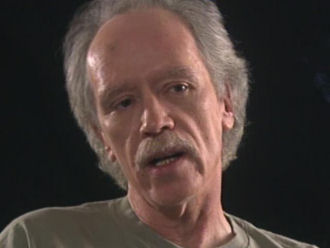 Panabaker has had a taste for horror of late. After racing from a machete-wielding Jason Voorhees last year, she shot a remake of George A. Romero's The Crazies, which hits screens on Friday. But the actress said she couldn't turn down the chance to work with one of horror's forefathers.

"You know, the irony is, when I first started working with John, being a big nerd, I Netflix'd him," says Panabaker with a giggle. "There was a documentary on him, and Romero was actually interviewed about John. They're both such iconic grandfathers of horror. They really pioneered the genre. I'm thrilled to have been able to work with both of them."

"[Carpenter] has such command of the set," Panabaker adds. "He's so very clear and specific about exactly what he wants. I really loved it."

We pressed Panabaker to find out what exactly lands her character in the loony bin, but she remained tight-lipped: "I can't tell you that. You'll have to wait and see the film."

The Ward is slated for a Sept. 24 release.