You may not have heard of Percy Jackson, but you know his family. Percy Jackson & The Olympians: The Lightning Thief is based on Rick Riordan's book, which in turn is based on Greek mythology, and the film's star, Logan Lerman, walked us through the real myths behind the movie.

Lerman spoke with us exclusively by phone this week. The film opens today. (Click on the images for larger versions.) 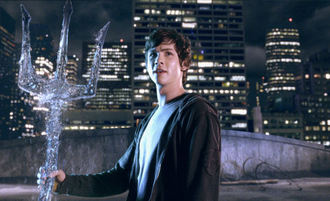 1. From Mt. Olympus to the Empire State Building

In Greek mythology, the gods sat on Mt. Olympus. Poseidon was the god of the sea, Aphrodite the goddess of love, Apollo the god of the sun, Ares the god of war, etc. Zeus was the king of the gods. They all got into business with humans, though, including but not limited to love affairs and wars. In Percy Jackson, the Empire State Building is the portal to Mt. Olympus where the gods still make trouble for people.

2. From demigods to teen heartthrobs

In Greek mythology, the demigods were the offspring of a god and a human. You might have heard of demigods such as Hercules and Perseus (soon to be seen in the Greek-inspired Clash of the Titans). Percy Jackson is this generation's demigod, son of Perseus Poseidon and Sally Jackson. "This is taking a demigod, the original heroes of storytelling, the heroes like Hercules and Perseus, just adding onto those myths," Lerman said. "I think a lot of people [will] really love to watch movies about these modern day demigods. 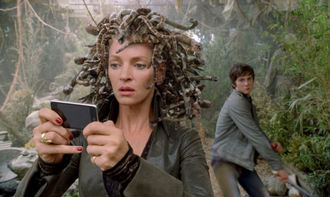 3. From shields to iPhones

You may know the legend of Medusa from Greek myth as a Gorgon daughter of Phorcys and Ceto. Or maybe as the snake-headed monster from the original Clash of the Titans in 1981. Either way, she turns men to stone who glance at her. Taking a cue from the original Titans film, Percy battles Medusa (Uma Thurman) with modern technology. "Perseus cleverly thinks of how he can battle her by looking at her through a reflection, and he uses his shield as his mirror," Lerman said. "We introduce it to a modern audience by replacing the shield with an iPhone. You kind of trick the audience into learning these myths and they don't even realize that these are original stories."

4. From Lake Lerna to Nashville

In the myth of the 12 Labors of Hercules, his second task was to kill the Hydra in Lake Lerna. Problem is, when you cut off a Hydra's head, two more grow back. Percy Jackson battles the Hydra in the Parthenon museum of Nashville (above). "Best monster battle would be the hydra sequence," Lerman said. "All those times you see Percy flying around in the air and chopping off the heads of the hydra, that's really me doing it. It's not animated people most of the time. Doing the flips in and out of the wires and having the shield in one hand, it's hard work. It takes a lot of time and effort into it. Hopefully people don't notice it, it just flows smoothly." 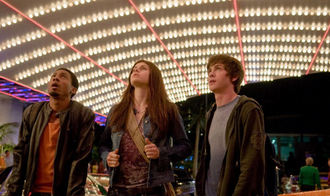 5. From The Odyssey to Vegas

In Homer's epic poem The Odyssey, winds blew Odysseus and his crew to the land of the Lotus Eaters, who fed his crew flowers that made them want to stay. Odysseus had to drag them back to the ship. In Percy Jackson, Percy and his friends enter the Lotus Casino in Las Vegas. There, the hostesses feed them flowers that give the kids such euphoria they never want to leave. When Percy finds a kid who's been there since The French Connection came out, he realizes he has to get his friends out of there.

This one doesn't change much. Hades likes to kidnap people and keep them in the underworld. Non-dead people would have to enter his lair to bring them back. Orpheus had to go to rescue Eurydice. Now Percy has to go bring back his mother. The film does mention the legacy of underworld rescues so that the kids get a little education. "The movie is entertainment," Lerman said. "You go through it, it's a ride from beginning to end but you leave the theater with a knowledge that you don't realize that you had. You can know nothing about Greek mythology and learn something new or you can have a knowledge of Greek mythology and really enjoy how it's transferred to this audience, to the modern day."

For the latest sci-fi news, follow us on Twitter at @scifiwire
Tag: Percy Jackson & The Olympians: The Lightning Thief
Close Search Return to SYFY homepage.