In the upcoming animated film Planet 51, Capt. Chuck Baker (Dwayne Johnson) has discovered a new planet. That's news to the green inhabitants who are fairly certain they live there already, and that he's the alien. Their culture is almost exactly that of Earth in the 1950s, an innocent time where the biggest fear was alien invasion. Chuck must enlist the help of Lem (Justin Long), a young resident of Planet 51, to get back home to Earth in sort of a reverse E.T. scenario.

17 greatest animated sci-fi features in the galaxy, ranked
What we saw when we previewed footage from Planet 51

The film was created by Ilion Studios, and the video game by Pyro Studios. SCI FI Wire got a chance to tour both facilities in Madrid last month and learn about the process of creating the studio's first animated film.

Ilion Animation Studios, along with Zed and Pyro Studios, were founded and are run by Ignacio Perez Dolset and Javier Perez Dolset. Planet 51 is their first animated film. Pyro Studios, creators of the best-selling video-game saga Commandos, is actually right down the hall. Being in the same building allowed the studios to work closely on every aspect of the project.

Ignatio Cajigas gave us a tour and told us that the studios, which employ people from many different countries and backgrounds, do their work mostly in English. In fact, there are English and Spanish classes on site.

Ilion created more than 100 tailor-made applications for the film in-house over the past six years. One such innovation was the "Mask Creator," which is "a powerful system of facial animation which gives life to faces," Cajigas said.

We got a chance to see this in action. On a split screen, we see the face of the character Lem. On one side is a line map of the face, and on the other a finalized character drawing. As the technician moves his cursor over the map, the face on the other side moves as if rubberized.

This, we are told, not only gives a greater range of facial expressions and a continuity to the features of each character, but also saves loads of time for the animators, who have 400 characters to tackle. We are also told that with this new process, it takes one day to animate one face. 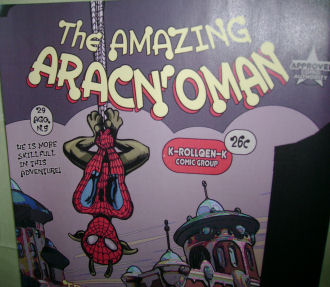 One animator showed us a video of himself acting out a shot, lip-synching to an actor's voice, which he then uses as an animation guide to get realistic expressions. Most of the animators have mirrors at their desks for the same purpose. Virtually every scene is acted out in this fashion. Cajigas said that workers in neighboring buildings were amused watching the animators in the parking lot pretending to shoot each other with cardboard guns.

We also observed the process from beginning to end. First, characters are created and given to a storyboard department, which creates 16,000 vignettes, which are then animated. Once decisions are made as to which ones work, the storyboard is animated and sent to the layout department. A low-resolution 3-D layout then becomes a guide for the rest of the departments, and the tasks are laid out.

The animation department only works on the characters; the set dressing department adds the landscape. For this film, the landscape department has based its design for the movie's environments on flying saucers. As we watched the film, we noticed that the backgrounds feature round mountains and cars that look like saucers. Even the houses have a rounded, disk-like feel.

The film is also keyed to 1950s American culture, and every effort is made to reference TV, films and pop culture and turn them into a Planet 51 version. A wall of test drawings includes the film's version of a Statue of Liberty, pyramids, movie posters (Arach'no Man instead of Spider-Man) and, though they were not used in the final film, Planet 51's version of Star Trek characters.

The next stop is the lighting department (which is referred to as the "vampire room" because the light is dimmed to cut down on reflection) and the department where the effects are added. We watched as animators created an explosion, showing us each layer as it was added to create a glittering fire effect. It was pretty impressive, as there are about 15 layers for each effect.

Finally, we were taken into a dark hallway, where, behind a window, we saw the "render farm," a massive bank of computers that looks like a giant black box with thousands of blinking lights, filling an huge white room. Cajigas explained that this is the heart of Ilion Studios, where all the rendering and all the graphic information from every department is put into the frame. The farm processes a staggering 40 terabytes per second of data, and there are only five machines like it in Europe. The security is so heavy in this area that even our tour guides had to spend 15 minutes hunting down a key.

Planet 51 will be released on Nov. 20. A tie-in video game launches at the same time.