11 most disturbing Treehouse of Horror segments from The Simpsons

The Simpsons celebrated a macabre milestone this year, airing the 20th installment of its annual Treehouse of Horror Halloween episodes. So for the 19th of our 31 specials for the 31 days of Halloween, we hope to spook you with 11 clips of some truly scary Treehouse moments. These aren't necessarily the bloodiest, but they're definitely the most disturbing overall.

Check back tomorrow at noon when we reanimate the spookiest space zombies.

The Simpsons: Kristen Bell to guest-star in Broadway-inspired musical premiere for Season 33
10 actually scary movies and shows you can stream on Disney+ 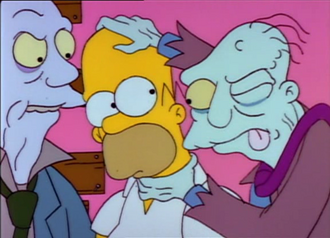 Bart was into zombies 17 years ago, long before any trendy 21st Century writers. From the moment when tortured faces howl from the pages of Bart's book of spells to the instant when trusted authority figures such as Principal Skinner succumb to brain-eating fever, the scenario of a Springfield under siege (there's even zombie radio!) is unnerving. (We weren't able to embed the clip, but you can check it out here at 14:22.) 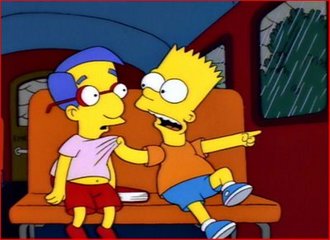 This re-imagining of the famous episode of The Twilight Zone, "Nightmare at 20,000 Feet," glories in the depths of paranoia, as Bart fails to convince anyone of the imminent danger to their schoolbus, until he's finally driven to cackling insanity. As with the severed, talking head of Principal Skinner in our previous selection, the decapitated noggin of Ned Flanders forms a similarly unsettling motif. (The clip can be found here, starting at 8:00.) 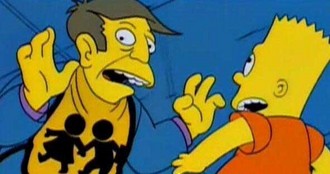 Cannibalism always presses instinctual buttons of revulsion, and this scenario, where adults at Springfield Elementary turn the student body into "Sloppy Jimboes" and other culinary delights, is no exception. The fact that Bart and Lisa plunge headfirst into a giant Cuisnart is just gravy on the manwich. (The clip can be found here starting at 14:42.) 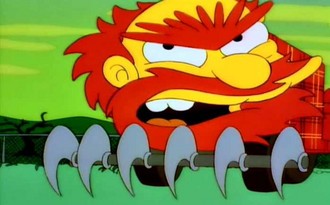 Watching Groundskeeper Willy become an incinerated corpse in this parody of the film series A Nightmare on Elm Street is a shocking corollary to the gruesome deaths the dream-haunting Scotsman inflicts on various students whenever they fall asleep. Martin Prince's death throes are epic. (The clip can be found here, starting at 6:31.) 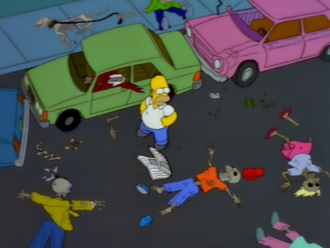 The postapocalypse comes to Springfield, leaving a town full of easy-to-shatter skeletons—save for Homer Simpson. But the truly gut-wrenching sight here is that of Homer dancing nude in church to a hit by War, until surprised by hideous mutants. Richard Matheson's novelistic inspiration never ventured into such eye-scalding territory. (The clip can be found here, starting at 1:04.) 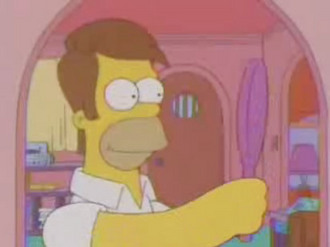 The graphic electrocution of arch-criminal Snake is followed by the image of insidious scalp tendrils from his donated hair worming their way into Homer's brain. A potent one-two punch. But it's Homer's casual assumption of Snake's slimy, murderous ways that is most disturbing as a reversal of his carefree clownish image. (The clip can be found here, starting at 00:34.)

Treehouse of Horror X: "Life's a Glitch, Then You Die" 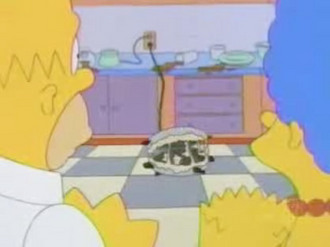 Homer's laziness and technological ineptitude are all-too-believable triggers for a global computer catastrophe. Dick Clark's android secret identity, Krusty's pacemaker implosion, and planes falling from the sky culminate in a When Worlds Collide sequence where the horrors of Pauly Shore and Tom Arnold prompt Bart and Homer to explode their own heads. (The clip can be found here, starting at 13:33.) 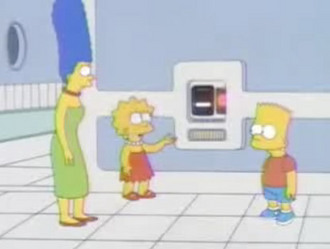 Domestic scenes are perfect foils for horror: coziness and the safety of the hearth, versus intruders and deadly danger. So when the famous house at 742 Evergreen Terrace gets remodeled to incorporate an artificial intelligence resembling Hal 9000 from 2001: A Space Odyssey, the stage is set for death by razor-blade garbage disposal. Note the guest appearance by the "electric hammer" that Homer invented previously. (The clip can be found here, starting at 7:21.)

Treehouse of Horror XIII: "The Island of Dr. Hibbert" 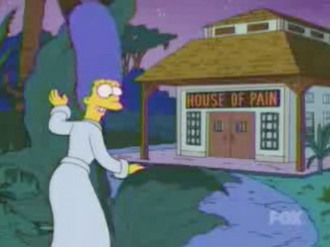 This variation of Wells's The Island of Doctor Moreau turns the familiar cast into their poetically appropriate animal counterparts, and the effect is as oddball as a convention hall full of Simpsons-cosplaying furries. Dr. Frink's turkey death scene is rivalled only by the creepy scene where Homer has to milk cow-centaur Flanders. (The clip can be found here, starting at 15:37.) 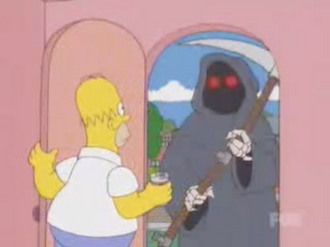 One simple thought experiment—what would happen in a world without death?--is gruesomely depicted. But then, Homer himself becomes the Grim Reaper and begins inflicting numerous fatalities, justified or not, with a mere poke of his bony finger. Homer's seeming complicity in the death of his beloved Marge is the biggest shock--until we experience a nice twist ending. (The clip can be found here, starting at 1:26.

Treehouse of Horror XVI: "Survival of the Fattest" 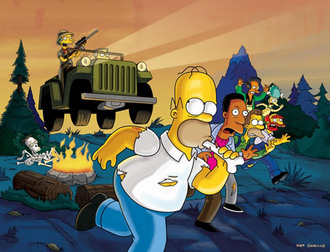 One of the suspense genre's most perfect stories--"The Most Dangerous Game," by Richard Connell--receives a brilliant adaptation here, a version where Mr. Burns assumes the role of rich illegal manhunter. The sheer bodycount is awesome, even though the deaths are merely from bullets, not from zombies, robot houses, or Y2K bug. Apu even has to die multiple times, thanks to reincarnation. Commentary from network sportscasters adds to the black humor. (The clip can be found here, starting at 9:44.)