With director Guillermo del Toro out and about promoting his debut novel The Strain, he's also been dropping some juicy casting details for some of his upcoming high-profile projects, including The Hobbit and Frankenstein.

In particular, last week he told Sci-Fi Squad that his longtime performance collaborator Doug Jones (Hellboy II) would be involved in The Hobbit and, more important, would play the monster in his remake of the horror classic Frankenstein.

A thorough examination of The Shape of Water's sex scene and Fish Man anatomy
8 reasons why Guillermo del Toro's Hellboy II: The Golden Army is an underrated gem

We tracked down Jones at this weekend's Wizard World Philadelphia convention, where he told SCI FI Wire in an exclusive interview that he's been finding out about all of his exciting future roles, not directly from del Toro's mouth, but from the Internet like the rest of us. But he added that he'll be taking part in a makeup test for Frankenstein soon.

"We have not had any conversations about what he wants [for The Hobbit]," Jones explains, "but he's 'wink-wink, nudge-nudged' me a couple times with that 'Yeah, yeah, The Hobbit, yeah, we'll see you,'" Jones told us. "I don't know what I'm doing or how many characters it will be, because he tends to like to use me the whole time depending."

Jones says he's already cracking the books to prep for his trip to the Shire. "Yeah, I did review The Hobbit already, so when he tells me what character I'm playing I won't be like, 'Well, who's that?'" he said with a laugh.

As for Frankenstein, which del Toro says won't go under the lens for about five years, it is moving forward this summer in preproduction development, which will heavily involve Jones as the iconic monster.

Jones laughs a bit when he explains that "Guillermo did say to the press that he's already cast me as his monster, but we've yet to talk about it. But in his mind, if that's what he's decided, then it's done. He's got a four-picture deal with Universal, so once he's done with The Hobbit, I think the first thing that's up on the docket will be Frankenstein. And reinvention is going to be the name of it, because he's going back to the Mary Shelley book and starting fresh with it."

Already known in the industry for his cavalcade of prosthetic-based creature characters in everything from TV's Buffy the Vampire Slayer (in which he played a creepy, silent Gentleman in "Hush") to the terrifying Pale Man in del Toro's Pan's Labyrinth, Jones says he's overwhelmed by the mere idea of playing Shelley's iconic creature as interpreted by del Toro.

"I go weak in the knees, and I lose blood in my brain," Jones enthuses. "It would be a dream come true. Boris Karloff as Frankenstein and the Mummy are two films that haunted my childhood. To be equated with him or to be in a property that he started on film is daunting and intimidating but also such a huge honor."

For now, Jones says he will meet with del Toro very soon.

"We are starting makeup tests, actually, in a couple weeks," Jones said. "We are going to do some tests just to see, because he has five years to play with this. He's taking that luxury of time to make this absolutely perfect. This is his dream. He was inspired by Frankenstein when he was a kid. It was the monster that made him want to make monsters. So, because of that, it's been [a] lifelong [dream], and he wants to be perfect with him." 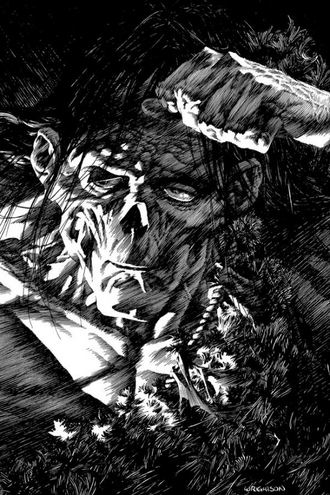 Jones also revealed that del Toro's creature would be based on the artwork of famed horror illustrator Bernie Wrightson, who spent close to a decade creating pen-and-ink illustrations for a special print edition of Shelley's Frankenstein. "It will not be a big, lumbering Boris Karloff type, but more of a skinny, skeletal, stringy-muscled version made from spare parts of some other guy," Jones said. "The designs I have seen so far of the makeup test we are going to try brought tears to my eyes. I can't tell you what I saw, but just know it brought tears to my eyes. I was emotionally touched that I may get to play this character."

As if that weren't enough, Jones says not to count del Toro out for a third Hellboy somewhere down the line. "The idea of the storyline is in Guillermo's mind," Jones says. "He knows exactly the story he wants to tell, and he's hashed it out with [Hellboy creator] Mike Mignola as well. Now it's just a matter of time, and ... if Ron Perlman wants to don the makeup again. It's hard on all of us, and Hellboy II gave us a run for the money: six months, six days a week, 18 hours a day, so it took its toll. But when I see the finished product, it's worth it, and I would do it again. If there is a Hellboy 3, Doug Jones will be in it."

Outside of del Toro's world, Jones says he's uncertain about the future of the proposed Silver Surfer film, which was to spin off from Fox's now-defunct Fantastic Four franchise. Jones acted the part of the Surfer (which was voiced by Laurence Fishburne).

"I wish I knew what to tell you," Jones says with a sigh. "I keep hearing different things from different sources, but no one has ever called me directly. I had a three-picture deal, and I have two more to go if they want to use me. As for making the films, I just don't know."

In the meantime, fans of Jones can catch him in the upcoming Spike TV movie Angel of Death, premiering in July. The film stars kick-ass stuntwoman/actress Zoe Bell (Deathproof) as a Mafia hitwoman, and Jones is her heroin-addicted Mafia doctor. "I've got my issues," the actor said with a laugh. "But the film also features Lucy Lawless and Ted Raimi."