If you thought the only new thing you'd be seeing in the latest Doctor Who Christmas special was companion Jenna-Louise Coleman, think again. Turns out we may be seeing a brand-new TARDIS interior as well, and we've got the first image fresh from the BBC.

The TARDIS has had only one overhaul since the series started back up in 2005, but new control rooms are hardly rare. Major changes have occurred during many of the classic Doctors' eras. Heck, Tom Baker hung out in a wood-paneled, secondary control room for a while, and the console itself has changed a dozen or so times since 1963.

AMC, BBC America announce premiere of 'Doctor Who: Fury from the Deep' plus new genre slate
Astronomer: 7 TV scientists that even real scientists approve of

But that doesn't make change any less exciting or likely to incite a fan riot. But if you're going to make changes, it's go big or go home, right? So let's take a look at this sneaky little picture to get an idea of what we have in store. 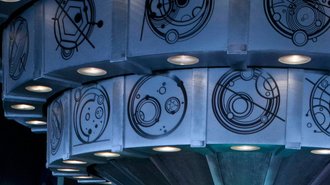 So it looks like we're trading out the steampunk for something a little more sleek. White is a pretty classic TARDIS interior color, and the Gallifreyan symbols are a nice touch. All in all, looks promising, and it's definitely a big change from either console we've had since 2005.

Oh, and don't forget to check out all the other images that are out for the Christmas episode!