The Vampire Diaries: Big sex, blood and violence ahead!

Last week on the CW's Vampire Dairies, the Salvatore brothers tangled with one angry vampire named Frederick (Stephen Martines), who was none too happy that he'd just spent 145 years mummified and trapped in a tomb thanks to Stefan and Damon.

On tonight's episode, "Let the Right One In," it's "a very big, epic episode" that sets up the rest of the season, said executive producer and co-creator Julie Plec. "Stefan [Paul Wesley] is in grave, grave danger at the hands of the tomb vampires, and Elena [Nina Dobrey] has to work with Damon and Alaric to rescue Stefan and put her own life on the line in the name of love, knowing that life without Stefan isn't really a life that she wants to live. There is a huge rainstorm that hits the town, and it's just like the whole episode is just like crazy, crazy big."

Damon and Alaric? Bad-boy vampire Damon, who would have killed Alaric (Matthew Davis) if the high-school teacher wasn't wearing a special ring his former wife gave him before she let Damon turn her into a vampire? That Alaric?

"Alaric is going to be there helping out, much to his own chagrin," Plec said. "He hates Damon. He's never going to do anything but hate Damon. But the two of them in their mutual dislike of each other are actually going to be quite fun partners in the latter half of the season. So that will be something to look forward to." 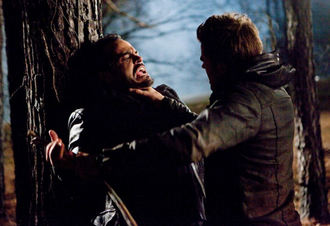 As for Damon (Ian Somerhalder), who's been on a booze, blood and bimbos bender, "we start to see Damon, as he comes out the other side of that, develop a connection with Elena that is borne out in this particular episode," she said. "Damon gets to play a little bit of the hero for the first time, instead of the villain. Damon and Elena's growing understanding of each other is a large part of where we're going for the rest of the season, and how that ultimately impacts Elena's relationship with Stefan."

Then the last five episodes will build up to the 150th anniversary of the charter of Mystic Falls with the annual Founder's Day celebration. According to Plec, it's "sort of crazy. ... This year is particularly important because it is a big anniversary. We know what happens in this town when the Founder's Council starts to become aware of vampires again, which could be very catastrophic for all the vampires that we care about. Vampires are vampires in their mind; they're not going to discriminate between good and bad."

But what would The Vampire Diaries be if there weren't some romantic issues to deal with as well? 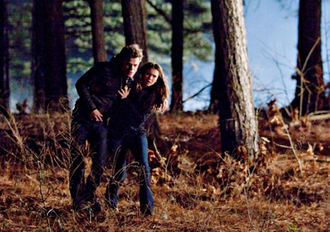 "We're also putting a huge, huge roadblock in the relationship between Stefan and Elena that almost tears them apart for forever," Plec said. "But ultimately the question is will their love conquer all or will Damon get in the middle of that? Will Damon find himself alone at the end again? How will the return of the tomb vampires shake up everyone's life?"

While Plec isn't about to give away too many details, she does promise The Vampire Diaries will end its first season with a cliffhanger. "All cliffhangers, all the time. That's how we roll," Plec said with a laugh. "It is infuriating for the fans and exhilarating for the fans. And I don't think they'd have it any other way."

The series airs on Thursday nights at 8 p.m. ET/PT and has been renewed for a second season.