There's a new toy in Toy Story 3, and you can own him

When the 3-D Disney/Pixar animated sequel Toy Story 3 hits screens on June 18, Woody and Buzz will be joined by some new toy friends, including the nefarious pink Lotso (or Lots-o'-Huggin' Bear), voiced by Ned Beatty, and Mattel's iconic Ken doll, voiced by Michael Keaton, and actual toy versions of the characters were introduced at New York Toy Fair over the weekend.

On Sunday, when Disney Consumer Products kicked off the start off the 107th American International Toy Fair in New York, director Lee Unkrich told us that "Toy Story 3 has ended up having more unique characters in it than any film at Pixar."

Firsts: The first all-CGI character, made before Pixar became Pixar
How Rapunzel changes everything for the Disney princess film

Some of them are featured in Mattel's new Toy Story 3 6-inch action figure line, including a triceratops (voiced by Kristen Schaal), Mr. Pricklepants the Hedgehog (voiced by Timothy Dalton) and the heavy of the film, Lotso.

Of Lotso, Unkrich revealed that the character was actually created years before the first Toy Story films. "We were coming up with ideas for our first features named Lotso, but for one reason or another he never made it into the first two stories. As we often find out at Pixar, good ideas never go away, they just sometimes lay dormant for a while."

Thinkway Toys is actually creating the plush version of Lotso, which smells like strawberries and interacts with 45 different phrases.

As for Ken, Unkrich said, "We were thrilled Michael [Keaton] was game to play Ken for us. He's awesome and steals every scene that he's in. Once you see the film you will never be able to match the character to anyone else. Our Ken is very much stuck in the '80s. We can't wait for the world to see what we've done with him."

Fresh from his induction into the Toy Industry Hall of Fame the night before, Pixar and Walt Disney Animation Studios chief creative officer John Lasseter took to the Toy Story themed stage and reminisced about his own love of toys and how that turned into the inspiration for the now three-film franchise. 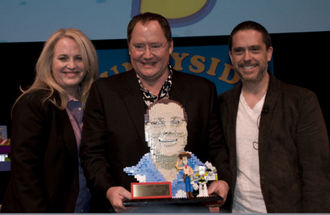 Lasseter (above, center) was joined by Toy Story 3 producer Darla K. Anderson (above, left) and director Unkrich, who were taking a quick break from post-production on the film in Emeryville, Calif., to share more details about their latest endeavor with the audience of parents, kids and press.

According to Anderson, there are 10 more weeks to go until Toy Story 3 is completed, after four years of continuous production.

As the editor of the first two films, Unkrich is now the sole director of Toy Story 3, which he said "is one of the most emotional films that we have made."

As shown in the first full theatrical trailer released last week, the third film picks up with Andy turning 18 and leaving for college, and he's packed up his youthful things as he starts on his journey into adulthood. For Andy's beloved toys, that means being collected into a charity box to be given away.

"In the past 15 years, we have all gotten to know Woody and Buzz and the rest of the gang in the Toy Story world, but in the case of Toy Story 3 we really wanted to put them all into a situation where we didn't know how they were going to react," Unkrich said. "At the end of Toy Story 2, we said that the toys knew that Andy was going to grow up some day, and they seemingly made their peace with that fact. But as we all know, it's one thing to make peace with something that happens in the abstract future, but it's another thing to find yourself at that day."

The director didn't want to spoil much about the movie, but he did explain that the toys end up at Sunnyside Daycare, "which is a seeming utopia retirement home for toys. They think it's going to be the perfect way to spend the rest of their years, because the kids there never grow up. Every year there is a fresh new batch of kids, so they never have to fall in love with a kid and have that kid grow up. However, when they get to Sunnyside they find out things are not quite what they were hoping for."

Unkrich confirmed that the entire original voice cast is back, including Tom Hanks as Woody, Tim Allen as Buzz Lightyear, Don Rickles as Mr. Potato Head and Jodie Benson as Barbie. He also added that character actor Blake Clark will take over the role of Slinky Dog from the late Jim Varney, who died in 2000.

The bulk of all of the Toy Story 3 figures and playsets from Mattel, Lego, Thinkway, JAKKS Pacific and Hasbro hits stores on May 1.