Things getting hotter on the ubersexy Vampire Diaries

With only three episodes remaining in The CW's hit The Vampire Diaries' first season, things aren't going to get any easier for hot high school teacher Alaric Saltzman, actor Matt Davis told us in an exclusive interview. (Spoilers ahead!)

So far Alaric has suffered through his wife's death (he thought) and her secrets, infidelity and desire to become a vampire. Beyond that, he was even kind of killed by Damon. But with vampire wifey Isobel (Mia Kirshner) swooping into town next week and with other puzzling goings-on—mostly courtesy of Jonathan "Uncle John" Gilbert (David Anders)—life is about to get even more complicated.

"Sex, drugs and rock 'n' roll ... it's all going to come out," said Davis with a laugh. "It is such a well-crafted show, and every script is better than the last one. There are so many things that are being told and then threaded throughout. I think everyone is going to be really pleased with the way this season ends."

As to how the season ends, it's going to be big. "The Founder's Day is the backdrop to all of this, so the stage is set," said Davis. "Alaric and Damon and Stefan find themselves to be unlikely allies against the mysterious Uncle John, who is now in town to get a hold of the mysterious invention. So we're in a race against Uncle John to get this invention into safe hands. That storyline takes the three of them on a lot of twists and turns, and all the other storylines are unfolding at the same time."

Of particular interest to Alaric, of course, is the return of Isobel, who is not in town to see him. "Alaric is unfolding before me as [the story goes] along, which is really exciting," he said.

One of the most surprising developments this season has been the pairing of Alaric with his would-be murderer, Damon (Ian Somerhalder). They joined Elena (Nina Dobrey) to rescue Stefan (Paul Wesley) from the tomb vampires, and now they're teamed up again when it comes to dealing with Uncle John. 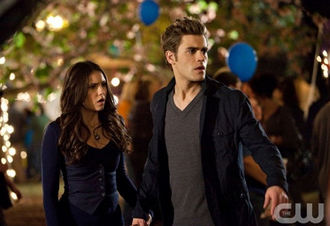 "I absolutely adore Ian. He's such an amazing person on so many levels," said Davis. The 31-year-old actor considers himself to be the "old man" on the set, especially considering that Somerhalder is all of six months younger than him. "We have so much fun working together, so when the camera's not rolling we're just cracking jokes and having a good time. Then when it's on we're still having fun, even though our characters could usually kill each other or want to kill each other. Underneath it, we're just having a blast."

As for getting killed by Damon earlier this season, a shocking moment that left more than one fan with the thought ... "Oh, no! You can't kill off Alaric!" Davis wasn't worried at all that it might be the end of his character when he read the script. "I had a contract in place for more episodes, so I knew they weren't going to kill me. I just wasn't sure how they were going to bring me back."

Little did he know that his resurrection would lead to one of the most interesting developments on the series, now that the vampire-protecting magic ring that Isobel gave Alaric (before she ran away to become a vampire) has thrown a roadblock in Damon's killing-anyone-who's-a-threat-to-him ways, especially since Uncle John has one of them, too. When asked whether we'd find out more about those magic rings, Davis only hesitantly responded, "Maybe."

What we do know is that The CW has already renewed The Vampire Diaries for a second season, and Alaric's chances of surviving season one and becoming a part of season two are looking very good. "There is a possibility. It is a likelihood at this point," Davis says.

Another likelihood is that Alaric probably won't find happiness anytime soon, and that's the way Davis wants it. "I personally wouldn't want the happy ending for Alaric. I think it would be rather boring," he said with a laugh. "We'll see. Time will tell."

The Vampire Diaries airs on The CW on Thursday nights at 8 p.m. ET/PT.