To fight Predators, its star bulked up and gave up sex

It took Arnold Schwarzenegger to defeat the creature in the original Predator, but in the upcoming sequel, Predators, the central character is played by Oscar winner Adrien Brody, who isn't quite the same physical presence but who still bulked up and gave up everything for the role.

"I put on 25 pounds for this role," Brody said in a press conference Saturday in Austin, Texas, at the South by Southwest film festival. "That wasn't the point. They didn't hire me to be a bodybuilder. I'm not a bodybuilder, but I felt in order to be playful with it as well I shouldn't be strapped. It's not the physical strength that outsmarts an alien with energy-based weapons and high tracking skills and a culture of hunting and trophy hunting. You have to outsmart them."

Predators stars Brody, who plays against type as Royce, a black-ops soldier brought to a hunting planet so that the alien Predators can study the most skilled human warriors. Brody went all "method" to prepare.

"My nightly ritual was like poring over survival manuals and military and paramilitary training books," Brody said. "I was reading Sun Tzu, I was studying meditation, I was on a very strict diet, I wasn't drinking, I wasn't eating sugar, I wasn't having sex. I was very focused. I had to kind of go there, for me, because this is a tremendous opportunity for me." 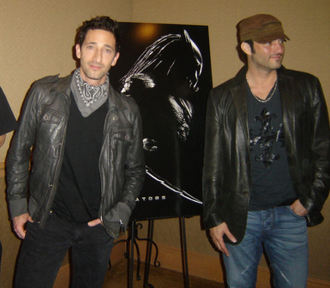 Adrien Brody (left) with Robert Rodriguez at South by Southwest

Producer Robert Rodriguez and director Nimrod Antal said they wanted to hire "real actors" to play the humans so that you could believe they were going through this alien hunt. Brody concurred. "I approached this with a level of focus I would approach any of the roles that I've been given an opportunity to play," he said. "I think my intention, and I think the intention of hiring me to play Royce, was to delve into a kind of flawed, tragic hero and not this kind of typical overtly physically imposing character."

Admittedly, Brody would get too method sometimes. Antal kept him from going all Col. Kurtz. "Nim's my boy," Brody said. "Nim's really looked out for me in this process, and I appreciate that. He's constantly tried to keep the focus very, very much on what needs to be there, what the moment needs, and not lose track of that in keeping the Predator a serious threat where there were techniques I would come up with in my reading. 'How about this? How about if I set this kind of trap? Would this work if we did this?' It might work, but we had discussions of it might kind of weaken my own character if Predator fell for a certain trap. So there were things it was great to have Nim's insight in the overall picture, where I'd get carried away with 'I know how to blow the guy up this way, this way.' So it's great, it was really wonderful. I'm very excited."