Next year will be Doctor Who's 50th anniversary, and current Doctor Matt Smith's already stated that he wants as many previous Doctors in the special as he can possibly get. More than a few have already agreed ... but the Fourth Doctor, Tom Baker, wants something special first.

So, to take a head count: Smith's Eleven is on board, of course; the Tenth Doctor (David Tennant) is more than ready to come back for it; the Eighth (Paul McGann), Fifth (Peter Davison), and Seventh (Sylvester McCoy) Doctors all wanna do it, too; and presumably Sixth Doctor Colin Baker's more than willing to give it a go. (Christopher Eccleston has already made it clear that he's not going to participate.)

While at Collectormania 18 in the U.K. this past weekend, an epic Doctor Who reunion of sorts took place when Doctors Four through Eight all appeared together on one stage to talk all things Who and, obviously, about that little 50th-anniversary thingy. 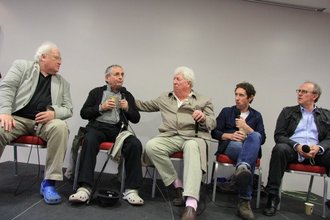 The first one on stage was Baker, who got asked rather quickly whether he'd consider appearing in the special ... to which he promptly said:

"I think if they ask me nicely or I can see what they want me to do, I'd consider it. I think the fans have been so good to me, they'd expect me to at least make an appearance."

As some of you will already know, a quarter of a century ago, Tom Baker notoriously declined to appear in Doctor Who's 25th-anniversary special, called "The Five Doctors," so stock footage of the character was used instead. Maybe that stayed a bit with Tom Baker?

Have a look at the videos:

What do you guys think? Are you happy that Baker's willing to step back into the TARDIS for Doctor Who's 50th anniversary? But more importantly, will he bring jelly babies to the party?