Transformers 2's Tyrese Gibson on the pressure to deliver another blockbuster

Tyrese Gibson, who reprises the role of Epps in the upcoming Transformers: Revenge of the Fallen, told SCI FI Wire that he's got more to do than in the original blockbuster and that his character is "bumped up a lot."

The actor-singer-producer-comic-book-creator also revealed that he's completed another genre film, Legion, and said that there's no news of merit to report on the long-gestating film version of Luke Cage.

SCI FI Wire spoke to Gibson by telephone a few weeks ago. The following are edited excerpts from our exclusive interview. Transformers: Revenge of the Fallen opens on June 24, and Legion is set for release in 2010.

How happy were you with the way the first Transformers film came together and how your character, Epps, came across?

Gibson: I was really happy with everything, man. I didn't want any more presence or any less presence. I thought it was just enough, so I'd have a quick few moments to help get the film from start to finish.

And what is Epps up to in Revenge of the Fallen?

Gibson: My character has been bumped up a lot in this one. My responsibilities are more intense, and he's under more pressure. I'm now [Chief] Master Sgt. Epps, which is [one of] the the top [enlisted] rank[s] in the Air Force. We've got to keep these bad guys off of us.

Was the sequel an easier shoot because it was the second time around or tougher because of the pressure on director Michael Bay and all involved to top of the first one?

Gibson: There was so much more pressure making this one. The first one, we were in there figuring things out, then hoping we find an audience. The second round, there was more of a responsibility to make it as special as we can make it. The pressure was on, man, because the failure of part two is not even an option. But it is going to live up to the hype and then some.

If there is a Transformers 3, would you want to come back, and, if so, what else would you like to see for Epps?

Gibson: I definitely want to be involved. This is my baby, like it is everybody else's. For me, I just hope that Epps survives the lifetime of this franchise. That's about it for me. 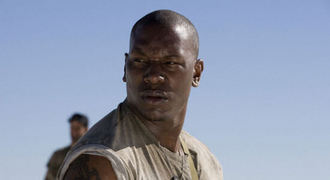 You've got another film in the can called Legion. What's that about, and what do you play?

Gibson: My role is Kyle. It's an apocalypse type of film where these forces are trying to stop the birth of Christ. It's a very heavy type of film. It's with Paul Bettany, Dennis Quaid and Charles Dutton. We were on the set every day, and it was just a heavy film, spiritually, to be dealing with these moments from throughout the Bible. Kyle is a guy who is on his way to court, dealing with some stuff on the personal side. I pull over at this restaurant for some directions and end up getting sucked into the matrix.

And what's the latest on Luke Cage?

Gibson: From what I hear they're still just writing on it and just trying to get it right. They have me in mind, but we'll see. I'm not committed to the project. I'm committed to be a part of the project if it happens. I'm not officially Luke Cage yet, no.