Transforming into Drag Me to Hell's crazy gypsy woman

Lorna Raver, who plays the crazy old gypsy Mrs. Ganush in Sam Raimi's Drag Me to Hell, told reporters that having a cast made of her head was scarier than anything she saw in the film.

Raver's Mrs. Ganush puts a curse on Christine Brown, a loan officer played by Alison Lohman, after Brown denies her plea to save her house. As the movie wears on, Ganush gets scarier-looking, requiring increasingly elaborate makeup.

That required encasing the woman's head in plaster, which is used to cast latex versions of her head for special effects. "Since I'm a little claustrophobic, that was a difficult process for me," Raver said. "I mean, I was very nervous about it, but the KNB people treated me [well]. There were, like, five guys doing it all at once, and, I swear, one of them, his whole job was to pat me on the shoulder and say, 'It's all right, it's all right.' They were so sweet that we did it, got it off, and they said, 'Lorna, you did such a great job on that, it was wonderful. Would you do another one for us with a screaming expression?' Because they had been so sweet to me, I thought I can't turn them down. So we actually did two of them, but that's the thing that scares me. People ask me what scares me, and what scared me was having that life cast done."

In real life, Raver is a distinguished silver-haired lady. She is unrecognizable in the film as a decrepit old gypsy with bad teeth and faded eyes, and looks worse after fighting with Lohman in a car, getting staples in her face. The following Q&A features edited excerpts from Raver's interview. Drag Me to Hell opens Friday. (Possible spoilers ahead!)

What was your first reaction when you saw yourself in character?

Raver: It's kind of liberating to do a role like this, because you don't have to worry every day, "Is my hair all right, do I look OK?" So it's just kind of fun. I'm a character actor. I've been a journeyman character actor all my life, so I don't have a lot invested in whether I look gorgeous or not. At this stage in the game, who cares? It was just fun, and it was interesting. I love the people at KNB who developed the makeup, so I learned a lot about how all this kind of stuff is done. So it was great. 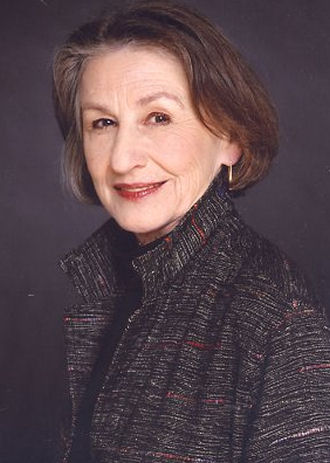 What was the makeup process?

Raver: Well, it was great, because I had two people who worked on me simultaneously. So it moved faster in that way. Clearly the amount of time varied a lot, because initially I just look kind of awful, but not a lot of prosthetics. As we go along and I got more and more horrible-looking or more of a fantasy in her mind and they start adding things, then it would take longer.

One of the most uncomfortable things was—I'm blinking my eye as I say it—the staple. The prosthetic piece that they built to be over the eye with the staple in [it], for some reason, was really not pleasant to have on. One of the first days I had it on, I got in the car, and I felt underneath it something get in my eye, and I thought, "Oh, no." Because if you take it off, then they have to rebuild and redo the whole thing. I thought, "We can't. We're just getting ready to shoot." So I got out of the car, I bent over, and I made myself tear. It was sufficient to wash it out under there so that I could go on, but I don't know what it is about that thing. That was uncomfortable. The contact lens, that was a piece of cake, but that patch, ugh.

How about the dentures?

Raver: The dentures weren't too bad. The longer one had them on, they got kind of uncomfortable, but in between takes I could pop them out and put them back in.

How did you come to Mrs. Ganush's voice?

Raver: That was just something that arose out of when I first started looking at the character. As a character person, I've done accents over the years, and so that was just kind of there. I hadn't really thought about that a whole lot. As far as the accent, she's Hungarian, and I wasn't able to find, before I did the initial read for Sam, a Hungarian accent tape. So I just kind of came up with my own thing, and after I got involved with the film, I met with a Hungarian woman. It turned out that I was almost right on the button. We had a couple of little adjustments, so somehow I had channeled it from somewhere, I guess. So it was just kind of there. It seemed right for the woman. I guess it was just kind of an intuitive thing.

Are you prepared to be a horror cult icon?

Raver: I don't know, because I don't know exactly what that's going to mean. I mean, it never occurred to me as a possibility, quite frankly, until in recent months. People [tell me], "Oh, you're going to be a horror icon. They're going to have masks at Halloween of you and stuff." I went to a screening at Universal with my agent. There were people in the audience. It wasn't people I knew. They were people from Universal, but I didn't know them. They came out, and my agent is saying to me, "Look, Lorna. They don't know who you are. They don't recognize you." I said, "Well, thank God. If people start recognizing me on the street for this film, I'm in deep trouble."