Zachary Quinto, who plays the key role of Spock in J.J. Abrams' Star Trek, told SCI FI Wire that the movie sets up the conditions for future adventures. (Spoilers ahead!)

"We spent a lot of time in this film introducing these characters and exploring the events that lead them to the convergence as the crew of the Enterprise," Quinto said in an exclusive interview last week in Beverly Hills, Calif. "So I imagine that in future films, or the next film or the next installment, we would probably settle into some sort of cohesion as a crew, as individuals and as a unit."

Quinto (TV's Heroes) added: "I'd be really interested to see what happens between Spock and Uhura [Zoe Saldana] and with Kirk [Chris Pine] and that sort of triangle. And, ... for me, one of the greatest things about this movie was the emotional immersion of my character. So I would love to see that manifest itself in a different way."

The film deals with the first meetings of the characters who will eventually make up the crew of the starship Enterprise. The film features glimpses at the childhoods of both Kirk and Spock, whose human mother, Amanda, is played by Winona Ryder and whose Vulcan father, Sarek, is played by Ben Cross.

"I would love to see Ben Cross involved with the next film," Quinto added. "I had a great time working with him. I think he brings a real austere depth to Sarek, and ... his work is really, really great."

In any case, Quinto said that he's eager to work again with Abrams, writers Roberto Orci and Alex Kurtzman and producer Bryan Burk. "I have such an implicit trust in Bob and Alex and Damon and J.J. and Bryan Burk that ... my job is to go where they take me, and, for now, that's the job I'm happy to do," he said.

By the end of the movie, Spock is "at the threshold of self-realization," Quinto said. "I think that where Leonard [Nimoy] plays the character in this movie is the absolute opposite end of the spectrum, which is that he's completely resolved and settled into the duality that exists within him. And my character certainly is not. You know, my version of the character is certainly not. But, I think, at the end of this movie, my character arrives at a point of conviction and understanding ... not only [of] himself but of other people that he doesn't have when he starts out in this film." 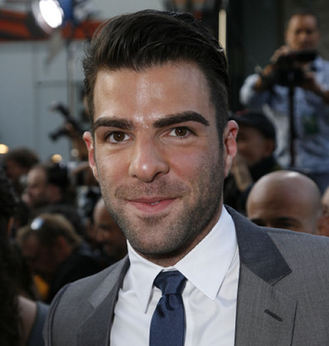 Following is an edited version of the rest of our exclusive interview with Quinto. Star Trek opens May 8.

Are there things that you did, that you shot, that didn't make it into the film?

Quinto: Most of my stuff is actually in the film, I have to say. There are other versions, there are longer versions, of scenes. Like, for example, the debate between Kirk and Spock when he gets called out for cheating on the test: That was a much longer sequence, and Chris and I both really loved that process, shooting that scene. So I was like, "Oh, well, that's really whittled away a little bit." But that's the great thing about J.J. is he's really willing to kill his darlings. He's not precious, and if something isn't moving the story forward, I mean, he's very story-driven, and it's because he has such a foundation of character and attention to the details of these characters that he's able to just really push the story forward, because the characters are already there. And I think that was an example of, we didn't need all the repetition of the scene, we didn't need everything we shot. But, you know, hopefully it'll end up on the DVD or something like that. ...

There's a few scenes that Winona had, a lot of work that ended up on the cutting-room floor unfortunately. ...

I really wanted to see more of that, actually.

If there are more Star Trek films, how are you going to balance that with Heroes?

Quinto: I don't know. I mean, we go back to Heroes, like, two weeks after I finish this press tour. So right now I'm just sort of, I'm engaging what's right in front of me, and I'll cross that bridge when I come to it. I mean, we worked it out last time. Ultimately, the arrangement we made ended up being rendered moot by the writers' strike, so it wasn't something that we had to concern ourselves with. But we'll see. ... I pay people to make those decisions and have those conversations. I don't have to, luckily.