Tag: Comics
Cullen Bunn and Andy MacDonald head to hell in sci-fi horror series, Rogue Planet
Tag: Science
Could drones launch satellites into space by cracking one giant whip?
Tag: Science
Boston Dynamics' robotic dog gets a job working an offshore oil rig
Tag: Science
What even is this freaky virus with DNA no one ever heard of?

Tron's Cindy Morgan talks: Why she's not in Legacy

Morgan, who now lives in Florida, talked with us on Wednesday and said it's a mystery to her. "Indirectly folks called casting, and indirectly they said, 'We love Cindy, but there really isn't a part for her on this film,'" Morgan told us in a telephone interview. "Who knows what the real story is? It's like a game of telephone. One person talks to another person that talks to another person." (Also check out our Cindy Morgan gallery, at the end of the story.)

Morgan is putting together a coffee-table book on her Hollywood experiences but has been following the development of Tron Legacy, which picks up the story 28 years after the 1982 original and centers on Sam Flynn (Garrett Hedlund), the son of Kevin Flynn (Bridges). (Possible spoilers ahead!)

Fans have been lobbying for Morgan to be in the movie, which has wrapped production: There are active campaigns online, such as "Yori Lives" on Facebook, which is independent of Morgan herself.

"All I know is what I'm seeing online," Morgan said. "I am so thrilled and touched and excited about the fan reaction and about people talking about the first one and how it relates to the second one. I can't tell you how warm a feeling I get from that. It just means so much."

Nobody from Tron Legacy contacted Morgan, and she did not directly speak with anyone from the Joe Kosinski-directed sequel. 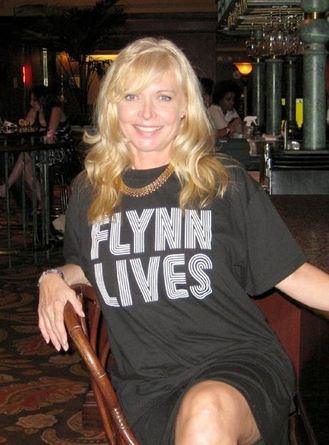 That's not for lack of trying. Morgan gave her contact information to the Disney team, who set up the Flynn's Arcade promotion at San Diego Comic-Con last year. When Disney built a mock-up of the arcade from Tron in San Diego's Gaslamp District, they did not even invite Morgan or offer her a pass to avoid the lines.

"The people I was with said, 'We'll just go in,'" Morgan said. "I said, 'Uh-uh. We're going to just quietly, unobtrusively stand in line, very quietly, walk in, say hello, take some pictures, and on the way out, I handed them my business card and said, 'Thank you very much.' I let them know who I was, and just scooted out. I had the best time. It was fun."

One of the excuses Morgan has heard for keeping Yori out of Legacy is that in Tron canon, Lora is dead. The Tron 2.0 video game reveals that Lora died in a digitization accident.

In Tron Legacy, Sam Flynn goes into the digital world, which has evolved since 1982, to find his father, Kevin. Boxleitner reprises his role as Alan Bradley. (Don't read the next paragraph if you want to avoid a big spoiler.)

The game is not necessarily canon, though, and death has never stopped anyone from returning for sequels. Morgan is happy to offer some story notes. "I've got all kinds of thoughts, and my phone does work, believe me," she said, not so subtly hinting that Disney should still call her. "It's a really funny position to be in. They killed Lora, they killed my character off, but I thought, 'Well, if I were a mother, and if I knew what could happen in the computer universe, I would have created a program in that computer to watch over my son.' This is science fiction, as you know, so anything is possible."

Tron Legacy has wrapped principal photography and is in post-production. Some of the fan campaigns suggest digitally inserting 1982 footage of Morgan to put her in the new film. Bridges appears in his 1982 form as the original Kevin Flynn, thanks to modern visual effects.

"I think anything's possible," Morgan said. "I really believe that. As far as I know, my phone still works. We'll see. We'll just see how it turns out. There's so much buzz about it, I'm getting all my information from the people who are really making the decisions now, and that's the fans. They make the choices. Isn't that cool? Isn't that the way it should be?"

The original Tron gang has mostly lost touch since the '80s. Morgan stayed on good terms with her co-stars and original director Steven Lisberger, but they don't hang out regularly. "I heard from Jeff before he did Against All Odds, and I wasn't able to make it to that screening. Bruce I see occasionally. We actually did a series, a short-lived series called Bring 'Em Back Alive, together. I see Bruce occasionally at a Tron event or a show. Steven Lisberger I really haven't seen. I saw him once in a restaurant, but that's it since Tron. So this is very, very interesting to me. I'm just kind of standing by and watching and smiling, enjoying what I'm seeing. I just think it's very cool."

Morgan's first book, From Catholic School to Caddyshack, recounts her life up to the 1980 comedy, featuring never-before-seen photos from the set. She is planning a second book, an autobiography of her Hollywood experiences, including Tron stories and her frustrations with Hollywood's behind-the-scenes shenanigans.

Morgan hopes Tron Legacy will please the passionate fans, whether she finds a way to appear in it or not. "Everything about that film needs to be true," she said. "Tron Legacy needs to be true to the original vision of Tron, and I think that's where a lot of the disappointment comes. If they're actually going to call it Legacy, the fans are sort of hoping that it does have a legacy."

For the latest sci-fi news, follow us on Twitter at @scifiwire
In Caddyshack
At Comic-Con's Flynn's Arcade
hide thumbnails show thumbnails