And you thought all the big finales were last week! The season finale march continues, with huge challenges ahead for Chuck and Sarah and their wedding on Chuck, Sheldon getting a new roomate on The Big Bang Theory and Sam's memory going to hell on Supernatural.

Also this week, it's the beginning of the end on The Event, Tesla's back with the queen of the vampires on Sanctuary, Morgan stirs up trouble in Camelot, the Doctor tries to help cloned humans on Doctor Who, Syfy's latest Saturday-night movie takes on Sinbad and the Minotaur, Family Guy's ninth season finale finishes its Star Wars trilogy, and Ned is reinstated as the Hand in Game of Thrones.

Here's what we have to look forward to this week on sci-fi, fantasy, paranormal and spy-fi TV, and non-sci-fi shows that have sci-fi content or guest stars.

Season-four finale! NBC managed a renewal for a fifth and final 13-episode season just in time for the big finale. It's finally time for the wedding—or is it? Vivian Volkoff (Lauren Cohan) strikes, and Chuck and the team must scramble if he and Sarah are going to live happily ever after. Timothy Dalton returns as Alexei Volkoff.

Here's a preview, a sneak peek AND an interview with stars Zachary Levi and Yvonne Strahovski:

With only one episode to go before next week's finale, all the characters finally start to come together. As Martinez returns to the White House determined to find the traitors who poisioned him, Sophia struggles with the guilt of her decision to wipe out the human race. Meanwhile, Sean and Vicky join Sterling and Simon in an effort to track down Sophia's headquarters.

While The Event has been canceled by NBC, word is that the series is being shopped elsewhere. Certainly the ratings are good enough for one of the cable channels. Let's hope so, especially since the show has gotten focused and given us some wonderful performances by Laura Innes as Sophia and some of the other stars. However, regardless of whether there's only one episode left in our future or another season elsewhere, let's hope the season comes to a close in some sort of a satisfying way.

When Magnus and Tesla investigate a Praxian lair, they discover secrets of the vampire race and the queen of the vampires. Meanwhile, Kate's dark past surfaces while she's digging into a drug operation that uses Abnormals.

Season-four finale! Raj moves in with Leonard, thanks to Leonard and Priya's Star Trek fantasy. Meanwhile, when Bernadette gets her Ph.D., Howard begins to feel inadequate.

The CW reruns last Friday's series finale. Michael Rosenbaum returns as Lex (finally!), and Clark takes the final step of his journey to becoming Superman. There are plenty of guest stars, including John Glover, Annette O'Toole and John Schneider.

On National Geographic's Naked Science (8 p.m.), theoretical physicists explore "Living in a Parallel Universe." And on the channel's Known Universe (9 p.m.), the show delves into the "Most Powerful Stars" in the Milky Way, and we're not talking Angelina Jolie.

A two-episode season-six finale! In "Let It Bleed," when a demon snatches Lisa and Ben, the Brothers Winchester find an unlikely ally in their efforts to rescue Dean's former family. And then, in "The Man Who Knew Too Much," everything comes to a head as Sam's fragile memory-blocking wall of his time in hell comes tumbling down. While Sam's memories coming back was pretty much a given, it's going to be interesting to see what happens with Castiel and the heaven of it all.

Regarding the finale, executive producer Sera Gamble has said you can expect a big cliffhanger that "opens up a new story area that's horrific — and cool." Luckily, Supernatural has been renewed for a seventh season by the CW.

Here's a preview and an interview with executive producer Sera Gamble:

Morgan uses black magic to hide her presence in Camelot so she can attempt to turn Arthur's men against him. Meanwhile, Igraine tries to figure out a way to leave Castle Pendragon.

In this spooky-looking new episode, the Doctor, Amy and Rory find themselves in a futuristic factory on Earth that uses cloned humans for dangerous work. I'm thinking the Doctor might have something to say about that.

Sinbad and the Minotaur (Syfy) 9 p.m.

On Syfy's Saturday night movie, Sinbad (Manu Bennett) tries to steal a relic from a sorcerer, and then he and his crew hunt for a treasure on an island with a minotaur.

On the Biography Channel's My Ghost Story (10 p.m.), a man considering suicide finds help thanks to a supernatural force, and a haunted old schoolhouse is visited by the ghosts of teachers and students.

Season finale! The Star Wars triology concludes! Luke (aka Chris) tries to save the life of Han Solo (aka Peter), who's being held by Jabba the Hutt (aka Joe). Rush Limbaugh voices Jabba's henchman Rancor. Other guest voices include Carrie Fisher, Anne Hathaway and H. Jon Benjamin. 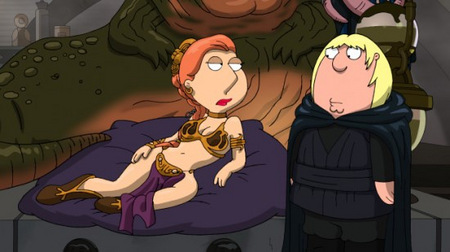 Ned gets back his job as the Hand and stands in for Robert, who's gone hunting. Meanwhile, Viserys wants his payment for Daenerys from Drogo.