TV THIS WEEK: Once Upon a Time, Merlin, marathons and more!

Tag: Merlin
Tag: Once Upon A Time
Tag: The Walking Dead

2013 arrives this week and brings with it the premiere of the final season of Merlin, new episodes of Once Upon a Time and American Horror Story: Asylum, and some worthy marathons to keep you warm on a cold New Year's Eve and Day.

Also this week, Sheldon gets accused of sexual harassment on The Big Bang Theory, Finch goes back to school on Person of Interest, Holmes offers Watson a job on Elementary and there's a new Star Wars: The Clone Wars.

The Governor and Woodbury, Michonne and her katana, taking the prison, the return of Merle, a couple of big goodbyes ... oh, yeah! Want to relive the exciting first half of the third season? Well, here's your chance. AMC is running all eight episodes of the third season straight through into New Year's Day. While we won't get episode nine until Feb. 10, at least we have some quality Walker kills and devastating deaths to ring in the new year.

Here's a preview of the season:

Syfy's New Year gift to us is two full days of Rod Serling's The Twilight Zone. So go on, revisit the fifth dimension. After two days of watching, you'll be shocked how many stars appeared in the series and how good many of the episodes were.

If you're still watching, you may be seeing stars and not just in the intro.

Dr. Thredson sets up a reunion for Kit. Meanwhile, Monsignor Howard takes on the Devil.

Sheldon gets in hot water with the Employee Relations Department after he's accused of sexual harassment. 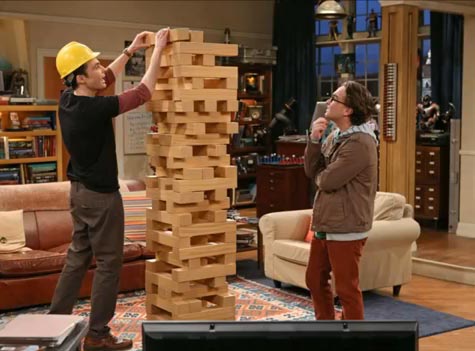 While Reese is in jail, Finch goes undercover as a high school substitute teacher who tries to protect a teenage genius. Meanwhile, Carter goes on a mission for the FBI.

With Watson's sober companion job over, Holmes figures out another way to keep her around. Meanwhile, the duo take on the case of a murder at a Manhattan luxury hotel when the general manager is found inside an industrial washing machine.

The premiere of the fifth and final season! Part one of two! Years have passed and Camelot is basking in a new Golden Age under King Arthur and Queen Guinevere. However, in the frozen north men are disappearing, leading Arthur and his knights to search for the missing men.

On the Travel Channel's Ghost Adventures (9 p.m.), Zak, Nick and Aaron revisit the most haunted homes and mansions they've investigated. And on the channel's The Dead Files (10 p.m.), Steve and Amy probe a Seattle restaurant where evidence of a past massacre is discovered.

The D-squad looks into the disappearance of the crew of a Jedi cruiser. This is the cartoon adventure's 100 episode. Happy birthday Clone Wars!

On the Cartoon Network's Green Lantern: The Animated Series (10 a.m.), Hal delves into the steampunk world in "Steam Lantern." And on the channel's Young Justice (10:30 a.m.), shocking secrets are discovered in "Before the Dawn."

Winter premiere! Once Upon a Time is back with all-new episodes. Now that Emma and Mary Margaret are back where they belong, you can bet Regina's life won't get any easier. In the opener, Regina is accused of murder when a much-admired citizen dies. Meanwhile, in the fairy-tale land, Snow and Charming plot against the Evil Queen.

Before we get to the stuff that will air, ABC has pulled the final four episodes of the canceled 666 Park Avenue. While the final episodes may be burned off during the summer, they may also be burned off online. ABC hasn't decided yet.

And on the Animal Planet's hit Finding Bigfoot (10 p.m.), the team travels to Washington state to investigate a local Bigfoot group's reports.