Here's a little Christmas present from Syfy! It's the network's 20th anniversary, so what better than a Syfy 20th Anniversary Special with a flock of Syfy stars to talk about the past, present and future of the channel? And there's a slew of midseason finales as Arrow, The Vampire Dairies and Beauty and the Beast sign off for the holidays.

Also this week, Dylan McDermott pays a visit to American Horror Story, a Chinese diplomat arrives to the island on Last Resort, Sheldon revisits Christmas memories over Dungeons & Dragons on The Big Bang Theory, the FBI get close to Reese on Person of Interest, Sherlock meets Watson's family on Elementary, Walter trips on LSD to gain an advantage against the Observers on Fringe, it's back to school for the gang on Haven, Shelley Long and George Wendt are Mr. and Mrs. Claws in The Merry In-Laws, zombies aren't the only problem on Syfy's Dead Season, a shrink falls for a Santa in The Real St. Nick, and a Christmas demon makes off with Steve on American Dad!.

Syfy's stars come out to celebrate 20 years of the Syfy Channel, with a look back and a peek ahead at what's to come. The stars chatting up Syfy include Josh Gates, Amanda Tapping, Michael Shanks, Jamie Bamber, Tricia Helfer, Colin Ferguson, Eddie McClintock, Katee Sackhoff and more.

Midseason finale! Arrow rings out the year with a Christmas-themed episode. Oliver decides to throw a family Christmas party at the Queen residence. Meanwhile, Laurel decides to spend Christmas with her father rather than Tommy, since the day was her late sister's birthday.

Dylan McDermott alert! Yes, he's back, and executive producer Ryan Murphy has confirmed that McDermott's role this season is an important one. While I won't spill it here, let's just say that fans are not going to want to miss this episode. Beyond the Dylan McDermott of it all, Lana discovers evidence that clears Kit.

On ABC's The Neighbors (8:30 p.m.), the aliens learn about death when the Hidden Hills' longtime gardener dies, but Larry has trouble accepting the concept in "Juan of the Dead." The Science Channel's Dark Matters: Twisted But True (9 p.m.) delves into Pavlovian experiments performed on orphans, red rain that fell in India, and a glow-in-the-dark paint from World War I that had a deadly ingredient.

Kendal and King go on a rescue mission. Meanwhile, a Chinese diplomat arrives to offer a deal to Chaplin.

A game of Dungeons & Dragons brings up some Christmas memories for Sheldon. Meanwhile, Raj joins Penny, Bernadette and Amy for their ladies' night.

Midseason finale! It's party time again in Mystic Falls, leading to preparations for a winter-themed celebration. Meanwhile, Tyler and the hybrids plot to take out Klaus, which doesn't sit well with Stefan and Caroline. Elsewhere, Elena and Damon head to the lake house to help Jeremy deal with his problematic desire to kill all vampires.

Midseason finale! Cat asks Vincent to be her date for her father's wedding. Meanwhile, Tess and Joe get romantic.

The FBI close in on Reese. Meanwhile, Finch and Reese's latest person of interest is the sister of a soldier who was killed in action.

Walter attempts to jog his memory with LSD ... again, but this time to cook up a plan to beat the Observers. Elsewhere, Peter and Olivia track a strange signal into the forest and find something shocking.

When people are transformed into their high-school selves and then murdered, it leads to a Haven High School reunion and some long-buried resentments.

On Bio's My Ghost Story: Caught on Camera (9 p.m.), a ghost asks investigators for help. On the channel's Haunted Encounters: Face to Face (10 p.m.), Eastern State Penitentiary in Philadelphia is investigated. On the Travel Channel's Ghost Adventures (9 p.m.), the team delves into paranormal activity at various hospitals, sanitariums and asylums in "Clinically Dead." And on the channel's The Dead Files (10 p.m.), Steve and Amy travel to Columbus, Ohio, to investigate a bar that has reports that an evil entity attacked the owner's wife and is terrifying the staff.

Shelley Long and George Wendt star as the parents of a man whose fiancee discovers that her future in-laws are actually Mr. and Mrs. Santa Claus. This movie also stars Lucas Bryant and Kassia Warshawski.

In this Syfy Saturday night movie, the survivors of a zombie apocalypse, Elvis and Tweeter, believe they just might have found a safe harbor on a tropical island, until they meet the locals.

In this Lifetime movie, a pretty psychiatrist finds herself falling for a cute guy who believes he's the real Santa Claus.

There's a new Celebrity Ghost Stories (9 p.m.) on the Bio channel. On the channel's The Haunting Of ... (10 p.m.), Michael Rapaport and a friend head back to Erasmus High School, where they were haunted by dead students. And Harry Potter, aka Daniel Radcliffe, pops up on BBC America's The Graham Norton Show (10 p.m.).

When Steve gets bratty, Stan takes him to visit Grandpa Jack, who tells him about the legend of a Christmas demon (Danny Glover) who punishes naughty children. However, when the actual creature nabs Steve, it's Stan and Roger to the rescue. 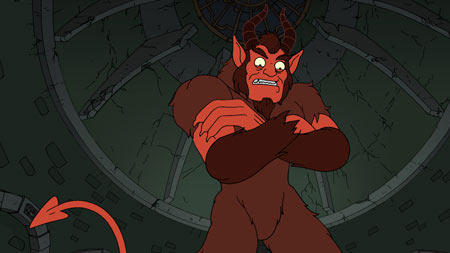 On the Animal Planet's Finding Bigfoot (10 p.m.), a message on the hotline leads to a night investigation in the Michigan woods.