TV THIS WEEK: Sanctuary's back, American Horror Story and more!

The weirdest show of the season, American Horror Story, premieres this week, along with Sanctuary's fourth season. And the last of the summer shows, Warehouse 13, signs off with a two-hour finale which brings back H.G.Wells.

Also this week, there's a Pterosaur attack and probably more teen angst on Terra Nova, Castle takes on frozen severed heads, Jason's daughter joins TAPS on Ghost Hunters, Klaus continues to plot on The Vampire Diaries, Cassie messes with stuff she shouldn't mess with on The Secret Circle, Reese kicks more butt on Person of Interest, Jewel Staite pops up on Supernatural, Peter's still haunting Walter on Fringe, a new tenant has a dark secret on Bedlam and evil roots are unleashed on the world in Syfy's The Terror Beneath.

When Pterosaurs attack, Jim and Taylor struggle to find a way to protect the colony. Meanwhile, Elisabeth suspects someone she had romantic feelings for was involved in her being recruited to Terra Nova.

Here's a preview of the season and a sneak peek:

Two-hour season-three finale! Pete, Myka, Artie and Claudia race to stop the murderous Walter Sykes (Anthony Michael Hall) to save the Warehouse and the world. Meanwhile, Sykes' final revenge involves recruiting H.G. Wells (Jaime Murray). Warehouse 13 has been picked up for a fourth season, which will likely premiere next summer.

On TCM's A Night at the Movies: The Horrors of Stephen King (8 p.m.), King explores horror films and the movies that scare him. On MTV's Death Valley (10:30 p.m.) Stubeck and Billy discover a new way to take out zombies.

Jason's daughter joins TAPS as they investigate a hotel and a historic fort.

Series premiere! The freakiest series since Twin Peaks follows a therapist and his family as they move across country to start over, only to move into a home that has issues of its own. From Glee co-creators Ryan Murphy and Brad Falchuk, the series stars Dylan McDermott, Connie Britton, Denis O'Hare, and Jessica Lange.

History's Ancient Aliens (9 p.m.) delves into "Aliens and the Founding Fathers." On the Science Channel's Dark Matters: Twisted But True (10 p.m.), it's more mad science with "Radio Waves of Death; How to Make a Zombie; Jekyll vs. Hyde." And on Syfy's Paranormal Witness (10 p.m.), a board game unleashes trouble for a family in "The Dangerous Game/Trumbull County UFO."

Klaus connects with a witch he once knew in an effort to figure out why his plan isn't working. Meanwhile, Damon's new foe frustrates him and Caroline offers to help Elena deal with her feelings.

Cassie tracks down a woman from her mother's circle and enlists Faye in conjuring a spell. However, Faye's help comes with a price.

When the machine spits out the number of a former Marine, Reese goes undercover to get closer to him.

On CBS's The Big Bang Theory (8 p.m.), Penny introduces Raj to a woman he can talk to without alcohol.

The droids are in trouble again!

Michael contemplates the inconvenience of being haunted by his ex-wife while he interviews for a new clinic director. Meanwhile, when a man passes out and refuses medical help, Michael eventually finds lesions on his brain that require emergency surgery.

Jewel Staite alert! Fan boy fav, Jewel Staite, guest stars as a childhood friend of Sam's named Amy, in this episode which was directed by star Jensen Ackles (aka Dean). No doubt, "The Girl Next Door," will pick up from last week's cliffhanger, which had Sam and Dean headed to a hospital, which was under the control of a bunch of nasty new bad guys. Colin Ford returns to guest star as young Sam. As far as what happened to Castiel last week, sound off below with your thoughts.

No one quite kills people like Fringe. When two 12-year-olds are discovered in an advanced state of decomp a few hours after they bullied a boy, the Fringe team investigates. Meanwhile, Walter's hallucinations become a problem.

Season-four premiere! With Helen in the past trying to stop Adam and an army of Abnormals from Hollow Earth about to invade the surface, it looks like the Sanctuary team will have their hands full when the series premieres.

On the Cartoon Network, Batman: The Brave and the Bold (6 p.m.), Batman, Superman and Wonder Woman join forces to take on Joker, Lex Luthor and Cheetah. And there's new episodes of Young Justice (6:30 p.m.), Generator Rex (7 p.m.) and Ben 10: Ultimate Alien (7:30 p.m.). On the CW's Nikita (8 p.m.), Birkoff gives information to Nikita and Michael about a former terrorist who works for Division in "Knightfall." On Disney's Wizards of Waverly Place (8 p.m.), Alex and Harper find themselves living in an apartment building that has a secret floor for wizards in "Wizards of Apartment 13B." On the Travel Channel's Ghost Adventures (9 p.m.), the teams delves into reports of ghosts at the "Old Town San Diego." And on the channel's The Dead Files (10 p.m.), the investigators probe the haunting of a California family that claims to be plagued by spirits for generations in "Terror in the Shadows - Acampo, CA."

Bedlam Heights resident Leah is haunted by a series of unexplained experiences, and Kate learns she's got a dark secret.

A Syfy Original Movie! Heroes' Adrian Pasdar stars in this flick with the slogan, "They thought they found the Garden of Eden, but they unleashed the root of all evil." You got to love it. In the film, Pasdar plays a government agent trying to stop a monstrous root system that's unleashing ecological disasters on the world.

In this competition series, several teams are challenged to create a twisted version of a fairy tale. And an hour earlier at 8 p.m. you can catch the channel's Food Network Challenge, which takes on "Extreme Alien Cakes."

Here's a picture of Halloween Wars: 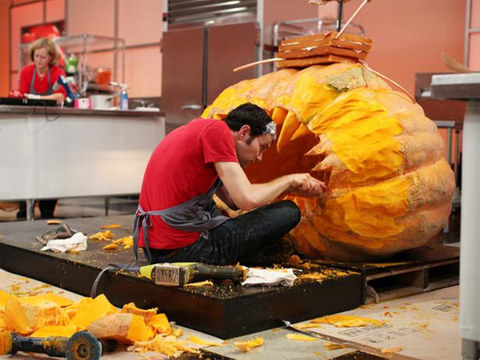 On the Travel Channel's Making Monsters (8 p.m.), the crew creates stage props for Alice Cooper, while Ed and Marsha go to Monsterpalooza. And there's a new episode of TLC's Long Island Medium (10 p.m.).