TV THIS WEEK: Bolivia's snatched on Fringe, Being Human and more!

There are some promising originals to look forward to with Fringe, which heads back Over There as Bolivia (aka Fauxlivia) finds herself in big trouble, and with BBC America's Being Human, which explores werewolf cage matches. Meanwhile, No Ordinary Family begins to fade away, with two of its final three episodes of the season airing this week.

Also, there's a who-done-it on Chuck, Thomas gets a reply to his message on The Event, vampire elders arrive to stir up trouble on Syfy's Being Human, Greer and Wray must join forces on Stargate Universe, a ghost-hunting dog joins the TAPS team on Ghost Hunters, Archer goes after Irish gangsters, Uther's life's in danger AGAIN on Merlin, and Syfy's original movie, Scream of the Banshee, has Lauren Holly battling the title character.

Ranking the sexiest werewolves on television
BBC cancels Being Human, star calls it 'victim of its own success'

Chuck's on the hunt for more Chucks, until someone starts murdering them in Castle. Meanwhile, Awesome is on a mission to save Ellie from her new hobby of trying to figure out the mysteries held within her dad's computer, and the Buy More gang takes on the Large Mart crew.

Thomas gets an answer to his message and shares it with Sophia. Meanwhile, President Martinez grills Jarvis regarding his betrayal and Sean uses blackmail to force Vicky to help him.

The arrival of four coffins belonging to vampire elders causes problems, and Josh is kidnapped and told he's going to be forced to fight another werewolf in a cage match. Meanwhile, we'll get some Bishop flashbacks from 1955, when he had a relationship with a human woman.

In other Being Human news, Syfy's ordered a second season of the series.

Here's a preview of this week's episode:

While Rush's data is being analyzed by Sen. Michaels and Dr. Andrew Covel, Greer and Wray end up at Homeworld Command and struggle to survive an attack by an alien ship.

Mrs. X (Lucy Lawless) tries to eliminate the Powells with the help of a supervillain with animal-like powers. Elsewhere, Daphne and Chris skip school so they can go to a Sara Bareilles video shoot, and Katie discovers more shocking news about Joshua.

ABC has moved Family's penultimate episode, "No Ordinary Future," which was originally scheduled to air next week, to this Saturday, March 26, at 10 p.m. The episode trades places with a special, Dancing With the Stars: The Story So Far.

Here's a preview of Tuesday's episode:

Team Truth heads to Tuesdays. It's off to Panama on the hunt for ghosts at a haunted island prison, and then it's a trip to Argentina to seek out the mysterious Ucumar beast.

The TAPS team is joined by Maddie, a ghost-hunting dog, as they investigate reports of a ghostly suicidal bride in the Hotel Alex Johnson in Rapid City, S.D.

Here's a promo and a Maddie sneak peek:

On the season-two premiere of Syfy's Fact or Faked: Paranormal Files (10 p.m.), the team looks into a reported battle over Los Angeles that may have happened just after the 1941 attack on Pearl Harbor, and then they investigate a haunting on the Queen Mary cruise ship. And on SOAPnet's Being Erica (11 p.m.), time traveler Erica finds herself in a bind in "Gettin' Wiggy Wit' It."

It's one cranky Archer when he learns the chemotherapy drugs he's been taking are fake, which leads him go after the Irish gangsters responsible. Meanwhile, he befriends a marijuana-smoking cancer patient (voiced by Joan Van Ark). Glee's Darren Criss guest-voices Mikey and Tommy.

On National Geographic's Storm Worlds (8 p.m.), it's a look at what might happen if Earth were struck by extreme extraterrestrial storms.

It's an Over There episode in the altverse that has the Fringe team searching for a pregnant Fauxlivia after she goes missing. The other thing that's going to go missing is this outstanding series if it doesn't get some viewers soon!

When a young man named Gilli (Harry Melling), who is small in stature, begins to advance through Camelot's annual tournament, Merlin discovers magic is at work. However, the stakes get raised when Gilli is slated to face Uther.

George returns home when he discovers his father has died. Meanwhile, Annie decides to investigate the Box Tunnel 20 murderers, and Herrick goes through withdrawal from blood.

Lauren Holly and Lance Henriksen star in this Syfy original movie about what happens when archaeology professor Isla Whelan (Holly) and her students discover an antique box, which of course is just begging to be opened. Needless to say, they unleash one nasty banshee who has a taste for academic blood.

Special day and time! In the show's penultimate episode, after a trip to the future, Stephanie realizes it's up to her to prevent the downfall of her family when their powers are exposed to the world. Meanwhile, Jim and George investigate the death of a cop, and Mrs. X (Lucy Lawless) assigns an unlikely person to keep an eye on Katie.

Needless to say, if ABC had any faith left in the series, they would never bury an original episode on a Saturday. And the worst of it is that the decision was just made, so many regular viewers will miss it. At this point ABC still has the season finale, "No Ordinary Beginning," slated for Tuesday, April 5, at 8 p.m. ET/PT, but I wouldn't count on that happening. What we can count on is cancellation. 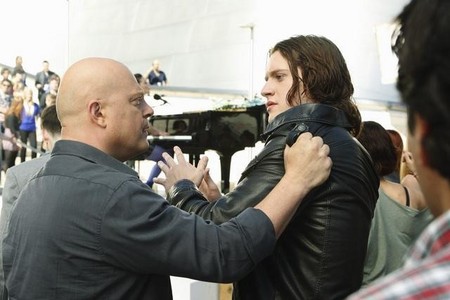