TV THIS WEEK: Camelot and Doctor Who finales, Sanctuary and more!

A couple of the spring shows bid farewell as Camelot ends its first season and Doctor Who offers up an exciting midseason finale involving the women in the Time Lord's life. Meanwhile, Game of Thrones and Sanctuary near the ends of their seasons.

Also—Teen Wolf finishes up its two-part premiere, there's some hot spy girl action with the return of Covert Affairs, Joe finds a Back to the Future collectible on Hollywood Treasure, Battlestar Galactica returns via BBC America, and there's a couple silly-looking movies, including Disney's My Babysitter Is a Vampire and Syfy's Ice Road Terror.

Magnus and her team investigate the disappearance of a colleague, and she goes up against a military blockade in an effort to find answers. So how are you feeling about Sanctuary Mondays?

Part two of the two-part series premiere! Life is tough for Scott McCall, a teen who just found out he is a werewolf and has to deal with school, performing on the lacrosse team AND trying to get a second date with the girl of his dreams ... who just happens to be the daughter of a werewolf hunter.

Here's an interview with Tyler Hoechlin, about his werewolf character Derek:

Here's a recap of the third season of True Blood, with cast interviews to whet your appetite for season four, which premieres on Sunday, June 26.

If you caught USA's Covert Affairs (10 p.m.) last season, you might want to check out the season-two premiere of the spy show that has less mythology than The CW's Nikita, but just as much ass-kicking. In the premiere, Ben vanishes again, but let's hope Annie can get past him this season.

The team heads to California to help a mother who's experiencing paranormal phenomena in her home, and then they pay a visit to a hunter and his girlfriend who are hearing unexplained noises and dealing with other disturbing events.

Joe visits a collector regarding a Back to the Future II prop, and in the second episode he tries to get items for his auction from Miracle on 34th Street, A Christmas Story and Elf.

A look at NASA's tool lab and how equipment is created for use in space, and a look at the ultimate robot handyman, Robonaut. Also, scientists discuss the possibility of building a skyscraper on the moon. 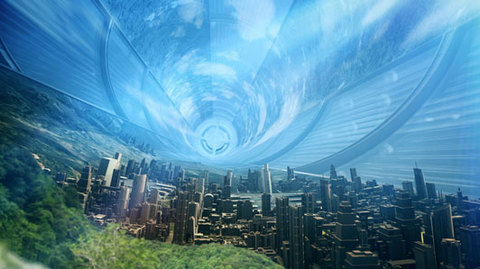 My Babysitter's a Vampire (Disney) 7 p.m.

In this TV movie, Ethan Mason (Matthew Knight) is a 13-year-old who discovers his beautiful babysitter is actually a vampire.

Season one finale! Arthur struggles to defend Bardon Pass, while Morgan continues her efforts to steal the throne away from him while he's gone. And Starz is promising a special preview of Torchwood: Miracle Day, which premieres on the pay channel on July 8.

On the Travel Channel's Ghost Adventures (9 p.m.), the crew visits Loretta Lynn's plantation in Hurricane Mills, Tenn., to investigate reports that spirits from the Civil War still roam there.

Midseason finale! After last Saturday's big shocker, the search is on for the Doctor to get back someone important to him as he tries to raise an army by calling in favors from across the cosmos. Meanwhile, the Doctor finally discovers who River Song really is.

A Syfy Original Movie! When an Alaskan diamond mining operation wakes up a prehistoric creature, it becomes more than a little cranky and hungry. Luckily, two truckers take on the job of trying to stop it before it can hit a populated area. The flick stars Battlestar Galactica's Michael Hogan and Ty Olsson, and Blood Ties' Dylan Neal.

Feeling nostalgic for the good old days? Well, BBC America is rerunning Battlestar Galactica from the start on Saturday nights, beginning with part one of the miniseries at 10 p.m. And on Biography Channel's My Ghost Story (10 p.m.), stories of hauntings include a home where a baby was scalded to death and the ghost of a Catholic bishop.