TV THIS WEEK: Chuck and Fringe are back, and The Event begins

It's the start of the official fall TV season, with most new shows and returning series premiering this week. That means you'll see the kickoff for new seasons of Chuck, Fringe, Smallville, Supernatural and Medium, along with the premieres of the new shows, The Event and Undercovers.

This week, Chuck hunts for his mom on Chuck, Sean freaks out when his girlfriend goes missing on The Event, Myka and Pete are on the trail of H.G. in the season finale of Warehouse 13, the supernatural world gets bigger on The Vampire Diaries, there are two Olivias on Fringe, Clark survives on Smallville, Dean has a decision to make on Supernatural, Audrey has some explaining to do on Haven and there's a big, nasty Sharktopus on the loose on Saturday nights.

Here's what we have to look forward to this week on sci-fi, fantasy, paranormal and spy-fi TV, along with non-sci-fi shows that involve sci-fi or fantasy storylines or stars.

Season-four premiere! Yea! Chuck's back, and this season it's all about mom. Linda Hamilton stars in a recurring role as Chuck and Ellie's mom, and, yes, we'll meet her in this episode. In "Chuck vs. the Anniversary," Chuck is using his skills to find his mom while keeping the mission a secret from his sister, Ellie. Meanwhile, Sarah and Casey head to Russia to investigate a mysterious organization, and Ellie has big news for her family. Dolph Lundgren, Olivia Munn and Harry Dean Stanton also guest-star.

Here's a season-four preview with Linda Hamilton as Chuck's kick-ass mom, along with a Buy More sneak peek:

New series! The new series promises to be a mix of 24 and Lost that's part love story, part conspiracy thriller and part sci-fi. In the pilot, an ordinary man named Sean Walker (Jason Ritter) struggles to find out what happened to his missing girlfriend (Sarah Roemer) and stumbles into a conspiracy to keep an upcoming global event secret from the public. It all involves releasing detainees from a secret military base, the attempted assassination of the president of the United States (Blair Underwood), along with the detainee's leader (Laura Innes), and one missing girlfriend.

The scream-queen wannabes hold a séance and get possessed as they try to grab that ultimate role in Saw 3D.

And other Monday shows of interest

Season-two finale! In part two of the two-part season finale, with the fate of the world at stake the gang tries to find H.G. and a dangerous artifact in "Reset." Meanwhile, Pete's feelings for Kelly are explored, and Claudia talks to Artie about her future with the Warehouse.

On Cartoon Network's Unnatural History (8 p.m.) season finale, Henry works to decipher clues left by George Washington, while Maggie and Jasper try to get elected for school office in "Past Presidents and Future." And on Discovery's The Colony (10 p.m.), while trying to survive after a viral apocalypse on this reality series, the colonists sent out scouts to find supplies. Meanwhile, the colony is attacked.

The TAPS team head to Cooperstown, N.Y., to investigate the National Baseball Hall of Fame, and they look into claims of voices and doors that slam shut by themselves at Rose Island off of Newport, R.I., in "Signals From the Past."

The Science Channel's Sci Fi Science (10 p.m.) takes a look at how we might react if a hostile alien race invaded the Earth.

It looks like Katherine's not the only problem the teens of Mystic Falls have. In "Bad Moon Rising," Elena, Damon and Alaric go to Duke University to look into Isobel's past and her paranormal studies. Meanwhile, Stefan and Caroline find something in the woods even a vampire should be scared of, and Tyler discovers a secret about his Uncle Mason.

Season-three premiere! With Olivia trapped in the alternate universe, Bolivia (or Bad Olivia) takes her place along side Walter and Peter. Producers have said that episodes will primarily take place in one universe or the other, with the opening credits being blue for "Over Here" and red for "Over There."

Team Truth heads to investigate a deserted Japanese mining town for a little ghost action, and then it's off to Tanzania to find a predator known as the Mngwa.

The Beast Legends crew take on the legend of the Dakuwaqa, or the shark god, in Fiji.

On The CW's Nikita (8 p.m.), Nikita is injured while trying to save a journalist, and Percy and Michael suspect Birkhoff of being Nikita's mole in "Kill Jill." And on the History Channel's The Universe (8 p.m.), the "Dark Future of the Sun" is examined, along with its effect on the Earth. Then, on Stan Lee's Superhumans (10 p.m.), the "Rubber Band Man," aka Garry Turner, is profiled, along with snake handler Tim Friede and sword swallower Dan Meyer.

Season-seven premiere! It's Freaky Friday for Allison and Bridgette when they both dream about a homeless man and end up switching bodies in "Bring Your Daughter to Work Day." 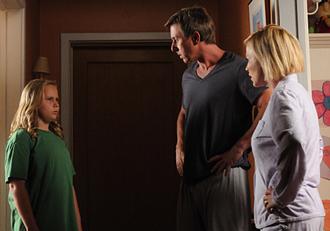 Season-ten premiere! Well, it's not a surprise that Clark will survive last season's cliffhanger. The 10th and final season opens with "Lazarus," which features Chloe trying to find Oliver, while Tess ends up in a LuthorCorp lab. Meanwhile, Jonathan Kent returns with a message for Clark.

Season-six premiere! After saving the world from Armageddon, Dean has settled down to try and live a normal life. Too bad Sam's out of hell and ready to hit the monster-hunting road again in "Exile on Main Street." Along the way the brothers meet their grandfather, Samuel, played by X-Files' Mitch Pileggi.

With Ryloth under siege, Di attempts to rally the locals in "Supply Lines." Meanwhile, the king of Toydaria considers sending aid to Ryloth. And yes, Jar Jar Binks looks to be in on the action.

Here's a "Supply Lines" teaser and a preview of the new season:

Agent Howard arrives in Haven to grill Audrey about her strange behavior since she's taken her break from the FBI. However, when two of Haven's criminals hijack Duke's boat with Howard and Audrey aboard, Howard just may learn a thing or two about the Troubles in "The Trial of Audrey Parker."

And other Friday shows of interest

On The Cartoon Network's Batman: The Brave and the Bold (7 p.m.), The Faceless Hunter plans to destroy the Earth via a massive beast made of smaller Starros in "The Siege of Starro!" On the Travel Channel's Most Terrifying Places in America: Volume 3 (8 p.m.), paranormal hot spots are explored. And on the Travel Channel's Ghost Adventures (9 p.m.), the ghost hunt is on at the "Rolling Hills Sanitarium---Bethany, NY."

A Syfy Saturday Night Original! It's half shark, half octopus and all killing machine! Eric Roberts stars as a scientist working with his scientist daughter on a shark-octopus hybrid for the military. What could possibly go wrong?

And other Saturday shows of interest

On the Travel Channel's Ghost Stories (10 p.m.), it's a look at reports of an angry ghost that's taken up residence in the Moon River Brewing Co. in Savannah, Ga.

Season 9 premiere! Most of Quahog has been invited by the newly born-again James Woods (voice of James Woods) to his mansion to meet his new companion (voice of Ashley Tisdale) ... and it's murder in this takeoff on Agatha Christie's And Then There Were None.

Here's a preview of the finale:

Season-five premiere! Oh, the tragedy! With The Gates and True Blood done with their summer runs, there's just not a lot to look forward to on Sundays. However, while it's not sci-fi, there's more than enough horror to go around with the premiere of Dexter. In "My Bad," Dexter deals with Rita's murder and being a father. What's a serial killer to do?