TV THIS WEEK: Doctor Who hits America! Game of Thrones! And more!

Doctor Who's back, and he's headed to America for a big adventure, plus we'll get another episode of Game of Thrones and find out whether it can live up to its premiere. And the funny Archer heads off into the sunset with its second-season finale.

Also this week, Chuck and Sarah get swindled on Chuck, Sophia hunts for a super weapon on The Event, the Destiny crew discover people who may be their descendants on Stargate Universe, Destination Truth goes to Antarctica for its fourth-season finale, Tango does a magic trick on Ghost Hunters, we get a look at the real Klaus on The Vampire Diaries, there's a new superhero in town on Smallville, Sam and Dean time-travel to the wild, wild west on Supernatural, we'll trip Over Here and Over There on Fringe, Bigfoot goes missing on Sanctary, and a bunch of friends end up as Roadkill on Syfy.

Amber Nash talks the power of Pam cosplayers and the return of Archer
Simon Pegg, Jamie Lee Curtis, and a release date all revealed for Archer Season 11

When Chuck and Sarah are swindled out of their wedding money, they turn to the best con artist Sarah knows—her father (Gary Cole). Meanwhile, Morgan and Alex decide it's time for Casey to tell Alex's mother he's alive. Awkward!

Sean finally tracks down James Dempsey. Elsewhere, Vice President Jarvis meets with an adversary, and Sophia continues her hunt for a super weapon.

The crew of the Destiny has to deal with attacking drones that threaten the ship and mystery involving a planet with people who claim to be their descendants.

On A&E's Paranormal State (10 & 10:30 p.m.), the team arrives to help a family that's being haunted in "Permission to Do Harm," and then it's on to the case of a woman who's being attacked by a spirit that's leaving scratch marks on her back in "Devil's Hostage."

Season-four finale! Team Truth heads to Antarctica for a chilly ghost hunt on their most remote investigation ever.

Here's a look and a sneak peek:

The TAPS crew investigate one of the oldest opera houses in Connecticut, and Tango does a magic trick.

On Syfy's Fact or Faked: Paranormal Files (10 p.m.), the team looks into footage of what might be a chupacabra in Texas, and an alien may have been caught walking behind a news reporter in Argentina in "Dashcam Chupacabra/Nightly News Alien." And on SOAPnet's third-season finale of Being Erica (11 p.m.), the time-traveling Erica unexpectedly returns after three years of Dr. Tom's therapy in "Erica, Interrupted." Could she be cured?

Well, we'll certainly see the fallout of Elena's actions last week. This episode takes us back to 1491 to find out the origin of the moonstone curse when Katherine first met Klaus. Joseph Morgan guest-stars as Klaus.

On the CW's Nikita (9 p.m.), just as Nikita is ready to implement a plan to get Alex out of Division, Alex is sent on a mission to stop a foreign president's son from distributing a nerve toxin in "Girl's Best Friend."

While Lois tries to give Clark tips on separating himself from the Blur, there's a new superhero in town who seems to be stealing the Blur's thunder. From the DC comic books, Booster Gold (Eric Martsolf) and the Blue Beetle (Jaden Brandt Bartlett) appear for the first time on Smallville.

Dean hatches a plan to get Samuel Colt (the guy who made the magical Colt gun that kills supernatural baddies) to help him and Sam in their battle against Eve. There's only one catch. He and Sam have to travel back in time to the wild, wild west to find him. Sam Hennings guest-stars as Samuel Colt.

We'll get a trip to both universes as Walternate puts a plan in motion that will affect the Over Here universe. Oh, it's getting good.

Magnus arrives from a conference to find the Sanctuary in disarray and a disheveled Henry who's lost two days. With Bigfoot missing and a U.N. security team headed their way for an inspection, the good doctor has to get down to the bottom of what happened.

In case you missed them, here are the season-five highlights, to get you ready for the season-six premiere. 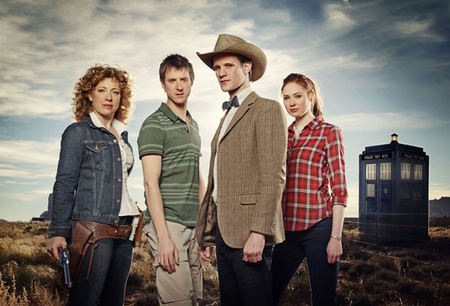 Season-six premieres! Doctor Who's back! Yay! In the first part of the two-part premiere, the Doctor, Amy and Rory hit America for an adventure that takes them to the Utah desert and the Oval Office in 1969.

In this Syfy film, a group of friends traveling across Ireland accidentally cause the death of an old gypsy woman, and they get cursed with a violent death via a flying beast. Don't you just hate when that happens? The flick stars Stephen Rea and Eliza Bennett.

You've got to admit, this series had an awesome start. In the second episode, Ned heads south with his daughters with plans to take his place in the King's court. Elsewhere, Catelyn stays home, hoping that Bran will recover. Meanwhile, Daenerys tries to figure out how to please her new husband and gets some advice on the subject, and Jon Snow goes north in an attempt to join the Night Watch.