The Doctor is back and on the hunt for Amy and Rory's baby on Doctor Who, Firefly's Summer Glau digs into Alphas, and Torchwood: Miracle Day heats up as Jack (and we) finally get some answers.

Also this week, Allison and Carter face a relationship audit on Eureka, Myka goes after the man who killed her former partner on Warehouse 13, TAPS takes an urgent case on Ghost Hunters, Fry gives the future a cold on Futurama, Ryan meets someone else who can see Wilfred on Wilfred, things get spooky for Audrey and gang on Haven, a mountain monster eats rescuers on Syfy's Killer Mountain, and it's war for the vamps and the witches on True Blood.

Here's what we have to look forward to this week on sci-fi, fantasy, paranormal and spy-fi TV, and non-sci-fi shows featuring sci-fi or fantasy storylines.

Romance is in the air when the Department of Defense sends an auditor to take stock of Allison and Carter's relationship. Meanwhile, Jo explores ideas for Henry and Grace's wedding, and Tiny visits Eureka.

Myka goes on the hunt for the man who murdered her former partner.

Summer Glau alert! Firefly's Glau pops up as a powerful new Alpha the team is trying to locate before her inventions fall into the wrong hands. We're guessing that means Red Flag.

TNT's hit cop show Rizzoli & Isles (10 p.m.) explores the world of witchcraft, when Jane and the gang investigate the case of what might just be a modern-day witch hunt in Salem in "Bloodlines."

Returns with new episodes! The TAPS crew returns and takes on a Rhode Island family's urgent call for help. The family reports that their house is being haunted by an old man in the kitchen and a black cat in the living room.

When Fry sneezes, he accidentally introduces the common cold to the future. 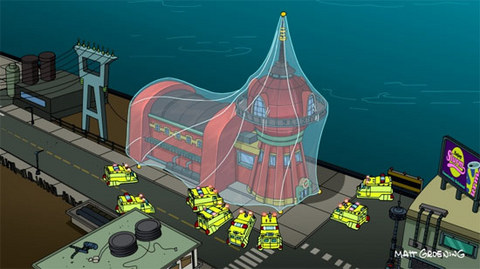 Ryan meets someone else who says they can see Wilfred as he does, and he begins to suspect his friendship with the dog/man might not be in his best interest. Dwight Yoakam guest-stars.

On the History Channel's Secret Access: UFOs on the Record (8 p.m.), evidence of UFO sightings is explored. And there's more aliens on the channel's Ancient Aliens (10 p.m.), with a look at "Aliens and Mysterious Rituals." On USA's Burn Notice (9 p.m.), Michael and Jesse end up in hot water when a security job goes bad in "Army of One." And on Comedy Central, on Ugly Americans (10:30 p.m.) Callie admits to Mark that she's been unfaithful, so Mark decides to put their new open relationship to the test when his college girlfriend re-enters his life in "Lilly and the Beast."

So, could Miracle Day really be all about Jack and one of his past relationships? It looks like we'll find out in this episode, when Jack faces a man he believed was dead while Rex goes into action mode in a last-ditch attempt to stop the collapse of the human race.

A drowning case leads Nathan and Audrey to a secretive family compound on the edge of Haven, where children are disappearing.

Here's a promo and a creepy sneak peek:

On Disney's Wizards of Waverly Place (8 p.m.), when Justin gets barred from a family wizard competition, he tries to get back in on "Justin's Back In." On the Cartoon Network's ThurderCats (8:30 p.m.), the team searches for the Book of Omens in "Journey to the Tower of Omens." On BBC America's Doctor Who Confidential (9 p.m.), the cast and crew of the newest Doctor Who chat about the show in this 15-minute special. And on the Travel Channel's Paranormal Challenge (9 p.m.), two teams of amateur ghost hunters compete to find the most paranormal evidence at the abandoned Linda Vista Hospital in Los Angeles.

The Doctor is back! On part two of "A Good Man Goes To War," during the Doctor's "desperate search for Melody Pond, the TARDIS crash lands in 1930s Berlin, bringing the Doctor face-to-face with the greatest war criminal in the Universe. And Hitler." Awesome!

Yet another Doctor Who special! This week's special offers a salute to the Doctor's companions, Amy, Rory and River Song.

Battlestar Galactica's Aaron Douglas stars in this Syfy Saturday night movie about a rescue team that's sent to find a missing expedition but happens upon one nasty monster instead. Oh, and it has something to do with Shangri-La.

Sookie faces trouble in Shreveport, and she has to call on her powers to save Bill. Meanwhile, Jesus tries to save Tara and Holly, Terry arranges an intervention for Andy, and Bill leads a gang of vamps in an attack on the Moongoddess Emporium.

On Lifetime's Drop Dead Diva (9 p.m.), Jane is fired and Teri is sued for slander in "Toxic." And on TLC's Livin' for the Apocalypse (10 p.m.), four people are profiled who believe the world will end in 2012.