Remember that enormous cliffhanger Eureka left us with last summer? Well, Syfy's giving us an early return for the series, and there's a three-episode arc that will resolve that cliffhanger. Syfy will also premiere new episodes of Fact or Faked: Paranormal Files, as well as the finale of season one's Monster Man.

Also this week, Adam Baldwin guest-stars on Castle, Bo's back for a second season of Lost Girl, the TAPS team probes the U.S. Naval Institute on Ghost Hunters, it's a Bat-Man takeoff on Ugly Americans, Tyler and Jeremy return to The Vampire Diaries, John de Lancie guest-stars on The Secret Circle, Teller's visit to Jake causes trouble on Touch, Michael prepares to move to Oregon on Awake, in the future in 2036 a battle rages on Fringe, a creature bounty hunter is after a freedom fighter on Grimm, Sam and Dean try to find a missing hunter on Supernatural, electric aliens cause trouble on Syfy's Alien Tornado, Emma tries to find answers regarding Kathryn on Once Upon a Time, and Robb Stark's victory on the battlefield angers Joffrey on Game of Thrones.

Here's the Eureka/Warehouse 13 crossover you asked for!
Need some comfort food? 10 sci-fi shows to binge and chill with during quarantine

Here's what we have to look forward to this week on sci-fi, fantasy, and paranormal TV.

Season-five premiere! When last we left Eureka, the Astraeus and crew vanished just before takeoff. In the premiere of the final season, the crew struggles to land the Astraeus while Carter and Henry try to figure out what happened to the crew. Meanwhile, changes abound in Eureka. The season-four finale, "One Giant Leap," airs at 8 p.m., just in case you need to refresh your memory about the cliffhanger.

Firefly reunion alert! Adam Baldwin (Chuck, Firefly) guest-stars as Ethan Slaughter, a tough gang unit detective whom Castle partners with when things get strained with Beckett. Unfortunately, Castle quickly learns that Slaughter, whose last two partners have died, may not exactly have his back.

Season-two premiere! You've got to love a short break, or, in this case, no break! Lost Girl goes right from its big season-one finale into a big season-two premiere. Let's just say there's going to be more than a little fallout from Bo's battle with her mom, Trick's and Dyson's sacrifice to save her, and the Light Fae bombing. In the opener, a nomadic Fae sideshow arrives with a plot to use the confusion surrounding the bombing to their advantage.

Returns with new episodes! The team is back to put video and photographic evidence to the test as they investigate the case of a sleeping Atlanta woman who allegedly levitates, and then they delve into the possibility of the "Ice Man" of Los Angeles.

TAPS investigates the U.S. Naval Institute in Annapolis, Md., looking for the spirit of a marine. 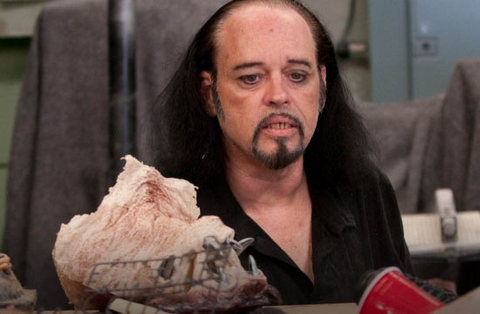 When Mark is bitten by the rabid Bat-Boy, he turns into a masked crimefighter who, with his sidekick, Koala Man, battles the catlike leader of New York's underworld.

Tyler's back, and it doesn't take long for him to suspect something's up between Caroline and Klaus. Elsewhere, Elena and Damon pay a visit to Jeremy in Denver in the hopes that the ghost whisperer will be able to connect with Rose.

John de Lancie alert! Q returns to TV in another devilish role as Royce Armstrong, Jake's powerful grandpa, who comes out of hiding to shed light about the events 16 years earlier. Meanwhile, the other Blackwell child is revealed.

Teller pays a visit to see Jake, which causes a problem. Meanwhile, Martin and Clea make a shocking discovery about her mother.

Michael prepares to move to Orgeon with his wife. Meanwhile, he helps a couple as they try to adapt to the witness-protection program.

The Observers are evil? Maybe? Walter in amber? Possibly? In the year 2036, the Fringe team and the Observers take part in an epic battle. Lost's Henry Ian Cusick guest-stars as an FBI agent.

Monroe and Rosalee convince Nick that the suspect in his latest case is actually a freedom fighter who is trying to escape a creature bounty hunter. Fringe's Sebastian Roché guest-stars.

When an old hunter friend, Annie Hawkins (Jamie Luner), disappears, Sam and Dean take on a powerful ghost who is haunting an abandoned house.

On the Travel Channel's Ghost Adventures (9 p.m.), the gang try to help another paranormal investigator after the tragic loss of his daughter. Also on the channel, on The Dead Files Special Investigation (10 p.m.), Amy and Steve probe the infamous Lizzie Borden case.

Syfy original movie! Jeff Fahey and Kari Wuhrer star as a farmer and a tornado blogger in this TV movie about what happens when aliens attack with deadly electrical tornadoes.

On Bio's My Ghost Story: Caught On Camera (10 p.m.), a car crash site and a chandelier have evidence of paranormal activity.

Emma pushes Regina for answers regarding what happened to Kathryn, and Mr. Gold tries to discover August's true identity. Meanwhile, in the fairy-tale world, Rumpelstiltskin wants to give up his powers so he can go back to the way things were with his son.

Joffrey decides to hold Sansa responsible for Robb Stark's victory on the battlefield. Elsewhere, Arya and Gendry are held at the torturous Harrenhal, and Daenerys and the khalasar try to find salvation in the city of Qarth.

On TLC's Long Island Medium (9 and 9:30 p.m.), Theresa tries to get Victoria to help around the house in "Wheelin' & Dealin'," and she runs into a skeptic in "Long Island Romance."