Just as the summer television season starts to get some momentum, it's time for the July 4 holiday weekend. Luckily, most of the significant shows, like Falling Skies and True Blood, just started, so we'll get new episodes of those. And we'll get a new Wilfred, which sends the dog man to the beach with his new best bud.

Also this week, there's another animal attack on Teen Wolf, Chloe meets the leader of the San Francisco Mai on The Nine Lives of Chloe King, Dick Van Dyke reunites with the Chitty Chitty Bang Bang car on Hollywood Treasure, magician Dan White travels the world looking for real magic on The Supernaturalist, Bender dies on Futurama, it's a wet hot summer on the season-two premiere of Ugly Americans, and a whiteout hits on Outcasts.

Scott and Allison decide to skip school, while Lydia and Jackson find themselves at the site of another animal attack.

Chloe meets the leader of the San Francisco Mai, Valentina, who believes she should go into hiding. Meanwhile, when the Rogue call her mom, Chloe asks Alek to guard her.

On USA's Covert Affairs (10 p.m.), when Annie and her contact are targeted by an assassin in Argentina, they must go into hiding to survive as they attempt to figure out who's trying to kill them in "All the Right Friends."

Joe's hunt for Hollywood memorabilia takes him to New Jersey, and collectibles are examined that may be from Lost In Space, King Kong Lives and My Favorite Martian. And Jay Leno and Dick Van Dyke pop up when the Chitty Chitty Bang Bang car goes up for auction.

In this special from Discovery, magician Dan White travels the world to see if he can find real magic.

On Syfy's Haunted Collector (9 p.m.), the team checks out a Civil War bullet that might be the reason for a haunting involving a woman in Sharpsburg, Md., and a college student runs into what may be the ghost of a Revolutionary War British soldier in "Uncivil Spirit/Revolutionary Ghost." Then, on the Science Channel's Through the Wormhole with Morgan Freeman (10 p.m.), the brightest minds on Earth ask "Are There More Than 3 Dimensions?" And on ABC's Primetime Nightline: Beyond Belief (10 p.m.), Bill Weir delves into reports around the world of people who claim to have seen the Virgin Mary in "The Miracle Mysteries." 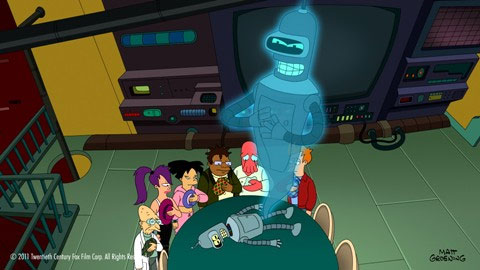 Season-two premiere! It's the summer camp from hell, literally, when Mark's given the job of running Camp Friendship, while Twayne and Callie try to use the camp to infiltrate a secret wizard compound where Leonard is training his apprentice.

Ryan tricks Wilfred into going to the dentist as a favor to Jenna, and Ryan gets in trouble when he takes Wilfred to the beach.

When a whiteout hits Forthaven, it threatens everyone. Meanwhile, Fleur attempts to find a peaceful solution between the colonists and the ACs.

Sookie and Tara reconnect, while Bill and Eric discover that a coven has been experimenting with something that may become a problem for the vampires. Elsewhere, Jessica battles with her desire for human blood and Sam finds out more about Luna's past. Think there's a chance anyone's going to live happily ever after anytime soon on this show?

Tom and his group attempt to retrieve motorcycles and reluctantly take Pope along. What could possibly go wrong? Meanwhile, Anne and Harris make a critical discovery.