TV THIS WEEK: Fringe gets freaky Over There, Grimm and more!

Even though the pickings are a bit slim this week, we still have Fringe, which continues to get its freak on as Lincoln takes a trip Over There, Grimm gets romantic, and things get dicey as Michael tries to stay Awake.

Also this week, Josh considers telling Julia he's a werewolf on Syfy's Being Human, Bo and Dyson play marrieds on Lost Girl, Robert Englund guests as a good guy on Criminal Minds, it's the season-three finale on Ghost Hunters International, Clive and his team make a spider on Monster Man, Stephen Hawking guest-stars on The Big Bang Theory, Martin meets someone who knew his deceased wife on Touch, Annie gets a glimpse of the future on BBC America's Being Human, and lots of stuff happens on Game of Thrones.

Here's what we have to look forward to this week on sci-fi, fantasy, and paranormal TV, along with non-sci-fi shows that feature sci-fi stars.

Aidan and Suren try to build a life together, Sally schools Zoe regarding her gift, and Josh weighs his options when it comes to telling Julia his secret.

Bo and Dyson go undercover at a country club as a married couple to help Kenzi's friend. Meanwhile, Bo's succubus friend reappears in her life.

Freddy Krueger alert! Robert Englund would seem like the perfect guest star for the often twisted Criminal Minds, but leave it to director Matthew Gray Gubler (aka Dr. Spencer Reid) to cast the most famous Freddy as a good guy. Englund plays a detective who is helping the team investigate a bizarre crime at an abandoned insane asylum.

Last week it was ants and bugs, and this week it's spiders as Clive and the gang create an arachnid for director Mike Mendez's feature, and Constance works on her own project.

On Comedy Central's Ugly Americans (10:30 p.m.), Callie turns herself into a man to get a promotion in "Mark Loves Dick."

Stephen Hawking alert! When Wolowitz gets a chance to work with Stephen Hawking, a thrilled Sheldon decides to do whatever it takes to meet his idol. 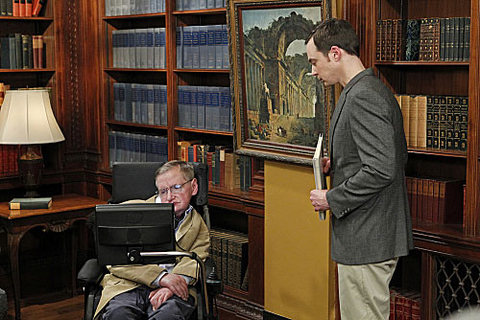 Martin meets a man who knew his wife before she died, a teen in Baghdad meets a U.S. soldier, and a lottery winner runs into a depressed pastor.

Michael's sleepless nights have a troubling effect in both worlds as he deals with a hostage crisis and is introduced to his son's girlfriend.

On CBS's Person of Interest (9 p.m.), the Machine spits out five numbers that are connected to New York crime families in "Flesh and Blood."

It's a double dose of Lincoln as our Lincoln travels Over There to work with Fauxlivia and his alt-self as they search for a vigilante who may be connected to the shape-shifters.

Romance is in the air over at Grimm as Nick and Juliette head off for a romantic weekend only to have trouble with the neighbors. And Monroe and Hank attend to matters of the heart.

On Fox's The Finder (8 p.m.), David Boreanaz (Bones, Angel) directs this week's installment, which guest-stars 50 Cent as a music mogul. On the Travel Channel's Ghost Adventures (9 p.m.), the crew heads back to Linda Vista Hospital in L.A., where Nick attempts to reconnect with the ghost of a young woman in "Return to Linda Vista Hospital."

Annie takes a trip to purgatory to check out the future, while Hal gets a blast from the past and Culter tutors Tom.

Theon heads home on a mission for Robb Stark and faces his bitter father, Tyrion causes trouble in the royal court as the Hand of the King, and Gendry gets a shocking revelation from Arya.

On TLC's Long Island Medium (9 and 9:30 p.m.), Theresa is distracted by spirits when she and her family volunteer at a soup kitchen during the holidays and when she takes a cooking class.