As the returning series begin to dig into their new seasons, V heats up this week when we get to see Anna and Jane Badler's Diana go at it, mystery people pop up on Primeval, and Camelot battles an invasion on Merlin.

And there's an encore of the premiere of The Cape, Jim's brother finds out about the family's powers on No Ordinary Family, there's a double Human Target, the GHI team explores the dark histories of two castles on Ghost Hunters International, Medium nears its end, and a giant monster threatens to destroy mankind on Syfy's movie Behemoth.

Encore performance! If you missed Sunday's premiere, you can check out the first two episodes of The Cape with David Lyons and Summer Glau. In this new series, an ex-cop (Lyons) becomes a superhero when he's falsely accused of murder. He decides to take on the city's supervillain, Chess (James Frain), with hopes that he will one day be able to return to his family. Glau plays Orwell, a mysterious investigative blogger. The Cape premieres with new episodes next week on Mondays at 9 p.m.

Lost's Rebecca Mader joins the cast! When Jim's brother (Jason Wiles) arrives at the Powells' for an unannounced visit, he learns about their abilities and attempts to use J.J.'s brain power to score at the racetrack. Meanwhile, Stephanie gets a promotion from the mysterious VP at her company, Victoria Morrow (Mader), and Daphne suspects that a student in her high school who's been accused of a crime is innocent. Mader will appear in at least three episodes.

Jane Badler alert! Original V fans will finally get their Jane Badler fix, when her new character (Anna's mother, Diana) faces off with Anna and we get to see where the V queen got all her nastiness from. Meanwhile, Erica has Tyler's blood tested, and we get a hint why Anna's so interested in Tyler.

Two episodes! In another double-episode outing for Human Target, Chance and Guerrero take in an evening at the opera when Chance suspects trouble for Ilsa and her sister-in-law. And then it's a Guerrero episode (and we really can't have enough of those!), where Guerrero ends up in jail after he's framed for a friend's murder.

Here's a preview of both episodes and a sneak peek of "Imbroglio":

The team heads to the Ukraine to investigate Pidhirtsi Castle and then to Poland to dig into the reports of spirits at Reszel Castle.

On the History Channel's 10.0 Megaquake (9 p.m.), scientists dig into the question of when and where a super quake might happen.

In this second-to-last episode of the series, a desperate man tries to get Allison's help in finding his missing wife. Meanwhile, Marie freaks out while taking a spelling test. Miguel Sandoval, who plays Duvalos, directed the episode. 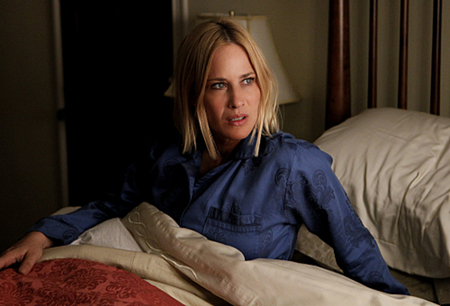 In the conclusion to this epic two-parter, with King Uther suffering from madness, Arthur and his knights must defend Camelot from an invasion. Meanwhile, a poisoned Merlin battles to stop Morgana. Anyone else happy to see Merlin and Primeval back in action?

On the Cartoon Network's Star Wars: The Clone Wars (8:30 p.m.), there's a new episode called "Monster." And on the Travel Channel's Ghost Adventures (9 p.m.), Zak, Nick and Aaron return to re-investigate the site that launched the series, Nevada's Goldfield Hotel.

The team encounters mysterious people at the latest anomaly site, in a theater, along with deadly creatures.

Syfy's Saturday Night at the Movies! Eureka's Ed Quinn and The X-Files' famed Cigarette Smoking Man, William B. Davis, star in this horror flick about a group of scientists who investigate volcanic activity from a dormant volcano only to discover one big, nasty Godzilla-type monster is waking up and about to destroy mankind.