While it might seem like slim pickings in this traditional dead zone between Christmas and New Year's, there is the long-awaited season-four premiere of BBC America's Primeval on New Year's Day and marathons for Chuck and True Blood. And there's a Saturday-night V marathon to get you ready for next week's season-two premiere of the alien invasion series.

NBC offers up a three-episode Chuck-athon starting with the fourth season opener, "Chuck Versus the Anniversary," which kicks off Chuck's search for his mom (Linda Hamilton). Then, on "Chuck Versus the Aisle of Terror," Team Bartowski hunts down a scientist (Robert Englund) who's plotting to release toxins that cause nightmares. And on "Chuck Versus the First Fight," we meet Chuck's mom's handler, Gregory Tuttle (Timothy Dalton).

Here's a promo of "Chuck Versus the Anniversary":

If you're feeling like you need a True Blood fix, HBO is running the entire third season this week, starting off the season opener, "Bad Blood." In the third season, Sookie hunts for the missing Bill and finds herself up against werewolves and one badass vampire named Russell Edgington. All 12 episodes of the season will air this week from Monday through Thursday, beginning at 8 p.m. each night. The first four episodes air on Monday.

Here's a promo for the season:

Three more episodes air in HBO's season-three marathon. In "Trouble," Sookie and Alcide try to find out more about Russell's werewolves, Tara struggles to get away from Franklin in "I Got a Right to Sing the Blues," and Eric plots to get more information from Sophie Anne in "Hitting the Ground."

Here's a promo of "Trouble":

Last scheduled episode! In what may well be the last episode to air of the canceled series, we might actually learn why the Blooms were really brought back into the spy game. In the episode, Samantha and Steven head off for a romantic getaway in Greece but find themselves rerouted to Tel Aviv to defuse a hostage situation. Two episodes remain unaired of the 13 produced, which may or may not air later on NBC. 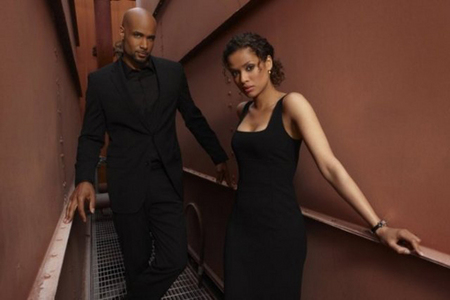 On HBO's True Blood marathon (8 p.m.), two more episodes air from the third season. First up, Alcide takes off for a family emergency, leaving Sookie unprotected, in "Night of the Sun." And we learn more about Sookie's family ties and Russell vows vengence in "Everything is Broken."

In the final three episodes of HBO's season-three marathon, Sookie gets a dire warning from Bill in "I Smell a Rat," Eric continues with a plan for revenge in "Fresh Blood," and in the season-three finale, "Evil Is Going On," a frustrated Sookie considers what life might be like without vampires.

Here's a look at the final three episodes:

On the History Channel's Ancient Aliens (9 p.m.) it's a look at "Alien Messengers."

To whet your appetite for the premiere of V's second season on Tuesday, Jan. 4, at 9 p.m., ABC's airing the show's pilot and the last two episodes of the first season. In the show's "Pilot," alien ships arrive above the world's major cities and the Visitors claim to be friendly. Then, in "Fruition," Erica discovers that a scientist has developed a weapon that may work against the Vs. And in the season-one finale, "Red Sky," Chad makes a startling discovery and Erica and Tyler get an invitation from Anna.

Here's a preview of "Red Sky":

Season-four premiere! The dinos are back! After being trapped for a year in the Cretaceous period, we discover what happened to Abby and Conner. And a new ARC team takes over the job of dealing with the creatures who slip through anomalies into the present. In exciting BBC America news, we get to see the premiere on the same day as the British premiere. Season four will have seven episodes. Season five is also in production with an additional six episodes and is set to air late in 2011.

Here's a promo and a meet-the-new-team sneak peek:

So what are you going to watch?