TV THIS WEEK: Smallville turns 200, Sanctuary's back and more!

It's a big week for Smallville, which celebrates its 200th episode with a special Christmas Carol-type episode, except Brainiac 5.0 is the ghost of Clark's past, present and future. Sanctuary returns for a third season with a resolution to last season's Kali/Big Bertha cliffhanger. And the Cartoon Network unveils its latest live-action The Prisoner-esque series with Tower Prep.

Beyond that, Armand Assante returns to Chuck, Sophia is interrogated Jack Bauer-style on The Event, Jim and George track thieves on No Ordinary Family, the crew may have a way to get home on Stargate Universe, Lacy screws up Barnabas' plan on Caprica, Wolowitz dreams up Katee Sackhoff and George Takei on The Big Bang Theory, Fauxlivia and Peter get up close and personal on Fringe, Scanlon's in trouble on Medium, and Bobby tries to get his soul back from Crowley on Supernatural.

Here's what we have to look forward to this week on sci-fi, fantasy, paranormal and spy-fi TV, along with non-sci-fi shows that involve sci-fi or fantasy storylines or stars.

It's an Ellie and Awesome episode! Armand Assante returns as Premier Goya and convinces the Awesomes, along with Chuck and Sarah, to head to Latin America. Meanwhile, Chuck and Sarah decide to work on their communication skills. Back in Burbank, Casey's daughter begins dating someone he isn't going to approve of. Tia Texada and Mekenna Melvin guest-star.

With strange things happening during last week's kick-ass cliffhanger, I don't know how much closer we are to learning what The Event actually is, but it looks like one hell of a ride. In tonight's episode, the White House struggles to make sense of what happened with the plane's passengers, and Sophia is interrogated when a biological threat becomes imminent. Meanwhile, Collier learns Vicky's secret while searching for Leila, and Hal Holbrook pops up as a businessman with White House connections.

Pranks involve a séance and a freak show, along with a medical experiment that takes a disturbing turn.

Stephanie's ring is stolen when thieves hit an extravagant wedding, forcing Jim and George to track the thieves. Meanwhile, Daphne considers telling a friend about her abilities and J.J. asks her to read a cute girl's mind.

When Destiny docks with a ship that looks a whole lot like Destiny itself, Lt. Scott and his team discover the ship's unique purpose, along with the possibility that it may have enough power to open a stargate back to Earth.

Things get tough for Lacy when she doesn't follow through on a bombing planned by Barnabas, and the Adama brothers go after Daniel's former colleagues. Meanwhile, Amanda struggles to deal with all she's lost.

On the Animal Planet's Lost Tapes (10 & 10:30 p.m.), paranormal experts investigate an attack on law-enforcement officers by a creature in West Virginia in "Devil Monkey" and look into the death of a Himalayan explorer in "Yeti."

Steven and Samantha end up in Dublin on the trail of a missing CIA hard drive, and Samantha has second thoughts when it comes to talking about the couple's past. Meanwhile, Lizzy finds herself more involved in the catering business.

Steve and Tango are back and on the hunt with the TAPS team at the Ohio home of author James Thurber, and a 19th-century casino is investigated.

On Comedy Central's Ugly Americans (10:30 p.m.), Mark attempts to help Leonard with his magic issues, and Twayne meets his soulmate. And on the Science Channel's Sci Fi Science (10 p.m.), Dr. Kaku looks into how to survive traveling through a black hole in "Black Hole Odyssey."

Katee Sackhoff and George Takei guest star alert! Wolowitz gets embarrassed when a secret is revealed, and Sheldon and Raj go to war at work.

With The Vampire Diaries and Nikita off for reruns this week, you may want to check out Bones. David Alan Grier makes a deal with Bones to become her latest squintern in exchange for his being able to host his children's science show at the Jeffersonian. Meanwhile, the team tries to find out who killed a bounty hunter and dismembered the corpse.

It's back to the Over Here or the Blue Universe as we get to learn what the heck Walter's going to do with Massive Dynamics now that he's the sole owner. Meanwhile, Thomas Jerome Newton needs the services of a sleeping shape-shifter, and Fauxlivia and Peter get closer.

Team Truth treks to Nairobi, Kenya, for a look into a haunted volcano and then to Madagascar to investigate the Kalanoro, a small hairy man-like creature that is supposed to have magical abilities.

As Ariel gets ready to leave for college, Allison looks into the murder of a missing girl. Unfortunately, Scanlon's dead brother may be linked to the murder, and that ghost has an ax to grind. So could this be the end of Lee Scanlon? Tom Wopat guest-stars.

200th episode! Lois takes Clark to his five-year reunion at Smallville High where he runs into Brainiac 5.0, who takes him on a journey to learn the truth about his past, present and future, including the real circumstances of Jonathan's death. Meanwhile, Clark explores his relationship with Lois and his future as a superhero. James Marsters guest-stars as Brianiac 5.0.

Star Jensen Ackles directs! While Bobby attempts to get Crowley to return his soul, Dean runs into vampires and a truth curse, which just might give him some answers when it comes to Sam.

Season-three premiere! In the conclusion to last season's cliffhanger, Magnus risks her life to save Big Bertha from Wexford, and a tidal wave threatens the coast of Mumbai, India. Meanwhile, Will's life hangs in the balance as he tries to reach out to Kali by re-establishing his mental connection.

Here's a a preview of season three and a "Kali: Part 3" sneak peek:

And other Friday shows of interest

On The Cartoon Network's Batman: The Brave and the Bold (7 p.m.), while trying to capture Two-Face, Batman ends up with amnesia and begins to believe he's a criminal in "The Mask of Matches Malone!" And on the channel's Star Wars: The Clone Wars (9 p.m.), Ahsoka reluctantly teaches a class on Mandalore in "The Academy." On Disney's The Wizards of Waverly Place (8:30 p.m.), a secret government agency believes the Russos are wizards in "Wizards Exposed." And on the Travel Channel's Ghost Adventures (9 p.m.), the crew heads to the "Stanley Hotel" in Estes Park, Colo., which inspired Stephen King to write The Shining.

A group of tormented teens turn the tables on their tormentors. Marc Donato stars.

Series premiere! The Cartoon Network's latest live-action series follows a rebellious teen named Ian Archer (Drew Van Acker), who wakes up in a mysterious academy filled with students who have special abilities. Unable to get answers to his questions about where he is and why he's there, Ian forms a secret group with fellow students intent on finding answers.

Trapped in a remote location, seven college students find themselves forced to kill their friends or die. Ryanne Duzich stars.

And other Saturday shows of interest

The Cartoon Network's Scooby-Doo! Curse of the Lake Monster (7 p.m.), offers up a live-action Scooby movie involving Daphne (Kate Melton) and the Mystery Inc. gang taking summer jobs at her uncle's country club and discovering strange things going on by the lake. And the Travel Channel's Ghost Stories (10 p.m.) delves into the story of "Toni Jo Henry," the first woman sentenced to death in Louisiana's electric chair.

Season-five premiere! The PRS team arrives in Ryan's hometown to investigate a southern plantation with a dark history in "House Arrest," and then they travel to a New England town to help a police officer whose family is being terrorized by demons in "They Come Out at Night." 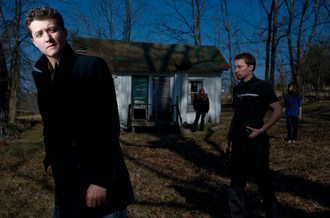 And other Sunday shows of interest

On A&E's Psychic Kids: Children of the Paranormal (10 p.m.), it's the season-three premiere, which focuses on a 12-year-old boy who is haunted by a ghost and a girl who has trouble sleeping due to spirits in "Banishing Evil." And on Animal Planet's The Haunted (10 p.m.), a boy is terrified by a ghost he calls "The Bloody Man."