It looks like we'll find out more about the Teen Lizard this week on Teen Wolf, Wilfred has issues with Ryan in the season-two premiere, and Fact or Faked brings back Destination Truth's Josh Gates for a big two-hour finale that includes a trip to Stonehenge.

Also this week, Holly gets a new lease on life on Eureka, Bo deals with an underground Fae fighting ring on Lost Girl, Joe finds more sci-fi props on the season finale of Hollywood Treasure, Leela gets in the middle of the latest presidential election on Futurama, Alex may finally make a connection with Charlie in Saving Hope, UFO seekers go Chasing UFOs in a new series, Danny Bonaduce and Barry Williams battle it out with Syfy's Bigfoot, survivors are discovered on Falling Skies, and Bill and Eric have a plan Sookie's not going to like on True Blood.

10 Bigfoot sighting videos that could turn you into a believer
TV THIS WEEK: Eureka's final season, Firefly reunion and more!

Complications arise during Carter and Allison's honeymoon, and the plot to bring Holly from the virtual realm into the real one goes a little Frankenstein for the team at Eureka.

Could Lydia be the lizard-like shape-shifter? Derek thinks so, so it's up to Scott and the gang to try and protect her.

Two hour, two-episode season finale! Destination Truth's Josh Gates and WWE's Kofi Kingston pop up in this double dose of Fact or Faked. First up, the team heads to England and Kentucky for investigations. Then it's off to Stonehenge with Kingston and to Iceland with Gates as season two comes to a close.

Hollywood Treasure (Syfy) 10 p.m. - "Vampires, Swords and the Queen of the Night"

Season finale! Joe and the team go after props from Bram Stoker's Dracula, Whitney Houston's costume in The Bodyguard and a sword that may have been screen-used in Braveheart.

Leela gets into the spirit of the latest presidential election when she becomes a campaign manager for the candidate going up against Richard Nixon in the 3012 election. Unfortunately, his Earth certificate is missing, leading to an Earther movement to force him to prove his Earthly origins. 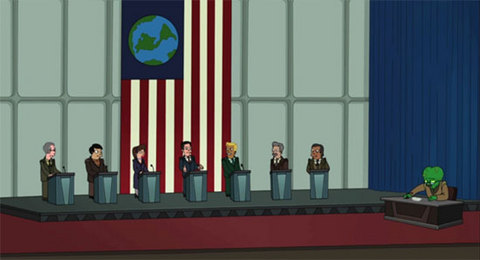 John and the crew take on haunted objects at a Michigan home and a former asylum in Virginia.

It's a trip to the SUNY Geneseo, where a former student has paranormal experiences in a dorm room.

On the Science Channel's Through the Wormhole With Morgan Freeman (10 p.m.), "What is Nothing?" is examined. No, it's not an episode of Seinfeld. Instead the scientists look at the mind-bending science of quantum mechanics.

An exhausted Alex takes the night shift in the ER, where things get tense. Meanwhile, Charlie tries to help a suburban punk. But will Charlie and Alex will finally make a connection?

Season-two premiere! The shaggy man/dog is back for another season. In the opener, Wilfred decides to stop helping Ryan because he thinks he's selfish.

On Disney XD's Tron: Uprising (8 p.m.), Beck struggles to keep his memory after his identity disc is stolen.

Two-hour series premiere! In the new series, Destination Truth's Erin Ryder, along with scientist Ben McGee and ufologist James Fox, are on the hunt to find the truth about UFOs, and they want answers. First up, it's a trip to Texas to check out the stories of more than 30 eyewitnesses who all saw strange lights in the sky. And then it's off to central California, where some of the citizens believe the government is using an alien aircraft to spy on the local population.

On the Travel Channel's The Dead Files (10 p.m.), Amy and Steve investigate the abandoned New Mexico State Penitentiary in Santa Fe, which had one of the worst prison riots in American history.

It's the battle of the '70s pop culture icons as The Partridge Family's Danny Bonaduce goes toe to toe with The Brady Bunch's Barry Williams while a high-kicking, gigantic Bigfoot goes on a rampage near a small town that's about to hold a festival. Also on board for the fun are Twin Peaks' Sherilyn Fenn, Alice Cooper, The X-Men's Bruce Davison, Fringe's Andre Royo, Howard Hesseman and Billy Idol. Davison also directs.

Hal and Ben make a discovery. Meanwhile, Matt finds himself in a dangerous situation and Weaver runs into someone he thought he'd lost.

Eric and Bill's latest plan involves Sookie, Pam decides to be a good maker for Tara, and Roman hunts for a traitor in his midst. Meanwhile, Sam gets a visit from some old friends and Alcide gives the Pelts bad news.

On Lifetime's Drop Dead Diva (9 p.m.), Jane causes an international incident when she tries to get asylum for a young woman who is being forced to marry a prince.