TV THIS WEEK: The Event and SGU return, Fringe flies and more!

Reruns continue to dominate the schedule, but there's a couple of bright spots, including the midseason returns of The Event and Stargate Universe. Meanwhile, on Fringe, thieves defy gravity as Walter digs into the damage he's done.

Also—it's Josh's time of the month on Syfy's Being Human, Anna readies her Blue Energy reactor on V, the TAPS team explores the U.S.S. Olympia on Ghost Hunters, Leonard must choose between Priya and Penny on The Big Bang Theory, Malory tries to get a role in a spy movie on Archer, the Jedi try to escape the Citadel on Star Wars: The Clone Wars, Gauis falls for the wrong woman on Merlin, Mitchell and Annie explore their relationship on BBC America's Being Human, and aliens invade in the Syfy original movie Battle of Los Angeles. However, rerun madness on the networks means no new episodes of Chuck, No Ordinary Family, The Vampire Diaries, Nikita, Smallville or Supernatural.

Two-hour midseason premiere! After the big midseason cliffhanger THREE MONTHS AGO, which saw Thomas launch a satellite and send a message into space, The Event is back in action as President Martinez and his chief of staff (Roger Bart) use all their resources to decrypt the message. Meanwhile, an Alaskan senator (Virginia Madsen) discovers the existence of Mount Inostranka and prepares to out the revelation on "Hardball With Chris Matthews." And Sean and Leila get another lead on where to find Samantha.

With Josh's time of the month nearing, he struggles with his developing relationship with Nora, and Sally discovers ghosts in an old and unused part of the hospital. Meanwhile, Aidan finds himself drawn to help a boy who is being tormented by bullies.

Midseason premiere! With only 10 episodes to go before we say goodbye to Stargate, it's time to get back to the action with the Destiny, which is in the middle of a battle with attacking drones and on the verge of annihilation. As the series returns, Chloe tries to get help from a surprising source in an effort to buy the Destiny more time, and Brody and Volker attempt to repair the ship's shields.

With Anna ready to activate the Blue Energy reactor, Diana tries to convince Lisa and Marcus to move against the V queen.

The TAPS team investigates a Massachusetts home where a family has been haunted for multiple generations, and then it's off to Philadelphia to explore the U.S.S. Olympia, a warship that has such tight quarters that the team has to leave the camera crew behind and go in on their own.

On Syfy's Face Off (10 p.m.), the five surviving contestants must use their skills to transform themselves in "Family Plot." And on SOAPnet's Being Erica (11 p.m.), the time-traveling Erica heads back to Black Creed Pioneer Village to help an estranged friend in "Jenny From the Block."

When Priya asks Leonard to stop spending time with Penny so he can spend more time with her, he finds himself with a difficult choice to make. Meanwhile, Sheldon gets annoyed when Howard keeps pestering him about how a magic trick was done. 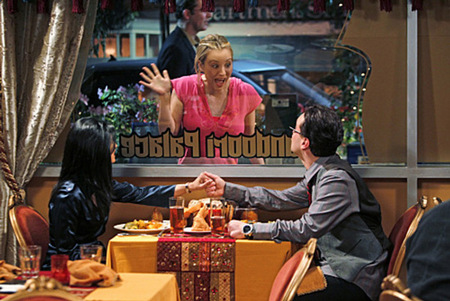 Hollywood star Rona Thorne (voiced by Rachael Harris) joins the team to research her latest role in a spy thriller, which has Malory trying to get a role for herself in the movie. Meanwhile, Pam absconds with Rona's diary.

In part three of a special three-part event, after their ship is destroyed, Anakin and Obi-Wan try help the prisoners escape from the Citadel. Meanwhile, Plo Koon attempts escape on his own.

The Fringe team delves into thieves who seem to be able to defy gravity, and Walter tries to figure out how much damage he's done to the universe.

When Gaius falls for an old flame (Pauline Collins), it's up to Merlin to convince him that the woman is actually under the spell of a Manticore who plots to kill Uther.

On the Cartoon Network, there are new episodes of Young Justice (7 p.m.), Ben 10: Ultimate Alien (7:30 p.m.) and Generator Rex (8 p.m.). And on Disney's Wizards of Waverly Place (8 p.m.), things get complicated for Max when he's accidentally turned into a girl in "Back to Max."

Mitchell is none too happy when werewolf Tom McNair (Robson Green) pays George and Nina a visit, thanks to Lia's prophecy. Meanwhile, Annie and Mitchell have trouble with the evolution of their relationship.

Syfy's own war is going on as their Battle of Los Angeles faces competition at the theaters from Battle: Los Angeles, another alien invasion movie that uses L.A. as its battleground. Nia Peeples and Kel Mitchell star in the Syfy movie, about two soldiers who try to take down an alien mothership to save humanity.