It may seem like the summer shows just started, but we're looking at a couple finales this week as Falling Skies finishes its first season with a two-episode sendoff and Outcasts completes its first and final season. And there's also plenty of excitement over at Torchwood, where the gang is in for one big revelation.

Also, Eureka floats, Jeri Ryan pops up on Warehouse 13, the Alphas take on a terrorist attack, Scott battles to protect his friends on Teen Wolf, Chloe and her mom find trouble on The Nine Lives of Chloe King, Leela goes all Moby Dick on Futurama, Mark gets cloned on Ugly Americans, one dimension isn't enough in the new Phineas and Ferb movie, sparks fly on Haven and, thanks to the witch possessing Marnie, things get hot for the vamps on True Blood.

Floating alert! Remember that Eureka image of people and objects in the town floating in air that's been around since the series began? Well, the writers finally got around to writing an episode that involves the town's first bank robbery, while dealing with a very serious floating issue. Wil Wheaton and Felicia Day guest-star. In fact, they'll both be around for much of the season.

Jeri Ryan alert! Star Trek: Voyager's Seven of Nine pops up as Pete's ex-wife, who arrives in town with plans of remarrying. Meanwhile, Steve and Claudia hunt for an artifact at a Civil War re-enactment.

Dr. Rosen and the gang go after Red Flag and discover an autistic woman with a unique power who may be able to help them stop a terrorist attack that would have a big impact on Alphas.

The end is near, for season one that is, as Scott struggles to figure out a way to protect his friends and Allison learns more about her family's history. Meanwhile, Stiles continues to dig into Derek's family secrets.

Here's a preview of the final episodes:

Chloe's mom decides to get to the bottom of Chloe's secretive behavior by searching her laptop. Meanwhile, Chloe and her mom end up in trouble thanks to a thief, and the Uniter finds herself with big-time boy trouble when both Brian and Alek become upset with her.

On USA's White Collar (9 p.m.) Dollhouse's Eliza Dushku guest-stars as an Egyptologist in "On the Fence." And on the network's Covert Affairs (10 p.m.), when Annie's college professor is killed, she discovers he was secretly a CIA operative in "Sad Professor."

The GHI gang travels to England's Castle Rising to search for a she-wolf, and they meet a groundskeeper who believes spirits are targeting him.

It's a good thing historian and symbologist Ashley Cowie isn't taking on anything big. As if! This time the adventurer is on a quest to find the staff of Moses in Israel, and then he's on the hunt for the Stone of Destiny in Scotland.

On USA's Royal Pains (9 p.m.), No Ordinary Family and Angel's Julie Benz guest-stars as an alpaca farmer in "An Apple a Day." On the Science Channel's Through the Wormhole With Morgan Freeman (10 p.m.), scientists explore the question "What Do Aliens Look Like?" And on ABC's Primetime Nightline: Beyond Belief (10 p.m.), Bob Woodruff discusses an out-of-body experience he had and explores the topic with theologians, preachers and scientists in "The Other Side."

It's one high-flying adventure when Leela becomes obsessed with hunting a four-dimensional space whale.

Callie makes a clone of Mark so the Department of Integration can win a bowling tournament. What could possibly go wrong? 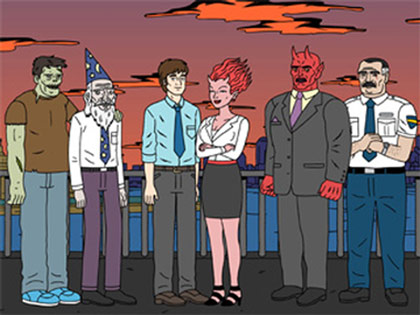 On USA's Burn Notice (9 p.m.), Michael and Sam attempt to rescue a sick boy from his father in "Besieged." On FX's Wilfred (10 p.m.), Wilfred and Ryan both find new love interests in "Pride." And on the History Channel's Ancient Aliens (10 p.m.), it's a look at Hindu scripture and the Centaur, Minotaur and Medusa in "Aliens and Monsters."

Phineas and Ferb: Across the 2nd Dimension (Disney) 8 p.m.

Movie special! The animated film, inspired by Raiders of the Lost Ark, Jaws and ET, sets Phineas and Ferb loose in an alternate universe controlled by Dr. Doofenshmirtz, where all things related to summer have been banned.

Big episode alert! Creator Russell T Davies has said that this is the big episode that explains what Miracle Day really is. In the episode, the Torchwood team go undercover thinking they know what's going on. Meanwhile, mortality is about to make a comeback in a shocking way.

Jason Priestly and Edge alert! It was kind of sad to see Audrey 2 go last week, but there's some star power hitting this week as Priestly joins the show for a four-episode arc and Edge stops by as Haven's cleaner. In the episode, Audrey and Nathan investigate electrocutions that strike Haven and kill a community leader.

Series finale! When a virus threatens the people of Forthaven, Berger lays the blame on the ACs in an attempt to topple Tate's government and take over. Goodbye Outcasts! Are you going to miss it?

Marnie's powers threaten the vampires, forcing Bill to take action. Meanwhile, Eric utilizes his amnesia (no doubt to continue getting hot and heavy with Sookie!), Jessica considers a future without Hoyt, and Luna makes a discovery about Sam.

Two-episode season-one finale! The humans strike back against the aliens, while Tom stays at camp with the civilians to protect them. Later, Tom has a close encounter, and he learns more about the aliens' motives. So what do you think? Has it been a thumbs-up or -down for you when it comes to Falling Skies?

On Lifetime's Drop Dead Diva (9 p.m.), it's all about moms when Jane's mom gets arrested for using an airplane's emergency exit, while Deb's mom considers suing a casino that uses a photo of Deb in an ad campaign in "Mothers Day." And on Discovery's Into the Universe With Stephen Hawking (9:30 p.m.), the famous physicist takes a look at the birth of the universe, time travel and aliens.