TV THIS WEEK: True Blood and Torchwood get bloody, and more!

As summer comes to a close, so do the seasons of several of our favorite summer series as Futurama gets re-animated and Torchwood and True Blood get bloody, if for very different reasons.

Also this week, TAPS goes all Dark Shadows on us on Ghost Hunters, Syfy digs into more ghostly encounters on the new series Paranormal Witness, Ryan gets existential on the Wilfred season-one finale, Jason Priestley directs Haven, Amy is in need of rescuing on Doctor Who, and Tahmoh Penikett goes dragon-esque hunting on Syfy's Jabberwock. Meanwhile, Syfy's Monday lineup took a holiday this week.

Good news, everyone! Futurama star says cast members are open to possible reboot: 'We all talk about it'
Bite our shiny metal list of Futurama's top 10 running jokes and catchphrases

TAPS pays a visit to Seaview Terrace in Newport, R.I., the setting for the gothic soap opera Dark Shadows, to investigate reports of a door handle that turns on its own and ghostly footsteps and banging. Think they'll find Barnabas Collins lurking round the corner?

New series! This documentary series takes a look at personal accounts of paranormal experiences. First up: a Baltimore family must deal with their 5-year-old daughter's invisible friend, a friend who is anything but friendly to the family. And then a mother and daughter have a strange encounter with a girl in Florida.

Season-six finale! Here's a chance to see your favorite Futurama characters drawn in not one but three different animation styles: classic black and white, old-school videogame and Japanese anime. Futurama has already been renewed for a seventh season of 26 episodes, which will be split into two runs over 2012 and 2013. 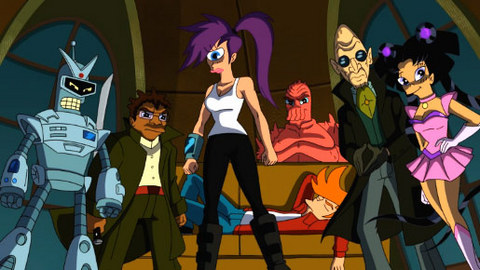 Season-one finale! An existential crisis is unleashed when Ryan ignores Wilfred's advice. Wilfred has been renewed for a second season. 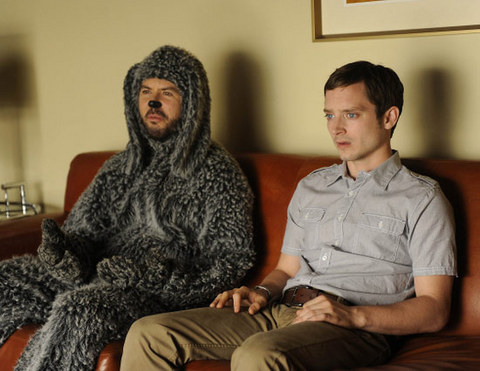 On the History Channel's Ancient Aliens (10 p.m.), it's a look at "Aliens, Plagues and Epidemics." On the midseason finale of USA's Burn Notice (9 p.m.), Michael goes to extreme lengths to clear his name in Max's murder.

A season-four-ish finale! It all comes down to this! Jack and the gang face off against the Three Families in a desperate attempt to save the human race. But will it mean the ultimate sacrifice?

The Haven police station goes into lockdown when a mysterious infection takes out a police officer, leaving Audrey, Nathan and Duke trapped, along with other Haven residents. Jason Priestley directs and puts in his fourth guest appearance as the afflicted Chris Brody.

When Amy is quarantined at an alien hospital, it's the Doctor and Rory to the rescue.

In this Syfy Saturday-night action movie, Tahmoh Penikett (Battlestar Galactica, Dollhouse) stars as a courageous man who battles a dragon-like beast to save the woman he loves.

Season-four finale! That Lafayette needs to keep his mouth shut! Sookie digs into Bon Temps' past during a Wiccan festival called Samhain in an effort to put an end to Marnie's plans, as the witch's latest incarnation stirs the pot to make more trouble for the vamps.