Pete Docter, director of Disney/Pixar's next animated movie, Up, and producer Jonas Rivera screened 17 minutes of footage from the 3-D movie at WonderCon over the weekend and revealed the creative process behind it in an exclusive interview with SCI FI Wire.

Up tells the story of 78-year-old Carl Fredricksen (Ed Asner), who in his golden years sets out on the adventure of a lifetime by tying thousands of helium balloons to his house. The only problem is that Carl gains an unexpected traveling partner in 8-year-old Wilderness Explorer Scout Russell (Jordan Nagai), whom he finds on his porch. Together they embark on a journey to remote South America in a quest to find the legendary Paradise Falls. Up opens May 29.

The footage screened included part of what we viewed earlier, including Carl's first meeting with Russell; Carl's house ascending; Carl and Russell's first encounters with the giant bird, Kevin; and Carl and Russell's befriending Dug (not Doug, we're told), the talking dog.

Following is an edited version of our exclusive interview with Docter and Rivera. There may be spoilers ahead!

Where are you guys at in the process of making this film?

Docter: We're close to being done. We're five weeks away from being completely done with the film. We have 15 more minutes of music to record. We're going up to Skywalker Ranch to do the sound next week. ... There's a handful of shots left to light. So we're very close.

Rivera: Yeah, and it's post-production.

The score is by Michael Giacchino?

Rivera: He's fantastic. I can't wait for people to hear the score. It's wonderful. ...

This is an unusual idea, to say the least.

Docter: It is, and it's been one of the challenges just kind of telling people what this movie is, but it's comedy and adventure built on a sort of bedrock of emotion. ... One of the things that's really important to me in everything that I've worked on is finding some relatable thing that the audience can identify with, ... that they understand is true for them in their own life. And in this film—we were talking about it a minute ago—this idea that you get swept up in the hustle-bustle of every day, and you have to fly here and na na na, and ... it's only once in a while you sort of wake up and go, "Wow, the time I have with my family and friends is really a precious thing, and it fades. It goes away." People grow up, they move away, they die, you know? ...

I think the first time we showed it to Jonas, he gave a great compliment. He just said, "I want to go home and be with my kids and be with my wife." And if you can kind of wake people up a little bit and just for 15 minutes make them appreciate all of the great things that they have, that's what this movie is about. ... 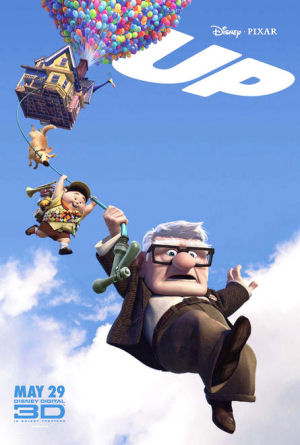 This feels to me like a kind of movie we haven't seen for a long time, which is the adventure movie, which they used to make a lot of and they don't anymore. And you even have sort of a retro feel to some of this, like the Explorers Club ...

Docter: Yeah, exactly. ... We came up with this idea of a floating house, and we worked backwards from that, thinking, "How did this guy get into the floating house?" And we came up with this whole backstory of him meeting this girl, and they fell in love, and they had this whole relationship. And this failed promise, that they didn't ever get to go down to South America to live this adventure that they always wanted to do. And so it was kind of based on that.

But that led us to this montage kind of feel, almost like a Capra film, reaching back to the '30s, because that's where the film takes place when we start out. And we wanted to infuse that through the rest of the film. To make kind of an homage to those films that we grew up with that we loved: ... Peter Pan and Alice in Wonderland, as well as ... Wizard of Oz and the Capra films ...

Rivera: It's a Wonderful Life.

Docter: Yeah, exactly. So ... it was a definite conscious choice to try to incorporate elements of those.

You also have this antic stuff: Kevin the bird and the talking dogs, which capture the essence of dogness.

Docter: Yeah. I mean, there've been a lot of talking-dog movies, but I don't think anybody's really approached it this way, which is to think as much as we could about, like, what would a real dog [say]? What's important to a real dog? "Squirrel!" You know, it's those things of food and ...

In part it was based on this idea, what I was talking about earlier, the fantastic adventure that Carl thinks his wife really wanted, this adventure of going to the ends of the earth and seeing rare, exotic creatures that no one's ever seen before and doing these amazing things. And, of course, he realizes that what she really wanted, and what she had, and what he had as well, is this most incredible adventure of all, which is the relationship that the two of them had. And so it was kind of working backwards from that punchline that led us to these other characters and tried to weave them in in a way that supports that theme.

You based Russell on one of the animators at Pixar?

Docter: Yeah. ... Pete Sohn. He's just such an entertaining guy that we thought, "OK, when you're looking to create memorable characters, ... if you can climb a couple stairs on your way up by basing it on someone that you know or whatever, that's a great head start." And he's definitely a character.

And Jordan Nagai, who voices Russell, was only 7 when he did the role?

Rivera: Yeah, we were actually worried about that, that his voice might change.

Was it hard for a kid to focus for however many takes?

Rivera: It took a lot of sessions. ... And credit our editor, you know. Because he's not an actor. That was one of the things that was important about Jordan, casting him. We listened to over 400 kids, a country-wide casting call, and we found, it's pretty obvious, though it took us 400 kids to get through, that kids that were actors weren't, didn't feel right. They were too good, almost too polished. And this was just a regular kid. We just wanted that regular kid. But often, you said, reminded you of a kid growing up. We hope we hear that a lot, because we really want it to feel that way.