UPDATED: Behind the scenes of the new Nightmare on Elm Street

During production, movies are often shrouded in secrecy; filmmakers and studios spare no effort and, especially, no expense making sure that audiences are surprised by the twists and turns in their work, if not their by very existence.

Yes, it turns out if you die in a dream, you could die in real life. No one tell Freddy.
Psycho, Scream, and more: The true stories behind 17 terrifying horror movies

But the makers of the newly reborn A Nightmare on Elm Street are eager to share the movie with fans and invited a small group of reporters, including SCI FI Wire, to the film's Chicago set last month, where director Samuel Bayer is mounting his remake of the iconic horror film.

Imagine the shock of seeing a lit marquee directing passersby into Chicago Studio City with the words "Now Filming A Nightmare on Elm Street" beneath it as SCI FI Wire and a small coterie of journalists arrive at the soundstages.

The film's producers, Platinum Dunes' Brad Fuller and Andrew Form, have earned the right to champion their work: they not only successfully relaunched the Texas Chainsaw Massacre franchise, but also gave momentum to the trend of remaking classic horror films, culminating in their blockbuster version of Friday the 13th this year, which itself is scheduled for a sequel.

Once we arrived at the set, there were few other indicators that the filmmakers were interested in broadcasting the existence of A Nightmare on Elm Street; notwithstanding the sign outside, building entries were either locked or carefully guarded, and it took some navigating to find the actual sets once we were granted access. That said, anyone within 50 miles of our group could have probably detected our collective trembles of excitement at the prospect of being in close proximity to the creators of one of the most highly anticipated horror films of 2010.

We viewed Chicago soundstages housing Nightmare's sets, some of which had already been broken down while others were yet to be built, including key destinations for the film's doomed characters: a linoleum-floored classroom straight out of a 1970s high school, directly adjacent to a replica of the same set that was dressed in dirt and debris for a scene in Freddy's dream world. (We were informed that the duplicate set was designed to be flooded for one of the dream sequences and were encouraged to investigate the space for ourselves.)

We also saw a cavern that more closely resembled the interior of Freddy's charred skull than any sort of serious geological space; and a narrow tunnel through which Freddy was scheduled to chase one of his victims later that evening (more on that later).

We spoke with Fuller and Form for almost an hour about reinventing Freddy Krueger and the franchise as a whole for a new generation of fans. The duo was quick to point out that this would be a re-imagining that will remain more faithful to the series' dark origins than the wisecracking Freddy that people have come to expect based on the franchise's sequels.

"We've never been attracted to a jokey antagonist because it feels less scary and less real," Fuller said. "As you guys will see tonight, Freddie Krueger looks very different. He looks like a real burn victim, and that's what's important to us. And he's not witty. He's a f--ked-up guy." 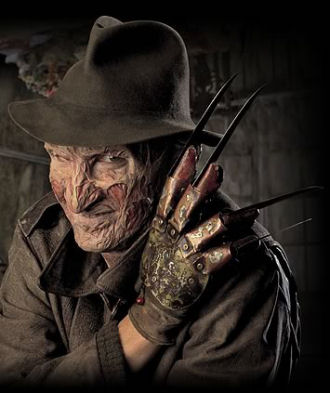 Later, we visit the makeup truck where star Jackie Earle Haley is being transformed into a new version of Freddy. Haley was about 45 minutes into the two- to three-hour process of getting into Freddy Krueger's charred countenance, and because of the constraints of his latex prosthetics, he had less to say about the character at the time than makeup artist Andrew Clement. Seeing Haley in the intermediate stages of being transformed into Freddy was itself a fairly euphoric experience. And we got to hold Freddy's infamous razor glove, a highlight of the visit.

In another part of the studio, property master Billy Dambra sat down with us for 30 minutes or so, answering questions about the construction and design of the glove. We got to examine the camera-ready gauntlet, passing it around from one journalist to the next, hoping it would fit our hand the best.

We watched a bit of filming, in which star Katie Cassidy (Taken and TV's Harper's Island) crawls through a small tunnel as crew members pour dirt and muck on top of her head. After several takes, Bayer was satisfied. Fuller apologized to Cassidy, thanking her for being such a trouper as she left the set to clean herself up.

In the scene, Freddy is supposed to chase her, but Haley proved to be slightly too big to actually follow her down the tunnel. After a few takes during which his signature fedora kept getting knocked off, the filmmakers regrouped to determine the best way to stage and shoot the scene. Thankfully, this provided enough time for Haley to speak to us for a few minutes.

Unlike many men who play monsters in masks, Haley is a trained actor first and an Oscar nominee (for 2006's Little Children) to boot. Playing Freddy enabled him to sympathize with his Watchmen co-star Jeffrey Dean Morgan, who similarly had to play a cold-blooded killer. "You know nobody really warned me about what to expect," Haley said. "I mean, my biggest experience with this is just sympathizing more and more with Jeffrey Dean. He says it's like, 'No, I'm living it.' He said he'd come out of that trailer as the Comedian, just ready to f--king kill somebody."

The extreme discomfort of the Freddy makeup proved to be an unexpected benefit in playing the role. "It's like the best Freddy research and motivation s--t I could do," Haley said. "Sit in that torturous chair for 3-1/2 hours. [After that,] I'm pretty ready to throw the glove on and start slicing just about anybody."

At the end, the tunnel problems notwithstanding, what we'd seen was amazing. By all accounts, Fuller, Form and Bayer are bringing Freddy back to life in brilliant form. A Nightmare on Elm Street will be previewed at Comic-Con International in San Diego this week. The movie is slated to open April 16, 2010.