V producer on who might return and other homages

Scott Peters, executive producer of ABC's upcoming V series, confirmed that producers have spoken with Jane Badler, the actress who memorably played the evil alien leader Diana in Kenneth Johnson's original V miniseries, on which the new show is based, about possibly playing a role in the new series.

"Jane Badler has approached our producers and has been in touch here and there," Peters (The 4400) said in an exclusive interview over the weekend at the Television Critics Association summer press tour in Pasadena, Calif.

Badler is one of the original cast members whom the producers are considering putting in the new show as an homage and tip of the hat, Peters said. "And I haven't had a chance to actually sit down or talk to anybody face to face, but I would love to," Peters said about the original stars, who include Marc Singer and Faye Grant. "And as we move forward in the writers' room, ... we're just getting up on our ... feet. We start shooting Monday [Aug. 10], and so once we sort of get that first one under our belts, I think we'll be able to take a bit of a sigh of relief and really sort of look a little bit more broad stroke, a little bit more big picture. ... I don't want somebody to just walk by in the background and then feature them for a second. ... I want to find a really interesting role for somebody." 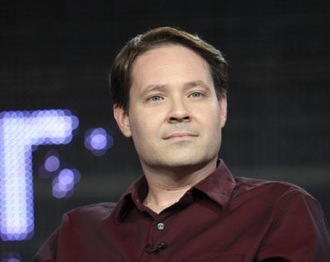 That might include role that are 180 degrees different from the parts they played in the 1983 miniseries. "Yeah," Peters said. "I mean, just somebody who can come in, and ... it's either a really ironic role for them, based on what their old role was, or just something really fun or interesting. I want them to have fun doing it. I want the fans to be excited about it. And I think it's just a fun thing to be able to tip your hat to the old show."

The new V is a re-imagining of the original miniseries, about the world's first encounter with an alien race, in which the aliens call themselves the Visitors and have a seemingly friendly agenda that may or may not be a cover for something more malevolent. The new show stars Elizabeth Mitchell as Erica Evans, Morris Chestnut as Ryan Nichols, Joel Gretsch as Father Jack Landry, Lourdes Benedicto as Valerie Stevens, Logan Huffman as Tyler Evans and Laura Vandervoort as Lisa, with Morena Baccarin as Anna and Scott Wolf as Chad Decker.

Peters also promised that the new series will nod to the original in other ways as well, though it tells a new story in the present day with new characters and new situations. (Possible spoilers ahead!)

"Whenever we would audition actors or bring writers in to ... interviews, ... we would ask, 'What do you remember of the show? What's like the big [thing]?' And the big things were the huge ships, the red uniforms, ... eating the hamster and [the] alien baby. You know, universally, that was what everyone came up with. It was like our top four or five. So definitely, we are well aware of those moments and looking to put our own little spin on them to tip our hat to the old audience."

What about the famous reveal of the Visitor's face ripped away to reveal that lizard countenance?

"That was the other one, of course," he said, adding: "We tried to put our own [spin on it]. We're ... a little bit different than their execution of it. It wasn't so much latex mask as it is real flesh and blood."