TV THIS WEEK: Peter faces Walternate on Fringe, The Fades and more!

Sci-fi TV is back in action as Peter travels Over There on the return of Fringe, Nicholas Lea goes all Eliot Ness on Supernatural, and The Fades premieres on BBC America.

Also, Charisma Carpenter pops up on The Lying Game, Erica Durance sports a Wonder Woman outfit on Harry's Law, Ghost Hunters returns for an eighth season, Face Off heads to Oz on the show's second premiere, Caroline turns 18 on The Vampire Diaries, Faye taps into her dark side on The Secret Circle, Carter joins the team on Person of Interest, Bo Derek kisses Morgan on Chuck, an ogre has issues on Grimm, Lancelot tries to save Merlin on Merlin, the animated Blade premieres, Syfy explores what happens when worlds collide in Collision Earth, and Hansel and Gretel get the Once Upon a Time treatment.

Here's what we have to look forward to this week on sci-fi, fantasy, paranormal and spy-fi TV, and a look at non-sci-fi shows that feature sci-fi stars or subject matter.

Charisma Carpenter alert! We just can't pass up an opportunity to mark our calendars when Buffy and Angel's Cordelia shows up. Carpenter joins the cast of The Lying Game as Rebecca "Annie" Sewell, Char's mysterious and long-absent aunt. 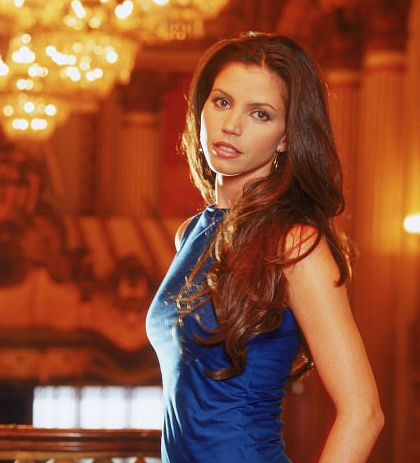 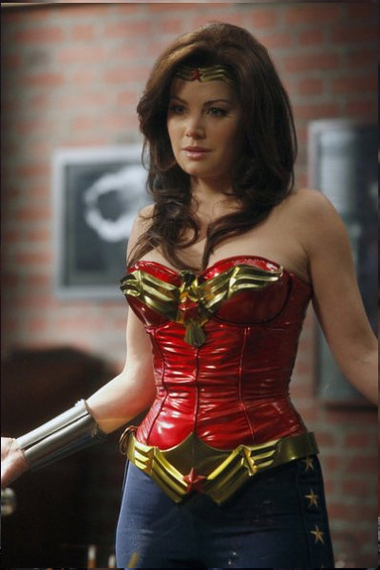 Season eight premiere! TAPS is back to investigate Kings Island amusement park in Ohio, which is reported to be haunted by the spirit of a girl. The team also heads to New Hampshire to help a family who believe they have a ghost problem.

Season two premiere! They're off to see the Wizard as 14 aspiring makeup artists begin the reality competition by attempting to re-imagine the iconic characters from The Wonderful Wizard of Oz.

Caroline's friends plan a surprise party for her 18th birthday. What could possibly go wrong? Meanwhile, Damon and Stefan have very different opinions about how to handle Klaus, and Alaric runs into his pretty doctor again.

Last week Cassie was almost killed, so it must be time ... to call the police? ... to leave town? Nope, it's time for Adam to ask Cassie to the Fire and Ice dance. Meanwhile, Faye's being a bad girl as she tries to get back her individual magic, even if it means stealing Cassie's.

It looks like Reese and Finch are going to suck Carter into their team. Shocker! Not!

Bo Derek alert! While we'll have to wait to see if 55-year-old Bo Derek is still the perfect 10 (go look up the movie 10 if you're confused), the actress joins the gang playing herself during a mission to Vail, Colo., which deals with Morgan running into more issues for once being the Intersect. Elsewhere, Jeff and Lester continue with their own spy mission to find out what's really going on at the Buy More. Angus Macfadyen guest-stars.

Hank and Nick try to track down an escaped fugitive with an ax to grind against Hank, and Nick quickly begins to suspect that he might be a monster.

When Fringe finally ends—if it ends well—we may look back and realize it was perhaps the best sci-fi television series ever. There's been plenty of discussion today about the possible cancellation of Fringe because Fox is losing money by airing it. So if you're a Fringe fan, dig in and enjoy what's left of this amazing series. One way or another, either being canceled this year or being given a few episodes a la Chuck, its days are certainly numbered.

As for this episode, it looks like another great mythology story which has Peter making a dangerous journey to the alt-verse to have a chat with Walternate. Meanwhile, Olivia is paid a visit by the Observer, and he has an ominous message for her.

Conclusion to the two-part season-four premiere! After throwing himself in front of a Dorocha to save Arthur, lucky Merlin's only mostly dead. As Lancelot tries to get him back to Camelot so Gaius can save him, strange creatures called Vilia delay their journey. Meanwhile, Arthur continues his efforts to sacrifice himself to stop the Dorocha.

Series premiere! This anime series from Marvel follows the Day Walker as he tracks Deacon Frost to Asia.

On CBS's A Gifted Man (8 p.m.), Michael and E-Mo have conflicting opinions about treating a patient with a brain tumor in "In Case of (Re)Birth." And in The CW's Nikita (8 p.m.), Percy issues a threat to take down Division if Amanda doesn't release him in "Sanctuary."

Series premiere! A teenage boy who is haunted by apocalyptic visions and the dead learns that he might not be crazy after all when he meets a social outcast who explains his visions.

In this Syfy Saturday-night original movie, a solar event throws Mercury out of its orbit on a collision course with Earth. Luckily, a discredited scientist's weapon of mass destruction might just save the day. Fringe's Kirk Acevedo, Jessica Parker Kennedy (The Secret Circle) and Diane Farr star.

It's Hansel and Gretel time as Emma tries to help a homeless brother and sister and keep them from being separated in a foster home in our world, and the Evil Queen coerces Hansel and Gretel into trying to steal from a blind witch in the fairytale world.

On Animal Planet's Finding Bigfoot (10 p.m.), the team of Bigfoot hunters head to Minnesota for an investigation in "Peeping Bigfoot."