Oh, don't be so small-minded. Dating out of your league is one thing, but wading out of your gene pool and into the arms of another species—assuming they even have arms—now that's something special. Take these 12 examples, counting down to the most romantic.

5 human/monster sex scenes that take The Shape of Water to the next level
Stupid sexy monsters: why we like beastly romances

12. Enemy Mine (alien/human) Dennis Quaid and Louis Gossett Jr. play marooned enemies on a distant, barren planet. At first they're at odds—but then something odd happens when they come to the realization that they're sort of a futuristic Adam and Eve. You just get used to the idea of hermaphroditic reptilian reproduction, and then Quaid starts knitting booties.

11. The Fly (mutant/human) Talk about a buzz-kill. ... Imagine his girlfriend's dismay when sexy scientist Dr. Seth Brundle (Jeff Goldbum in the oozy 1986 version) goes from geek-chic to winged creep after he accidentally melds his DNA with that of a common housefly. This pairing starts out hot and sexy but quickly descends into insect-repellent.

10. Howard the Duck (duck/human) Insert your own inappropriate movie-title limerick here, then prepare yourself for the egg laid by leading lady Leah Thompson and several actors stuffed into a bizarre bird suit. From the trashy trailer: "Favorite pastimes: Cigars and Sex!" You see the stogies, but thankfully, a la The Rocky Horror Picture Show, the fowl love scenes play out in silhouette.

9. Galaxy Quest (alien/human) She's no Galaxina—Laliari (Missi Pyle) is cute, but she's not exactly as advertised. Usually it's just hair rollers and mudpacks when your girl shows you her true colors. But imagine what happens when she lets her tentacles down in the throes of interplanetary passion. Look at it this way: More arms to embrace.

8. The Incredible Hulk (mutant/human) When it was a clunky '70s TV series with 6-foot-4-inch Lou Ferrigno as the Hulk, this story about a girl and her angry green giant was kind of cute. But in the 2008 movie version, when Ed Norton becomes an Everest-sized love machine, the thought of him and Jennifer Connelly Liv Tyler getting cuddly becomes downright twisted. An abomination, you might say.

7. The Fifth Element (genetically altered life form/human) Leeloo's got orange hair, doesn't speak English, doesn't wear a lot of clothes, has supermodel good looks, kicks butt and likes sex. What's not to love? After watching this futuristic dystopia as imagined by Luc Besson and starring Bruce Willis as the lucky everyman who falls for her, it's clear the Fifth Element is love. 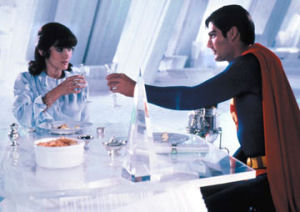 6. Superman (superhuman alien/human) "You've got me? Who's got you?" squeaks Lois Lane (Margot Kidder) to Superman (Christopher Reeves) midair in the seminal '70s big screen version of the DC Comic as she literally falls for the muscly man from Krypton. A chaste romance begins, with chemistry so strong even Kryptonite couldn't bust the bond. (And we know they didn't hook up until Superman II, which is where the picture above is from.)

5. Star Trek: The Motion Picture (bald alien-turned-robot/human) Robert Wise's 1979 feature film, the first in the franchise, introduced two new characters: the hot, bald Deltan named Ilia (Persis Khambatta) and the hot-headed new captain, Willard Decker (7th Heaven's Stephen Collins), who have a hot romantic relationship until a miles-long sentient alien ship called V'ger transforms Ilia into a cold robot. Decker chases after her like wounded puppy until he's given the chance to meld with Ilia/V'ger in a blast of light to save the Earth. That's hot.

4. King Kong (giant ape/human) Pick a version. Any version. From the 1930s to the 2000s, this giant gorilla is bananas over blondes: The story follows colossal King Kong, aka the Eighth Wonder of the World, in his quest to woo flapper Ann Darrow. Crammed with enough innuendo to make Freud's head spin, this bi-curious George—biplanes and phallic buildings abound—and his screaming playmate nevertheless embody the essence of interspecies love. 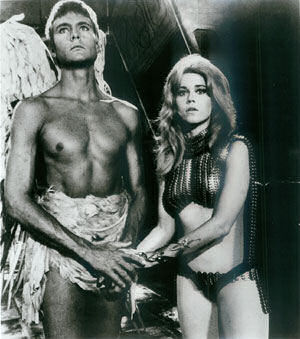 3. Barbarella (human/angel) With their out-of-this-world good looks, Jane Fonda and John Phillip Law are the queen and king of the interplanetary prom. She's an explorer without many clothing options, and he's the cherub who takes her to a romantic, tantric cloud nine. It's heavenly.

2. Splash (mermaid/human) Ten years before he dove into Bubba Gump's Shrimp, Tom Hanks played Allen Bauer, a man deep-end in love with a mermaid. A luminous Daryl Hannah was the flirtatious fish-female, and the reason this pairing is romantic is that it harks back to the quaint old fairy tale by Hans Christian Andersen. So sweet it needs lemon. And maybe a little tartar sauce.

1. Starman (alien/human) The starry-eyed pairing of Karen Allen and Jeff Bridges as a widow and an uncanny alien who slip on a government conspiracy and fall in love. It's Romeo and Juliet as directed by horrormeister John Carpenter, and guess what? This unexpected little ball of sweet schmaltz is truly romantic.