V's new Diana tells us: Will she eat a guinea pig?

Firefly babe Morena Baccarin stars in ABC's upcoming reboot of the alien-invasion miniseries V as the leader of the so-called Visitors, whose name is Anna.

Baccarin wants to make sure you know she's not the same character as Diana, the guinea-pig-munching bitch queen of the original 1983 miniseries, who was memorably played with campy relish by Jane Badler.

Greenland is a good disaster movie, but as the stars agree, not exactly a 'fun' one
V's sexy Laura Vandervoort gets naked again

Likewise, this V isn't your parents' V, but a "re-imagining" of the old sci-fi miniseries that inspired a second miniseries, a weekly show, a book and 25 years of pent-up demand for another series.

"It completely re-invents the material, actually," Baccarin told us in an exclusive interview last week. "It's a re-imagining of the old one, so it's the same concept. Aliens come down from space. You have the conflict between them and humans. Why are they here? The show in the '80s was more about communism and totalitarianism, and our show plays a little bit more with the terrorist aspect, which is more the reality of the world we're living in now. And the characters are different. I'm not Diana. I play Anna."

The Visitors arrive on Earth proclaiming their desire to befriend mankind, but really want to eat us.

Though Anna's not Diana, she shares certain characteristics. She's got a skin of gorgeousness masking a reptilian body. But unlike Diana, Anna speaks—publicly anyway—in a calm, reassuring voice that hides her true intentions. Anna is entrancing enough to pull the wool over the eyes over countless people, including a TV reporter (Scott Wolf) and the impressionable son (Logan Huffman) of an FBI counter-terrorism agent (Elizabeth Mitchell). 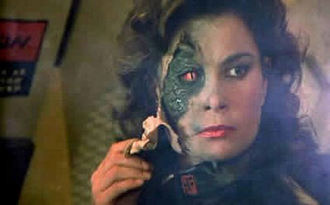 "Anna is somebody who is extremely ambitious and will do whatever needs to be done to secure the continuation of her species," Baccarin said. "So she's come down to Earth, and she's going to do whatever it takes to get people to trust her and to listen to her, so that she can get what she wants. So I'd say she's a very motivated alien."

"She knows exactly what to say, what to do," Baccarin concurred. "The aliens seem to play off of what they think human beings want and what they think human beings gravitate toward, like healthcare and peace. There's a line in the pilot about the aliens acting more human than humans, and that's how Anna and her people are going to get what they want, by enacting that, by giving humans what they want and taking advantage of that."

That all sounds great, but what everyone really wants to know is if Anna will chow down on a guinea pig. Fans of V classic vividly remember the squirm-inducing bit in which Diana snacked on a guinea pig, swallowing the sucker in a single gulp.

"Not yet," Baccarin said, laughing. "The writers keep saying that 'We're paying homage to the hallmark moments,' and I don't really know what that means yet. I don't know if that means I have to become very friendly with a [guinea pig]."

The new V isn't without its controversies. There are rumors that production shut down for a time. ABC is breaking its episode order into four-episode pods. Baccarin said that whatever is happening behind the scenes isn't affecting the day-to-day.

"We are kept as in the dark as [the public] is," Baccarin said. "I think that they just want to protect us as much as possible."