We know that under the human skin of V's alien visitors lurks a scaly lizard body, but they sure look pretty on the outside, and Laura Vandervoort—who plays the smokin' hot alien princess Lisa—promises we'll see a bit more of her human skin in upcoming episodes.

So far the show has treated viewers to plenty of shots of Vandervoort wearing very little in her scenes with Tyler (Logan Huffman). (Spoilers ahead!)

"Those aren't really the most exciting things to film, especially leading up to it," Vandervoort joked in an exclusive phone interview last week. "But, in the next episode, yes, I unfortunately—I don't know, fortunately?—will be down to my skivvies again. But this time it's for a different purpose."

This week's episode of the ABC series will finally reveal whose side Lisa is really on, she added. In recent weeks she's been luring Tyler onto the mothership's "live aboard" program, so that her mother—the evil alien queen Anna (Morena Baccarin)—can use him for some as-yet-unrevealed but undoubtedly nefarious purpose. It seems like Lisa's genuinely falling for the dorky kid.

Here's the official description of the episode, called "Fruition":

"Fruition"—After a violent attack on someone very close to Anna, she delivers a message that the Vs don't feel safe and will be leaving; and Anna also gives a list of possible Fifth Column members to Chad, hoping he'll investigate to help in finding them. Meanwhile, Erica and the team try to track down a scientist who may have created a weapon that the Visitors are afraid of, on "V," TUESDAY, MAY 11 (10:02-11:00 p.m., ET), on ABC.

"I have to say, by the next episode it's going to be clear to the audience what side I've chosen," Vandervoort said. "So you have to wait and see. I know at least at the beginning you didn't know whether or not I was evil as well, like my mother. Then it started to change a little bit, but since the blow from my mother, I don't know if that scared Lisa enough to just forget her feelings for Tyler altogether or not."

"There's quite a few things that she's trying to hide, and she's juggling a few tasks at the same time," Vandervoort said. "Protecting Tyler is kind of her main goal right now, because she is, from what the audience has seen, truly in love. At the same time, her mother is a very powerful person, especially in their race, and she needs to be careful not to upset her, because she is next in line for queen. Without her there is no future queen, so she also has to watch her people's back as well. If her mother chose to destroy her, then her race wouldn't have a future."

The next time we see Vandervoort, she might be in a wheelchair. Last week's episode ended with Anna slapping Lisa in the face and ordering her soldiers to break Lisa's legs. She's going to blame it on the Fifth Column and make them look like the terrorists. Vandervoort's not telling how badly she'll be injured when she appears next.

"Well, she did say, 'Break her legs,'" she said. "So if her soldiers follow through with that, then I definitely can't move them." 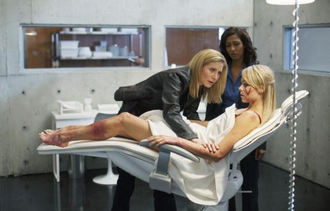 A few weeks back, Lisa failed Anna's empathy test, but Anna reported that she passed. It could be that Anna knows her daughter has developed human emotions and she's playing it cool herself.

"I asked [the producers], and it's kind of unclear, but I believe she has an inkling," Vandervoort said. "She slaps Lisa to blame it on the Fifth Column, to say, 'They're terrorists, they're attacking my daughter.' It's also to lure Tyler back to the ship after I broke up with Tyler. So she uses me as a pawn in that way, but I also think it was a way for her to get back a little bit at me in case I am lying to her. She knows she can't kill me like the others because I am next in line, but she can abuse me and use me."

Whether she decides to do what Anna says or to keep Tyler safe, Lisa will have to confront his mother, Erica (Elizabeth Mitchell) again. "In the next episode, I get to have some great scenes with Elizabeth. I enjoy that. I worked with Logan a lot and we have fun, but it's always nice to work with actors you haven't yet. That's the great part about our show. We have such a large cast that it's going to take into the second season for me to actually have a scene with everybody. The stories have to intertwine at some point."

By the end of this season, Anna's plan will reach a point of no return. The season finale will suggest a new direction for the show, should V come back for a second season. "There's a great season finale coming up for the show in general," Vandervoort said. "There's a turn of events that affects every single character. It affects all of us directly, but there's no one specific character that the big finale focuses on. It's really on everything coming together and where Anna chooses to take the show."

It's a cliffhanger that will let fans sweat throughout the summer hiatus. "Of course, it's V," Vandervoort said. "Every episode there's a cliffhanger, so for our finale episode, it's a huge cliffhanger. It even left us, the actors, asking the producers, 'Well, what does that mean? What happened?' So there is something that's going to make everyone go, 'Oh, my God, I can't wait till next year to watch the rest of this.'"

ABC has not officially decided whether it will renew V for the fall. "I know we're all waiting in anticipation to hear if there's going to be a second season," Vandervoort said. "I know all the actors believe there will be because we feel strongly about the show. I'm not sure how they go about deciding on a second season and who decides at the network. I don't know if it's a numbers game or what, but I know the fans love our show, and I hope, for them and for us, it does come back."