Wait, that's not the Iron Patriot in Iron Man 3 after all!

Remember those sensational leaked photos that came out of the Iron Man 3 set last week, showing what appeared to be the Iron Patriot armor? Well, let's all take a deep breath ... seems that it's not the Iron Patriot after all. So who is it supposed to be?

According to Latino Review, the armor in question is actually that of War Machine, aka Tony Stark's best friend James Rhodes (Don Cheadle). Apparently, since the U.S. military has had possession of this suit for some time now (thanks to Rhodey bringing it in in Iron Man 2), they've decided to give the armor a patriotic new coat of paint just for that extra shot of national pride.

But wait a minute, you cry, what about the other photo that showed a guy who wasn't Don Cheadle wearing the suit? Wasn't that actor James Badge Dale, who's supposed to be playing some variation on Coldblood?

Wrong, says Latino Review's source. That guy snapped in the suit is just a stunt man. Since he happened to be white, and not black, the news quickly spread that it must be James Badge Dale in the suit.

Of course, none of this is officially confirmed. We're lucky that Marvel has actually confirmed that it started shooting Iron Man 3. But to repeat, someone on the set has said that this star-spangled gear is not Iron Patriot at all, just good old War Machine.

We're just waiting to see if Pepper Potts (Gwyneth Paltrow) shows up in her Rescue armor ... 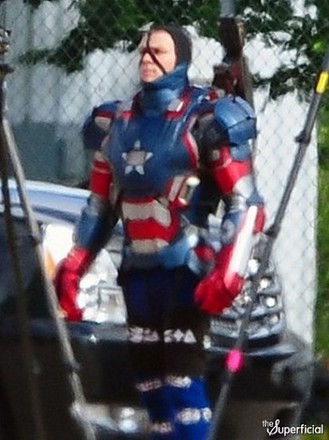