Hot on the hellish heels of the new Evil Dead trailer comes this close-up sniff of the Book of the Dead from next year's reboot. A few changes were made to the notorious bad boy, but it's still one nasty little volume.

The lore of the Necronomicon goes back to H.P. Lovecraft's short story from 1924, "The Hound." It was a fictional magic manuscript bound in human skin used to summon a motley crew of elder demons called the Old Ones. In Sam Raimi's 1981 version of The Evil Dead, it became the catalyst to call forth all manner of bloody supernatural mayhem. For the remake, director Fede Alvarez has opted for a more surgical, stitched-together design rather than the cartoonish monster-faced cover of the original.

Which one do you prefer?

Have a look at the two books together and stop chanting that Latin phrase. 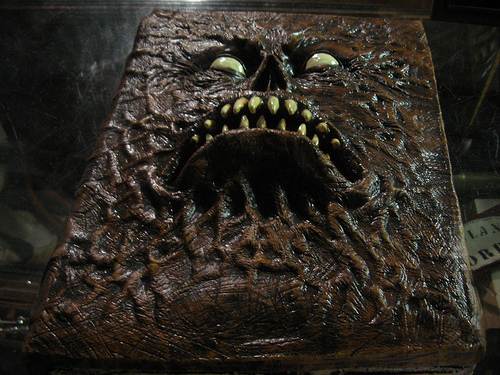