Getting Warehouse 13 stars Eddie McClintock, Saul Rubinek and Allison Scagliotti on the phone together confirms one thing—working on the set of Syfy's Warehouse 13 must be a blast. The castmates talk in a playful, free-flowing way about what's ahead on the new third season, which follows a group of Warehouse agents who try to snag, bag and tag misbehaving artifacts.

The Warehouse 13 stars chatted about something called schmacting, about the writers getting bizarre on them and about Claudia's secret talent.

Without getting too spoilery, here's what we have to look forward to with Artie, Pete and Claudia

"I was planning to spoil everything, but if you don't want to, okay. All right," said Rubinek, who plays the man who runs the Warehouse, Artie Nielsen. His character also bakes cookies occasionally.

"We're trying to give the fans more of what they already like," he added. "It's really unpredictable, and it continues to be that way for my character, certainly. I think that you get to find out how Artie fits into the Warehouse hierarchy with a little bit more depth. As writers of the show, they've allowed the show to explore the mythology and the Regents by putting life-and-death situations into the hierarchy of how the Warehouse operates ... [and] Artie's love life is explored in a little bit more depth, and ruefully and funnily."

We're guessing the love-life part might have something to do with the return of Lindsay Wagner as the pretty doctor Artie's fallen for. "I can tell you that Artie is trying to—with the help of Claudia and the egging on of Pete—he's slowly trying to step forward to try to have the kind of relationship he never had and is wondering whether he'll be accepted or rejected. But there's something about her past that he doesn't expect, and that's as far as I can go."

When it comes to Claudia Donovan, her arc has "always mirrored my personal arc," said Scagliotti, who plays the techie genius. "This season she finally got a peer in the Warehouse in the Steve Jinks character, and they develop a really close, great friendship, almost brother-sister dynamic. Claudia is contributing in the technical field as always, building Tesla grenades and periscopes in the Warehouse and whatnot. But more than anything, she just is figuring out what it means to be a part of the team, which I'm figuring out along the way. What does it mean to be part of this team that makes a television show every week?"

We'll also discover that both Scagliotti and Claudia have a talent. Claudia will do "open mic, which I do a couple of times this season. She's going to spend time on herself, because that's what a 20-year-old needs to do. I hope my family just read that," she said.

"Allison has turned into this great performer," said Rubinek. "She's got a beautiful singing voice. You're going to get a real treat in season three when she performs on open mic. I'm not going to give away what the song is and stuff, but it's a really cool thing that the writers have allowed her to do only because she's really developed. She's really worked hard on her craft as a musician and as a performer, and that's going to be part of her character." 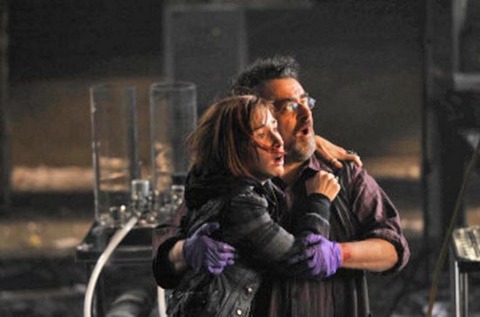 When it comes to the writers, it's Bizarro Artie and more mythology

During season three, the writers have begun to dig into the characters in a way they couldn't earlier in the series, said Rubinek. Now "we can go off character a little bit. We all get a chance to be kind of bizarre versions of ourselves in some way or another. Certainly I do, because of artifact-related incidents."

We'll also get a new villain, but this time it will be something completely different. "Every season has an overriding villain. In the first season it was MacPherson, the second season H.G. Wells, and this season also has an aspect of that that I can't give away, and the combination from the past as well," he added.

This season the writers will explore "the mythology and the past of the Warehouse, and that's what's really cool, is that they've deepened the show," he said. "I was so thrilled in the second season that they were doing this, and then the third season they've continued it. It's wonderful that our season closer last season had to do with the lost warehouse in Egypt, and that they really went into it, really explored it designwise and storywise."

The season will be a "continuation and a deepening, and an even more entertaining season than we've ever done before. One specific element that we'll learn more about are the Regents," said Rubinek. "There is an aspect to their past that creates great jeopardy for the Warehouse and for them. I can tell you that much. The writers have gotten further into their responsibilities and how they operate with each other, and also in relationship to us." 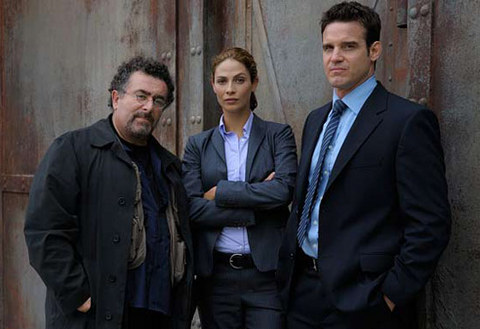 On their new guy, Steve Jinks, and the schmacting of it all

When Aaron Ashmore joined the cast of Warehouse 13 as Steve Jinks this season, he faced no small task, according to Rubinek. "In order to do our show, you have to be deft. You have to be able to cross quickly from doing melodrama to action. We call it schmacting, facting and acting. Schmacting in front of a green screen. Facting is exposition. Acting, you've got to be able to do melodrama, thriller, comedy. You've got to do sentimental stuff, tragedy. You've got to jump usually, not just from one episode or one scene, but sometimes from one line to the next. There's going to be a joke that you got to get away with some wit. And that's basically our show."

Scagliotti added that not only can Aaron handle working on the show, "he's great at it. He fills up the three tenets of working in Warehouse 13, which are acting, schmacting and facting."

"He's very Zen, and it's a lot like Aaron himself," said McClintock. "And so he brings, like in relation to Pete, he's the calming force to Pete. Whereas where Myka was a little more rigid, he's calming in a completely different way. He's just more laid back and relaxed, and I think he brings a real freshness. ... He takes a show that didn't really need freshening up and makes it even that much more enjoyable." 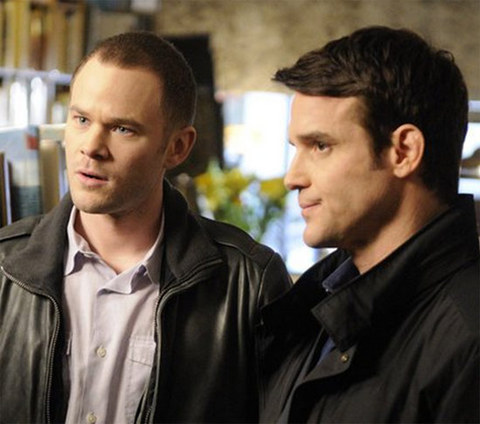 Regarding Fargo, Tron and Artie's bedroom ...

Scagliotti's favorite episode coming up features the return of Eureka's Neil Grayston, who plays Fargo, in an episode called "Don't Hate the Player." "This episode has everything. It's probably our most absurd, to date, I think, in the history of Warehouse. It's sort of a Tron meets Dungeons & Dragons episode with an amazing guest cast. [Plus we all] get to do crazy things and play heightened versions of ourselves, and also very different versions of ourselves."

McClintock admitted one of his favorites was an episode called "Love Sick," "where I had to play being drunk and for quite a bit of it," he said. "But it was really challenging for me to walk the line between someone playing drunk and someone who actually looks the part."

As for Rubinek, "that episode, 'Love Sick,' was one of my favorites too, and the other one too that you mentioned, 'Don't Hate the Player.' I got to play Artie as if he were doing a Monty Python movie. It was an offshoot of Artie. And in 'Love Sick,' Artie's bedroom is introduced, and it's an extraordinary set. It gets used a couple of times during the season." Really? Artie's bedroom and Lindsay Wagner. Hummm.

The writers are "allowing themselves to explore this world as if it really existed and looking at the intricacies of it. That's really fun for fans. It's fun for us," said Rubinek. The scripts are "page-turners for us. We're all delighted. We're laughing. There are surprises all the time."

Are you ready for Bizarro Artie?