Was Sanctuary's Ashley killed off? Should she be?

Is Sanctuary's Ashley dead? After being transformed into Super Abnormal Ashley (Emilie Ullerup) by that nasty Cabal and leading an attack, she vanished in a fiery blaze on Syfy's supernatural series last Friday, rather than kill her own mum, Dr. Helen Magnus (Amanda Tapping).

While it's not much of a surprise that Ashley couldn't kill Magnus (which would have led to an abrupt end of the series, what with Magnus being the main character and all), whether Ashley will live or die isn't as easy to conclude.

After all, they just added another hip, hot girl character named Kate Freelander, played by Agam Darshi. Could she be Ashley's replacement? And, of course, the death of Ashley means kick-ass blonde Ullerup would be leaving the series.

"The fate of Ashley will be determined in the first three episodes," promised creator and executive producer Damian Kindler. "It gets really intense. It gets dark. We're not afraid to get very emotional in the way the characters interact. That's one of the signatures of Sanctuary."

The third episode in the arc, "Eulogy," airs tonight on Syfy at 10 p.m. ET with Magnus searching for her daughter, who she believes is still alive, while Druitt (Christopher Heyerdahl) thinks she's dead and seeks revenge against the Cabal.

We won't have to wait long to learn if Ashley survives the Cabal's devious plan, which morphed her into a vampirey teleportation sort of super-Abnormal super-soldier with glowing red eyes and big claws. Beyond the claws and eyes and stuff, we knew it wasn't our Ashley because her hair was pulled back and she sneered and moved really fast unless Magnus was around. Of course she was still dressed in slick black and, I've been told, looked smoking hot.

Here's a few reasons to kill her off and some to let her live:

Kill off Ashley because it adds drama. God knows Magnus needs to be miserable. She fell in love with Jack the Ripper, after all. And then, instead of choosing Einstein or some other cool historical figure as the father of her child, she chose ... Jack the Ripper. That's a heartbreak waiting to happen.

Let Ashley live because she's fun and adds some light to the very dark world of Sanctuary. Unlike all the other characters, Ashley is totally happy with who she is. She enjoys her job. She has a love/hate relationship with her mother but doesn't let that get her down, and she gets to kick butt on a regular basis. She's blond, and I've been told she's smoking hot.

Kill Ashley off because the mother/daughter drama is silly. After, like, 135 years or so, Magnus has test-tube baby Ashley and then raises her to be the Sanctuary enforcer. So then Magnus is surprised that Jack the Ripper's daughter, who she's raised to totally kick ass, is going to be rebellious?

Let Ashley live because Magnus isn't much of a mother. Tapping did a stunning job when it came to this particular three-episode arc. For the first time I bought Magnus as a mother, so maybe the mother/daughter drama of the first season will evolve into something interesting through the second. 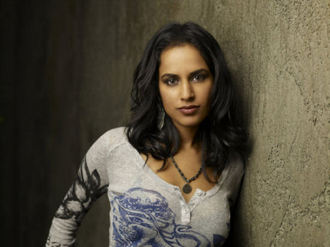 Kill Ashley off because Kate Freelander joined the team. She doesn't kick butt like Ashley, but she's good with a quip and, I've been told, she's also smoking hot. Kate's a bit of a bad girl, and she's not afraid to take on Magnus. And as a con woman, or maybe a former con woman, she's an asset to the team, so they won't need Ashley's Rambo mentality to get the job done. Beyond that, Ashley and Will have no romantic chemistry together. Kate and Will have potential.

Let Ashley live because Kate and Ashley would clash nicely. They'd also work well together. Two quippy hot ladies who have nothing in common could eventually be a force to be reckoned with. And, if nothing else, I've been told, two smoking hot ladies are better than one.

So thumbs up or thumbs down? Should she live or die? What do you think?