Fantasy met reality in San Francisco last night when Alan Bradley, the new executive consultant at Encom Corp., appeared on the Embarcadero at an elaborate press event to announce a new online version of the company's legendary game Space Paranoids—an announcement that was disrupted by protesters arguing that former CEO Kevin Flynn (who mysteriously disappeared more than 25 years ago) was still alive. (video, below)

The event was capped by an elaborate stunt in which someone jumped from a hovering helicopter and parachuted behind the stage (we're not sure, but we think high winds may have altered the skyjumper's original destination). [Update: The jumper was supposed to be Sam Flynn, the son of Kevin Flynn (as played by Garrett Hedlund), who was jumping to highlight the disappearance of his father; check out this video on the Flynn Lives site.]

Bruce Boxleitner on TRON 3 cancellation: 'I'm done with it'
Search for the next Tron begins in new trailer from Tron Uprising

The reality is that "Alan Bradley" was played by actor Bruce Boxleitner, reprising his character from the 1982 classic sci-fi movie Tron; that he was joined in a surprise appearance by Dr. Lora Baines (a radiant Cindy Morgan); and that the entire press conference and protest was a viral promotion for Disney's upcoming 3-D sequel film Tron Legacy.

We were there, and it was awesome!

Our movement has crisscrossed the globe from London to Toronto, New York to Sydney, Chicago to Paris - but, our next meet-up is playing out right here in California... and it's going to be big.

You can't miss this - we're facing off with Encom International and taking down their press conference on April 2nd, 8pm, at the Justin Herman Plaza in San Francisco. The Flynn Lives pre-meeting will start at 6:30pm at the Hyatt Regency Grand Ballroom at 5 Embarcadero Center.

Together, we will show the world that video game creator and TRON visionary Kevin Flynn may be gone, but he's not forgotten.

For more information, go to OperationTron.com 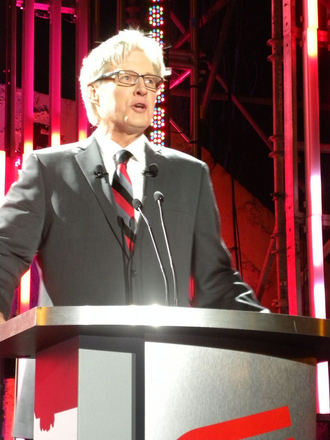 A giant group of "Flynn Lives" fans showed up and were given T-shirts and posters and told to disrupt the event with chants and cheers. It may not have been the most organized revolution, but the fans were certainly into it.

And the event? We were taken to a giant square in front of a huge screen. As a chilly wind buffeted the shivering crowd, Boxleitner took the stage and praised "Flynn" and his work on games such as the fictional Space Paranoids, first glimpsed in the '82 movie. To the delight of the crowd, he brought Morgan onstage as his wife (!); wild cheers erupted from the audience. The couple shared multiple smooches, and she stood behind him like a politician's wife, smiling and applauding his speech.

(Fans have been dying to see her do a cameo in the film, ... not sure what this says about the possibility, but we've all got our fingers crossed. But this would seem to fulfill director Joseph Kosinski's prediction that, though Lora may not be in the movie, she at least still exists in the world of Tron. Also, it suggests that Tron Legacy won't be following the mythology of the Tron 2.0 video game, in which Lora is dead.) 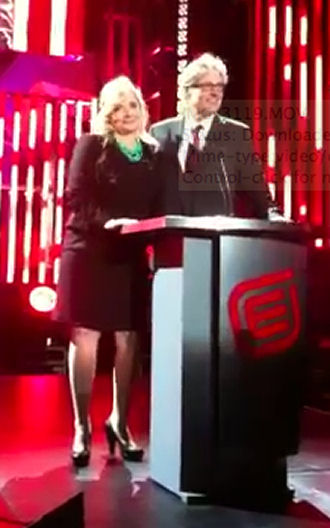 Here's some of what "Bradley" said:

"I started my career at Encom as a programmer. My head down, writing and re-writing code, and figuring out ways to stop people from stealing our games. That's what I thought I was working on ... but now, ... every minute of every day, someone on the planet uses, needs or depends on the products that we make.

"I'm proud of Encom. I'm proud of all of it. Who could have known that when Space Paranoids was a quarter-magnet all those years ago, where all this would have taken us? Remember Space Paranoids? Well, tonight, I'd like pay tribute to the one man who did know. My friend Kevin Flynn. His name should be remembered tonight as we celebrate success. ... "

And boy, oh, boy, was it. The crowd went absolutely wild whenever he said "Flynn."

"Sadly his genius is lost to us. And all we can do now is what I implore you to do now, tonight. Follow his example. We must try to do our best to fill his shoes. The only way to do that is to do what Kevin Flynn always did. Dream big! Dream big."

Bradley told the audience that Encom was honoring Flynn by creating a brand-new online version of his famous game, Space Paranoids, with 15 levels that Flynn designed himself. He never mentioned that the company was still searching for the lost genius. He also said that Flynn's code was all throughout the game. Sound like a hint?

After the speech, a group of Flynn supporters took the stage and demanded that the search continue. The posters they held were homemade, including ones that implied that the Dharma Initiative from Lost took him and referenced video-game history with an "All your base are belong to us" quote. (See video below)

At the end of it all, a helicopter circled the stage high overhead. The wind was wild, and the reporters in the press section were legitimately concerned that the man parachuting from the 'copter was going to land on one of us. He expertly managed to land behind the stage, and the screen went dark. We're fairly sure that this wasn't all that was supposed to happen, but the wind was strong enough to stop whatever was planned. (Check out the end of the video below.)

Tron: Legacy has made some pretty fantastic attempts at viral publicity, and here's hoping the film lives up to the buzz it has created. The film is set for release on Dec. 17.