If two hours and 42 minutes of Watchmen wasn't enough for you, you can enjoy about half an hour more on the upcoming director's cut DVD/Blu-ray, which is due this month, and director Zack Snyder promises that he'll personally guide you through the film's byzantine storyline, reveal secrets and bloopers and more.

"I think it'll really help you go, 'Wow, they meant all that,'" Snyder said in an exclusive interview with SCI FI Wire last week in Burbank, Calif. "I think a lot of people see movies and they think, 'Wow, that's random.' I think the truth is when you watch this, you realize that none of it's by accident."

It's on the Blu-ray that Snyder hosts Maximum Movie Mode, a behind-the-scenes feature that runs concurrent with the film and includes picture-in-picture interviews with filmmakers, comparisons of live-action scenes to graphic novel frames, a timeline comparing Watchmen history with real-world events and more.

There are 12 points in the film where Snyder steps out to illustrate points while the film runs behind him. As an example, in the opening scene—in which the Comedian (Jeffrey Dean Morgan) fights and dies—and in the final battle scene, Snyder explains exactly what Adrian Veidt's (Matthew Goode) plan is. In this way, Maximum Movie Mode also explains the film to casual audiences who may have found themselves bewildered by the complex story.

Watching the movie in this mode will take you a bit longer than simply viewing the director's cut, since Snyder occasionally pauses the film to illustrate a point. "My cut is 3:10," Snyder said. "I bet you it's 3:20 or something like that [in Maximum Movie Mode]. But a lot of it goes simultaneously; while I'm talking it continues to roll. It's pretty cool. I think, even for me, I'm like, 'Wow!'" 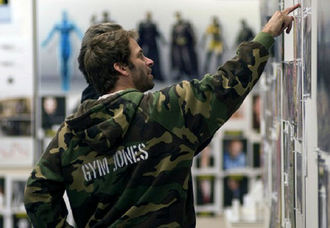 If you're wondering why Nixon is still president in the '80s, the timeline feature indicates that in "Their World," the amendment limiting presidencies to two terms was repealed in 1975. In "Our World," then-President Ford survived two assassination attempts that year.

If you're wondering why Dr. Manhattan's big blue dong is visible, Maximum Movie Mode takes you behind the scenes of his laboratory. You'll see actor Billy Crudup, fully clothed, in a suit bedazzled with blue LED lights. Crudup makes faces for the motion capture artists, and you see early Dr. Manhattan tests, before the distracting member was fully rendered.

The director's cut will also show more of Snyder himself. You clearly see him in a reflection during the Comedian's fight to the death, a snafu Snyder decided not to spend extra visual-effects money to correct. Snyder also appears intentionally in the Vietnam flashback, a director's cameo that is more prominent in the extended cut.

"Actually, my cameo in Vietnam, in my cut, you can see me a lot better with an M60 up in the helicopter, because we added a big shot for that sequence," Snyder says. 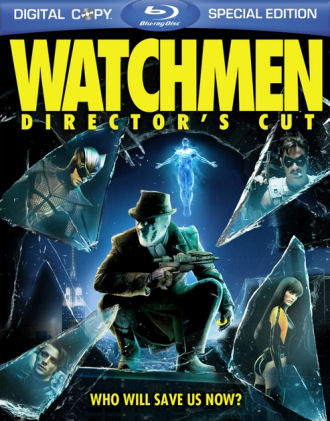 BD Live technology will also allow Watchmen fans to participate in a live commentary session with Snyder at a midnight screening scheduled for July 25 during Comic-Con International. Snyder will take questions from the live audience, and viewers can submit questions through their Internet-connected Blu-ray players.

"They have a room full of people taking all the questions," Snyder says. "Then there's another layer of people, because there's no way for me to see 10,000 questions come in at the same time. I'm sure there'll be one guy whose job is to say, 'OK, I'll field all the crazy questions.'"

The Watchmen: Director's Cut streets on July 21, the day before Comic-Con commences.